Although the ‘grueling march’ has been officially announced as being over, numerous obstacles lie ahead of North Korea in the 21st century. Its isolated economic structure can always spiral down into another crisis. Furthermore, it is still heavily reliant on foreign aid in meeting food demand, suggesting that a change in foreign relations or global food production could spark a new episode of famine.
While Kim Jong-il retains full political authority, many signs are visible that North Korea’s social control mechanism has loosened. In addition, North Korea has begun a high-stakes ‘game’ against the U.S. and the international community by pursuing a secret nuclear weapons program. 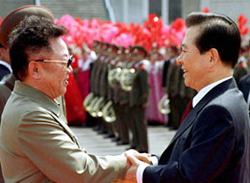 North and South’s leaders meet for the first time since the division of the Peninsula - June 13, 2000

One notable characteristic of North Korean foreign policy in the late-1990s and 2000s is its active approach to diplomacy with South Korea. This was reciprocated and amplified by the ‘sunshine policy’ pursued by South Korea. The 1998 visit to North Korea by Hyundai President Jung Ju-young and his gift of 500 head of cattle, as well as the inception of the Mt. Geumgang tour program, changed the paradigm of North-South relations. Also pursued was the Gaesong Industrial Complex project, which involves building an industrial complex in North Korea’s Gaesong region to combine the South’s capital with the North’s land and labor.

In the year 2000, President Kim Dae-jung paid an open visit to Pyongyang and met with Kim Jong-il to hold summit talks. The two leaders arrived at the ‘6.15 Joint Statement’, comprising five key principles :
△independent efforts for reunification,
△seeking out common ground in North-South views on reunification,
△meetings of separated families, and resolving the so-called ‘unconverted prisoners’ issue,
△active exchange and cooperation, and
△resuming North-South bilateral conversations. Projects such as the meetings of separated families and minister-level talks were discussed with enthusiasm, while channels of conversation between military and other authorities were opened. Also pursued were projects to reconnect railways in the west and east coast regions, as well as civilian-level interaction in the form of a Joint North-South Ceremony.

In addition, the participation of North Korean athletes and supporters in the 2002 Busan Asian Games further marked a significant improvement in North-South relations. Meanwhile, with more than a million South Koreans having visited Mt. Geumgang over the past six years, the tours have become a symbol of North-South relations. Fertilizer, food, and medicine provided by South Korea became an important factor in the North Korean economy, and South Korea surpassed Japan to become North Korea’s 2nd-largest trade partner after China. The North Korean economy is becoming more and more reliant on the South’s.

The stability of Kim Jong-il’s power did not translate into stability and growth for the North Korean economy. Innate limitations remained, while external factors worsened to further isolate the economy. The three-year long buffer period enacted in 1994 did not yield any significant results. North Korea still relied on foreign aid to meet domestic food demand, while relying heavily on China and South Korea for trade. The lack of capital, technology, and information made it difficult for North Korea to achieve economic growth on its own. The Shineuiju SEZ (Special Economic Zone) was proposed as a means to overcome such difficulties.

This was not the first special economic zone pursued by North Korea. A project to build a free trade zone (FTZ) in Hamkyung Province’s Najin port and Sonbong region was implemented in 1991 with the aim of transforming the zone into an international cargo relay point, export manufacturing center, as well as a tourist and financial hub. Despite the legal and institutional efforts made, the claustrophobic social atmosphere, inadequate infrastructure, and shaky credibility resulted in the project’s failure.

The Shineuiju SEZ was fundamentally different from the Najin-Sonbong FTZ. Kim Jong-il, during a visit to China, witnessed the local reform and opening-up that was underway. He reportedly remarked that ‘a whole new world’ was being created there. The Shineuiju SEZ is an ambitious project that came at a time when the ‘buffer’ plan had failed and the North Korean leadership had run out ideas. The blueprint for the zone was announced at a meeting of the SPA Permanent Committee on September 12, 2002. The zone was to be a de facto ‘state within a state’ similar to Hong Kong, being a ‘special administrative region’ with its own Minister.

Business activity and private property rights were to be fully observed. Located next to China and the Yellow Sea, the zone is highly accessible to foreigners and their capital. Amid international fanfare, the Chinese businessman Yang Bin was appointed as the zone’s first Minister. However, the Shineuiju SEZ project ran into trouble when Yang was arrested by China on corruption charges, and has been mired in inactivity ever since.

Although officially announced in 2002, the 7.1 economic reforms were enacted because Kim Jong-il had given orders to improve the management of the economy in October 2001. The reforms aimed to identify and correct flaws in economic management. In an attempt to overcome the chronic lack of supplies, prices and wages were adjusted according to the market-based system of supply and demand. The adjustment caused the prices of some items to jump several hundred-fold and wages to rise 20-fold. The authorization of ‘farmers’ markets’ enabled individuals to engage in commercial activity.

The reforms introduced a basic and strictly restricted form of market economy. Farmers’ markets in some regions evolved into larger-scale markets where transaction of virtually all kinds of goods took place. Factories, crafts shops, and farms now had to manage their own revenues and costs. Although still a socialist economy in principle, capitalist elements are gradually taking root in North Korea. 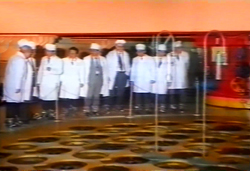 The Geneva Accord of 1994 had put the North Korean nuclear weapons issue momentarily on the back burner. However, suspicions of a nuclear program in Kumchangri brought the issue to the forefront again in the late 1990s. High-level talks between North Korea and the U.S. led to North Korea’s consent to a U.S.-led inspection.
Relations seemed to be in the process of recovery following the October 2000 visit to the White House by 1st Section Chief of the National Defense Commission, Cho Myung-rok, and a reciprocal visit to Pyongyang by Secretary of State Madeline Albright.

However, relations soon deteriorated with the launch of the George W. Bush administration. The U.S. constantly expressed doubt on North Korea’s compliance with the Geneva Accord, while North Korea denounced the U.S. for not providing light-water reactors as stipulated by the agreement. A visit to Pyongyang by a delegation led by Assistant Secretary of State James Kelly in October 2002 led to North Korea’s admittance of its secret nuclear program, bringing about the 2nd North Korea nuclear crisis. North Korea proceeded to scrap its official freeze on nuclear use, finally withdrawing from the NPT in October 1, 2003. To make matters worse, North Korea was suspected of using HEU (highly-enriched uranium) as well as plutonium to develop nuclear weapons.

North Korea was criticized for breaching the Geneva Accord by secretly pursuing the development of nuclear weapons even after the agreement was announced. In response, North Korea complained that the U.S. had strayed from the agreement as well, in that it failed to provide the light-water reactors.

The 2nd North Korea nuclear crisis led to a stalemate between North Korea and the U.S. North Korea hoped to directly engage the U.S., requesting concessions and regime security assurances in exchange for giving up its nuclear program. Meanwhile, the U.S. was reluctant to negotiate with North Korea, responding that there must be ‘no rewards for wrong actions’. A multilateral framework of conversation between the U.S., the two Koreas, China, Russia, and Japan was proposed as a way around the stalemate. China was appointed as the mediator state, and the 1st round of the six-party talks was held in Beijing in July 2003. After a 2nd and 3rd round of fruitless talks, the six-party talks saw a more than one-year period of inactivity before reconvening for a fourth round in late July 2005. 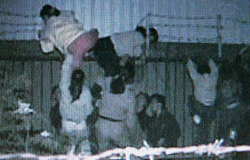 North Korea’s control over its society generally loosened during the ‘grueling march’ years. A prime example of this is the exodus of hungry North Koreans. Most of the refugees fled to China due to the famine, and those who were able headed for South Korea.
These so-called ‘economic refugees’ have become a human rights issue in the international community. Although not as full-blown in scale as the refugees that fled the East European communist states upon their collapse, a steady number of North Koreans continue to flee their country.