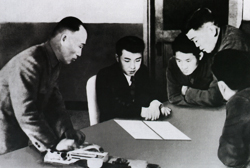 Although North Korea claims that the KWP (Korean Workers’ Party) was founded in 1925, the actual date the KWP was officially proclaimed is October 10, 1945. The provisional committees of the Korean Communist party in the five northwest provinces and the ‘zealot assembly’ were convened on this day for the proclamation. Celebrated in North Korea as a ‘socialist holiday’, the Congress convened that day led to the ‘declaration for the fortification of political views and organizational integrity’ that established the blueprint for the October 13th launch of the North Korean Branch of the Communist Party. This body was renamed the ‘North Korean Communist Party’ in April 1946.

1st and 2nd Party Congress (pre-North Korea Regime) - The Party Statutes did not clarify any ideology but merely set out the goals of establishing an independent state and enhancing the political/economical/cultural standards of living for the public in general.

3rd Party Congress (Apr. 1956) - Article 1 of the Party Statues was amended, specifying Marx-Leninism as the general ideological guideline for all Party activities. The operational objective of the party was to ‘accomplish the glorious task of implementing a nationwide democratic revolution against imperialism and feudalism’, to the ends of realizing the ‘final goal of building a communist society’.
4th Party Congress (Sep. 1961) - No substantial changes
5th Party Congress (Nov. 1970) - Party Statutes amended, replacing Marx-Leninism with Kim Il-sung’s ‘Juche (self-reliance)’as the Party’s guiding ideology.
6th Party Congress (Oct. 1980) - Kim Il-sung’s ‘Juche’ Ideology was rectified as the ‘monolithic’ ideology of the Party, while the ultimate goals of the Party were altered to ‘realizing Juche thought in every aspect of society’ and ‘building a communist state’.

Organization
In principle, the Party is governed democratically according to the general will of its members. Therefore, the body where the general will is heard (the Party Congress) is the highest deliberative authority in North Korea. Because the functions of the Congress are delegated to a permanent body called the ‘Central Committee’, it is this Committee that actually heads the Party. The Central Committee is made of the Politburo, which is the highest executive body in North Korea and the Secretariat. Working-level departments for organization/guidance, propaganda/agitation, external affairs, etc. are supervised by the Secretariat.

Operation
According to the Party Statutes, the Party operates under ‘the principle of centralized democracy’. The Party Congress is the highest deliberative authority. A strict chain of command runs from the Central Committee to party organizations and to their members. Power is delegated from the grassroots level to the Central Committee, which again delegates power to the Secretariat and then to the Politburo. Therefore, all power converges in the Chairman of the Politburo under a one-man rule.

The Chairman, being both the Secretary General of the Party and a member of the Standing Committee, exercises total control over the two key organizations. This is the institutional structure of North Korea’s one-man rule system.

The dominance of the Party’s role means that Party members enjoy many privileges in North Korean society. Raising one’s social status is virtually impossible without first becoming a Party member. Even the educational system is designed to train elite Party members.
Once mandatory education begins, a North Korea citizen must join the ‘Korea Youth Corps’(ages 7 to 13) and the ‘Youth Confederation’(ages 14~30), where he/she is indoctrinated to devote him/herself to the Party. According to one’s social background, skills, and personal volition, one first becomes a ‘candidate member’ of the Party before being elevated to ‘regular member’ status. The total number of Party members has changed drastically, according to changing political needs.

Growth in the Number of Party Members

Party committees on every administrative level are equipped with cadre training and re-education systems, whose purpose is enhancing the skills of Party members and the management of personnel. The highest central educational facility is the ‘Kim Il-sung Advanced Party School’. Admission is granted only to chiefs or higher-ranking officials of cities (zones) or counties.

Curriculums vary in duration from one month to five years. There is a communist university for each province, while each county has a Party school. All Party members must receive at least a month of mandatory re-education every year. Also operational are the ‘Korea Nodong Simmun (The Korean Workers’ Daily)’ and the ‘KWP Publishing Company’. These entities provide the media control needed for publicizing new Party directives as well as conducting the indoctrination, organization, and mobilization of the people.

In accordance with the rights of free congregation and association stipulated in the ‘Socialist Constitution’, various political parties and civil organizations exist in North Korea. In reality, all of these peripheral organizations are supervised and controlled by the KWP. There are the Social Democrat Party (founded in November 1945) and the Chondoist Chongu Party (founded in February 1946), both of which are ‘brother’ parties to the KWP.