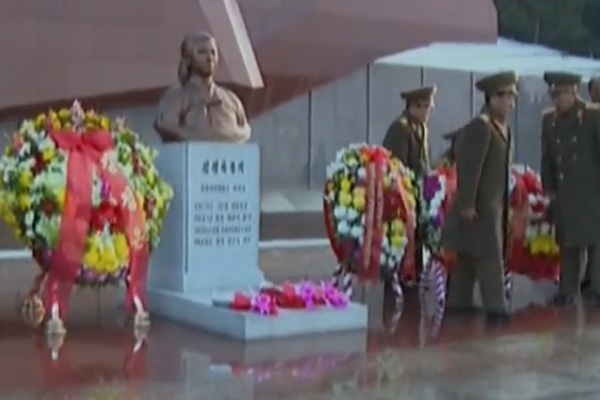 With Christmas just a week away, carols echo on the streets, where beautifully decorated Christmas trees have been set up. Families, friends and couples are busy making plans for the holiday, while some are extending a helping hand to neighbors in need. Indeed, Christmas is all about love, sharing and fun here in South Korea. So, how do people in North Korea spend Christmas? Let’s hear from Kang Mi-jin, a North Korean defector and reporter at the online newspaper Daily NK.

There’s no Christmas in North Korea. A whopping majority or 95 percent of North Korean people do not know what Christmas is. Religious events like masses or services are held only when it is necessary to show people from the outside that the nation allows religions. Even officials at cathedrals or churches vaguely know that Christmas is the day when Jesus was born, and have no specific information about the holiday.

While Christmas is enjoyed in various parts of the world, some countries do not mark the occasion at all. They include Muslim countries such as Brunei and Tajikistan, and Somalia where Christmas is prohibited by law on the basis that big crowds are prone to terrorist attacks. North Korea is also on this list.

There are churches and cathedrals in North Korea, but they hold services just as a formality. In reality, freedom of religion does not exist in the communist state. The North does not recognize Christmas which is rooted in Christianity, and most residents are unaware of it.

But North Korea does celebrate Christmas Eve or December 24th for different reasons. It is the birthday of Kim Jong-suk, the mother of former leader Kim Jong-il. Along with North Korea’s founder Kim Il-sung and his son Kim Jong-il, she is known as one of the “Three Generals of Baekdu Mountain.” According to Pyongyang’s state-run Korean Central News Agency, Kim Jong-suk was born in Hoeryong on December 24th, 1917, and died in 1949. She became widely known in North Korea after her son, Kim Jong-il, was officially appointed as the leader.

On December 24th, 1991, Kim Jong-il was named Supreme Commander of the Korean People’s Armed Forces at the 19th party plenum of the sixth Congress of the Workers’ Party. The appointment was celebrated in a big way because the day coincided with his mother’s birthday. In April of 1993, he was named Chairman of the National Defense Commission. Clearly, he was established as the nation’s next leader while his father Kim Il-sung was still alive.

Kim Jong-il was selected as party secretary in 1973 to become Kim Il-sung’s heir apparent. His appointment as Supreme Commander of the Korean People’s Armed Forces in 1991 enabled him to control the party and the military, the most powerful organizations in the regime, and effectively paved the way for the hereditary power transfer.

Kim Jong-il then idolized his mother as the female general of Mt. Baekdu who had joined Kim Il-sung’s anti-Japanese guerrilla force. Obviously, it had the purpose of acknowledging his legitimacy as the only son of Kim Jong-suk and the direct heir to succeed Kim Il-sung.

Various events have since been held on December 24th to commemorate Kim Jong-il’s designation as the Supreme Commander of the army and his mother’s birthday. Factories and enterprises as well as the military must join in the events, and those who fail to attend without specific reasons are often subject to self-criticism or punishment. The events are aimed at worshipping the Kim Jong-il family and therefore building a strong cult of personality. December 24th has also been regarded as an important day in the era of current leader Kim Jong-un.

A teaching material used in high schools in North Korea states that Kim Jong-un graduated from Kim Il-sung Military University on December 24th, 2006, and received his diploma directly from his father Kim Jong-il, with military commanders in attendance. It is known that Kim Jong-un was officially named successor on January 8th, 2009, but the textbook implies that he was introduced as the heir apparent about two years earlier, in December of 2006. At the time, it is said that then-leader Kim Jong-il told leading members of the military that December 24th would be a historic day if Kim Jong-un succeeded him. Apparently, the senior Kim wanted to celebrate his son’s graduation on that particular day, which was his mother’s birthday.

Kim Jong-un began to study military science at Kim Il-sung Military University in 2002. Four years later, in December of 2006, he received his diploma and badge from his father. After Kim Jong-il died on December 17th, 2011, Kim Jong-un emerged as the next leader.

At present, it doesn’t seem North Korea is preparing for any event related to the current leader on December 24th. But this day coincides with three different anniversaries for the three generations of the so-called “Baekdu bloodline,” which represents the legitimacy of the ruling Kim family.

While December 24th is of great political significance, scenes of the year-end season in North Korea are no different from those in other countries.

Around this time, North Koreans review the best and worst things they have done for the past year individually or in groups. This practice of reflecting on one’s life and tasks, and criticizing each other, if necessary, is called chonghwa(총화). During chonghwa, people ask themselves whether they broke other people’s hearts during the past year. If they think they did, they bury the hatchet and reconcile with one another. If they borrowed money from anyone, they pay what they owe before the year ends so they will not bring the old debt from the past year into the coming year.

North Koreans all belong to certain groups. In fact, they cannot stay away from groups or organizations from the cradle to grave. During the year-end season, North Koreans hold meetings in groups and hold the annual ritual of chonghwa to look back on the year. The practice of thinking about the past year and looking for ways to improve one’s life is not much different from South Korea, although the format of chonghwa may be rather unfamiliar to South Koreans.

The individual ways to wrap up the year in the North is even more similar to those in South Korea. Those who owe money pay back all the loans before the end of the year, while housewives wash their bedding and clean the house. Korean ancestors used to clear their debt on New Year’s Eve and clean their houses inside and out. It seems this tradition is still practiced in the North.

Now we wish that North Koreans will enjoy Christmas, just like people in other parts of the world.

I guess North Korea may take a step forward in religion. In the past, religious facilities never appeared in textbooks used in middle and high schools. But these days, some of those facilities are shown in textbooks so students can learn more about religion.

Also, religious people from the outside world often come to North Korea, while many religious groups provide aid to the North. In the process, the reclusive country might be thinking that it can no longer hush up religious activities. In this sense, I think North Koreans could find out about Christmas sooner or later.

Compared to the past, North Korea is opening up its society at a faster pace, raising hopes that North Koreans may share Christmas greetings some day.

In the grim reality, however, North Korea has threatened to send a “Christmas gift” to the U.S., amid their stalled nuclear negotiations. Unfortunately, tensions are likely to linger in the region around Christmas this year.

(Next week, we’ll learn about the Masik Pass ski resort in North Korea.)