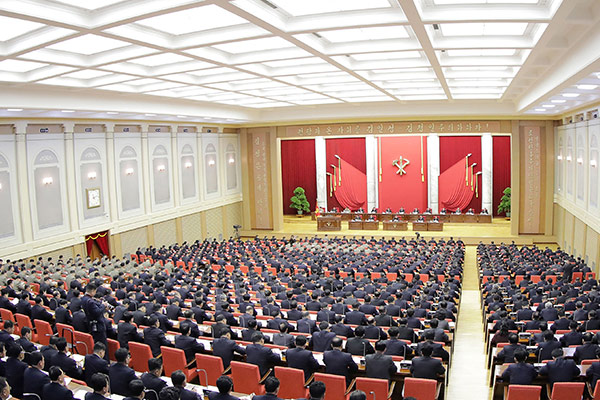 There is only one political party in North Korea, in contrast to most other countries that have adopted multi-party systems. Of course, there are some minor parties including the Korean Social Democratic Party, but they are subordinate to the Workers’ Party of Korea, which is North Korea’s de facto ruling party.

Today, we’ll learn more about the Workers’ Party of Korea, the heart of power in the communist regime, from Ahn Chan-il, a North Korean defector and head of the World Institute for North Korea Studies in Seoul.

North Korea has maintained a party-centered state system, where the party leads the state. The Workers’ Party of Korea or WPK is the sole ruling party in the North. Even in socialist states, power should not be centralized in the party. So, under the leadership of Lenin and Stalin, the great leader was not identified with the party. But in the years of Stalin, a cult of personality was fostered. As Stalinist-style structures were introduced in North Korea, which was occupied by the Soviet Union in 1945, North Korea built up a personality cult surrounding its founder Kim Il-sung. Accordingly, the party and its leader had equal status. In the North, the WPK has been regarded as the staff of revolution, while the party is the great leader and the great leader is the party. The WPK has maintained this party-state system to claim absolute status.

Established in 1945 with the goal of building a communist society, the Workers’ Party of Korea is the nation’s primary agency of political power. After major purges of Kim Il-sung’s opposition forces, the party became a political organ for his one-man dictatorship. That is, the WPK served as the leader’s tool, apart from its major function as a political party representing a particular social class. In 1970, the party revised its charter to support the leader’s juche, or self-reliance, ideology as its guiding philosophy.

After Kim Jong-il emerged as the new heir apparent in 1974, he highlighted the so-called Ten Principles for the Establishment of a Monolithic Ideological System to consolidate his father Kim Il-sung’s one-man leadership. At the party delegates’ conference in 2010, Kim Jong-il’s son, Kim Jong-un, was officially named successor. In this way, the WPK played a leading role in facilitating the third-generation hereditary power transfer. Mr. Ahn now explains how the party operates.

As the party’s highest body, the Congress is supposed to be held every five years. In between congresses, the party’s Central Committee oversees all party affairs. After the sixth Congress in 1980, no congresses were held during the era of Kim Jong-il. It was not until 2016 that current leader Kim Jong-un held the seventh Congress. North Korea has operated the party through the Organization and Guidance Department under the party.

In principle, the Congress is the party’s highest decision-making body that revises its charter and sets basic policy direction. But in practice, it is seen as a rubber stamp for decisions made by the party’s Central Committee, which is, therefore, the most powerful organization within the party. Currently, leader Kim Jong-un is the chairman of the committee. Another party organ, the Central Military Commission, organizes and guides all military projects in accordance with the party charter. The Korean People’s Army belongs to the party, not to the state, and Chairman Kim controls the government, military and social organizations. The screening process to select members of the all-powerful party is very rigorous.

Those who hope to get party membership should have no problem in their class status. When their family history is screened, it dates back to the Japanese colonial era. Those with a Christian minister, landlord or capitalist in their family background, who belong to the so-called “hostile class,” cannot enter the party. It is relatively easy for soldiers to become party members. Still, party members do not surpass 20 percent and 40 percent of general military units and Special Forces units, respectively. That means wearing a military uniform does not automatically make soldiers party members. In North Korea, party membership is a sort of qualification to join the elite.

The Workers’ Party has three million members, about one-seventh of North Korea’s total population. While the proportion is the highest in the world, not anyone can become a party member. Those in the “hostile class” are not allowed to enter, no matter how smart they are.

Those who obtained party membership, on the other hand, are on the threshold of promotions and power. Once they manage to join this mainstream, they can stay there for a long time. Former leaders Kim Il-sung and Kim Jong-il rarely replaced high officials in order to encourage them to show greater loyalty. It is easy to imagine that those in the North Korean power elite are of an advanced age.

Since Kim Jong-un came to power, however, a change has been perceived in the party.

The WPK has different departments in charge of organization and propaganda, international affairs, military and the economy. On the occasion of the seventh Congress on May 6th, 2016, there was a major shakeup in these organizations. Leader Kim Jong-un pushed for downsizing the Workers’ Party and the government last year, saying that one out of three high officials who live idly in Pyongyang should be relegated to less important posts in local regions. Obviously, he sought to streamline the party and the government. Actually, a 70-something Premier of the Cabinet was replaced by Kim Jae-ryong in his 50s last year—a very unusual personnel reshuffle. On a similar note, many military commanders were replaced by those in their 50s or younger.

Last year, vice chairman of the Workers’ Party Choe Ryong-hae replaced Kim Young-nam, president of the Presidium of the Supreme People’s Assembly. In fact, the possibility of Kim’s resignation had often been mentioned in recent years. Born in 1928, Kim had held the position of the nominal head of state for decades. In addition, those in the new generation under the age of 60 began to hold key posts, while the military replaced more than 30 percent of commanders who were mostly in their 70s and 80s. The personnel changes signal a major overhaul of the Workers’ Party.

I imagine Kim Jong-un has recognized the need to keep up with international trends so the Workers’ Party can continue to govern the nation. It is important that the young leader finds it necessary to reform the party in order to change the state and military systems. North Korea’s socialism has already lost steam. The leader probably felt a sense of crisis that without streamlining, the party might face a similar fate to that of communist parties in the Soviet Union and Eastern Europe. The North Korean leader’s perception can be evaluated positively.

While former leader Kim Jong-il advocated “military-first” politics, his son and current leader Kim Jong-un threw his weight behind the Workers’ Party from his initial years in office. He is seeking to blow a new wind into North Korean society by embracing the younger generation, while still solidifying the status of the party. It remains to be seen how this new attempt will turn out in the year 2020.