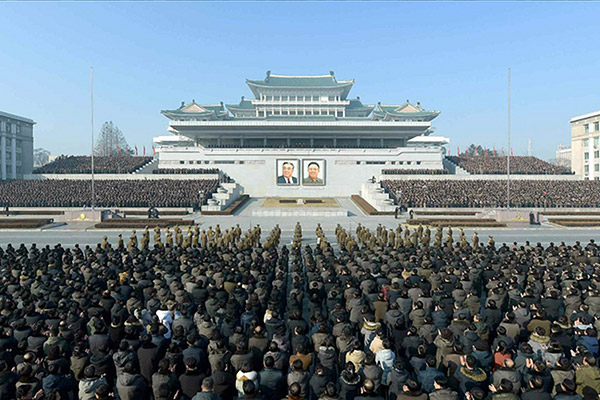 Since humans are social animals, they form groups to fulfill their joint purposes or share the same hobbies. In general, a group life guarantees autonomy, except under special circumstances.

But it is said that there is no freedom in communal living in North Korea. Residents in the North are required to join certain groups and their organizational lives are strictly controlled. Why does the communist regime place so much emphasis on groups? Today, we’ll learn about organizations in North Korea from Professor Chung Eun-chan at the Institute for Unification Education.

North Korean people between the ages of seven and 65 are all obliged to join particular political organizations. A group called the Korean Children’s Union admits children aged between seven and 13, and young people from the ages of 14 to 30 are members of the Youth League.

Afterwards, residents belong to different groups in accordance with their occupations. For instance, laborers, office workers and public servants are expected to join the General Federation of Trade Unions of Korea, while farmers enter the Union of Agricultural Workers of Korea. Housewives more than 30 years old become members of the Socialist Women’s Union.

So, those who do not belong to any group in North Korea are children under seve, old people over 65 and critically ill patients. In the communist state, all citizens must join certain groups, wherever they are and whatever they do. It is easy to imagine the groups have many members. Presumably, three million children are included in the Korean Children’s Union, and as many as five million young people join a youth organization called the Kimilsungist-Kimjongilist Youth League. It is also assumed that the General Federation of Trade Unions of Korea and the Union of Agricultural Workers of Korea have 1.6 million and 1.3 million members, respectively, while the Socialist Women’s Union consists of 200-thousand people.

These organizations play a role in executing guidelines of the Workers’ Party of Korea as extra bodies of the ruling party. The Youth League, among others, is by far the most important group.

The Youth League has spearheaded efforts to maintain the North Korean regime for over 70 years. The country has actively used young people for propaganda with the purpose of boosting the economy. For example, they have taken the lead in mass mobilization campaigns aimed at increasing productivity such as the “200-day battle” and “70-day battle” and have also been sent to work in various areas including construction, mining and forest farming. Through this key political group, which is the youth wing of the Workers’ Party, North Korea has mobilized a large number of people to organize and promote the so-called “speed battle” and created youthful heroes to uphold the regime.

Founded in 1946, the Youth League has been the vanguard of North Korea’s socialist revolution. On the economic front, its members have been mobilized to work, whenever necessary, in the name of the Speed Battle Youth Assault Troops. Their labor was used to build roads, railways and power plants across the nation. A 12-lane, 46-kilometer-long expressway between Pyongyang and Nampo is called the Youth Hero Motorway, indicating that a number of young people were used to construct it.

North Korea controls the organizations, an important means of sustaining the regime, through a self-criticism practice called saenghwal chonghwa, which is roughly translated as group discussions of daily life.

In the self-criticism sessions, members of a group stand in front of each other to reflect on their negative behavior during the past week and how to improve their lives. In addition, they have to criticize one of the group members for various personal failures like being late to the office, sleeping during class or finding fault with teachers. The person who is subject to criticism must stand up when his or her name is called. While listening to the criticism in the presence of others in humiliation, the person decides to watch how the critic will be doing in the coming week. Next week, it’s the person’s turn to criticize any wrongdoings of the very member who criticized him or her the previous week.

So why did North Korea create such a strange system? The purpose is to make people check each other and watch for who is loyal or disloyal to the party so that the society can be centrally controlled.

In North Korea, offices workers must take part in a weekly life review session every Saturday and farmers attend a similar session every ten days. College students and those working in the culture, art and science areas have to participate in the self-criticism sessions even more frequently, every other day.

Those who do not attend the regular sessions intentionally are criticized severely in public and suffer from disadvantages in college admissions or promotions at work. The strict self-criticism practice has the purpose of promoting the personality cult of the ruling Kim family and strengthening loyalty to the party.

As time goes by, however, organizations may weaken, no matter how strong they are. That is the case with North Korea, which underwent extreme economic difficulties in the 1990s.

Many North Korean residents became dependent on private markets or jangmadang for their livelihood, and they often bribed officials to skip the self-criticism sessions. Those in the younger generation, in particular, are not very responsive to this practice, even though they may attend the sessions.

Those who were born after the mid-1990s in North Korea are called the new generation, the jangmadang generation or the Arduous March generation. They are definitely different from older generations. They can access outside information if they want, although the channels are unofficial. Of course, they are taught to follow party instructions from childhood and they pretend to obey them. But inside, they believe they should earn money and admire the outside world. So, there is a big gap between their actual perception about or attitude toward group life and the organizations’ original purpose to control them.

Since the economic hardships, the lives and perceptions of North Korean people have been changing. But it doesn’t mean the nation’s organizations have collapsed.

On the contrary, more focus has been placed on organizations since Kim Jong-un came to power. On the foundation day of the Korean Children’s Union in 2012, which was Kim’s first year in office, the leader invited the union members from across the nation to Pyongyang, mobilizing buses, trains and even planes.

The Youth League congress, which had never been convened during the years of former leader Kim Jong-il, also took place in 2016.

For North Korea, controlling people through organizations is essential to maintaining the regime. The Korean Children’s Union is the first political organization that North Koreans join in their lives. North Korea’s founder Kim Il-sung never failed to attend the annual event commemorating the union’s foundation until his death. Current leader Kim Jong-un has participated in the same event every year. North Korea uses this underlying organization to reinforce internal unity.

We cannot understand North Korea’s organizations if we look at them by normal standards. Unlike other socialist or dictatorial regimes, North Korea is a highly-regimented, strictly controlled society, in which the leadership has been extended through three generations over the last 70 years.

The North has controlled its society through organizations for over seven decades. With the importance of regime maintenance in mind, Kim Jong-un is putting greater emphasis on organizational control than ever before.

However, the younger generation in the reclusive state has already been highly exposed to information from the outside world, and it is uncertain whether North Korea’s tight control grid will continue to serve its intended purpose.