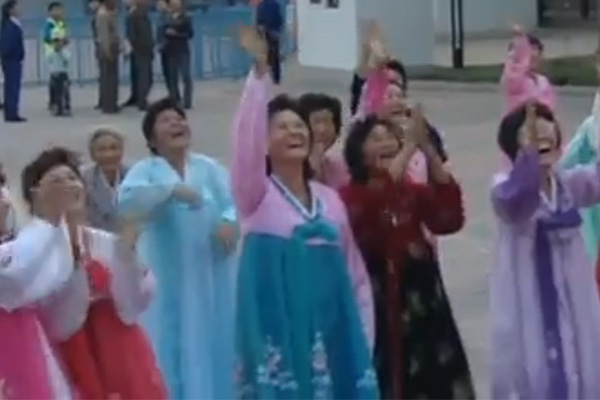 There is no seolbim culture in North Korea. In the North, hanbok is typically worn on special occasions such as political events, weddings, and parents’ 60th, 70th and 80th birthdays. Only a few families, where something traditional is considered important, dress children in hanbok and let them bow to elders on Lunar New Year’s Day.

North Korea abolished Lunar New Year’s Day or Seollal in the 1960s in the name of eradicating feudal practices. But Seollal was revived in 1989 under the instruction of former leader Kim Jong-il in a move to ease public discontent over economic difficulties. From then on, family members have gotten together on Lunar New Year’s Day to share delicious food and enjoy traditional folk games like kite-flying, shuttlecock-kicking and yutnori or four-stick board game.

Many South Koreans here wear seolbim to perform an ancestral memorial rite in the morning of the first day of the Lunar New Year. This practice is not common in the North. But it doesn’t mean North Koreans think little of hanbok. On the contrary, they attach special meaning to the traditional clothing.

For women, hanbok consists of jeogori and chima, which refers to the jacket and skirt, respectively. While the form has changed a little over time, the traditional attire is rooted in daily clothes worn by people in the Jeoson Dynasty. This is why the two-piece garment is known as Joseon-ot(조선옷) or Joseon clothes in North Korea. North Koreans are highly proud that they have long upheld the spirit and tradition of the Joseon people. They wear Joseon-ot on happy occasions such as birthdays of former leaders Kim Il-sung and Kim Jong-il and also the birthday of Kim Jong-il’s mother Kim Jong-suk. On national holidays, current leader Kim Jong-un’s wife Ri Sol-ju appears dressed in the traditional costume, reflecting that North Korea has respect for joseon-ot.

North Korea calls the traditional clothes “joseon-ot” to highlight the Korean ethnicity. Former leader Kim Jong-il encouraged women to wear it, saying that women’s chima and jeogori are definitely worth showing off to the world.

North Korean hanbok often uses the color white that has traditionally been favored by Korean people for its symbolism of a pure spirit. My grandmother would wear a white jeogori made of cotton or silk and a black skirt—the typical clothing worn by women during the Joseon kingdom. It became the uniform of female university students in the early- to mid-2000s. I think North Korea emphasizes the nation’s ethnicity in this way.

While female university students are supposed to wear the hanbok uniform, men in North Korea rarely wear the traditional outfit. Many think that hanbok looks better on women than men. Also, men’s hanbok reminds people of legendary independence fighter Kim Koo, who always dressed in hanbok. He opposed the establishment of separate governments in North and South Korea and was therefore against North Korea’s founder Kim Il-sung. Men in North Korea have been reluctant to wear hanbok because it might imply they are against the Kim Il-sung regime.

In contrast, women regard hanbok as something to be proud of, something to be worn on special occasions. They wear hanbok at important government and family events like their weddings and seniors’ 60th birthdays. So, how do they prepare for this must-have item?

Under the previous rationing system, the North Korean people were provided with everything—food, shoes and clothes including hanbok. They had to receive them, whether they liked them or not. But these days, they go to private markets or jangmadang and choose their favorite color and design when buying hanbok.

Hanbok prices vary, depending on the quality and design. Hanbok pieces made in China using South Korean designs and fabrics are very expensive, costing about 3,000 US dollars. But much more affordable ones are available for 20 dollars. Those who have become better off are willing to get premium, high-priced products.

In the past, North Korea distributed clothes, including hanbok, to the people. But the state rationing system collapsed in the mid-1990s due to the extreme economic contraction. Nowadays, people purchase hanbok at the jangmadang. In general, hanbok is more expensive than ordinary clothes. People who can’t afford to buy hanbok often rent it, as those who do not wear it at important events are positioned in the back rows. North Koreans also give special meaning to hanbok patterns.

In North Korean hanbok, flower patterns are often added to the sleeves and the skirt. The vivid floral patterns make the hanbok look more splendid and represent great joy and happiness.

Hanbok is a sort of formal dress reserved for important days, and flower patterns embroidered on it symbolize delight and blessings. Silk from Yongbyon in North Pyongan Province is the most famous hanbok fabric. Known for the emotional poem Azaleas by renowned poet Kim So-wol, the North Korean town of Yongbyon is also well known for its silk featuring azalea flower patterns.

North Korea has promoted the use of hanbok more actively under the rule of Kim Jong-un. In a major shift, it has been worn by men as well.

Since the mid-2010s, more and more parents have dressed their children in hanbok. Not only children but men have also put on the traditional attire. Photos of Lunar New Year’s Day and some events in Pyongyang in 2016 and 2017 show a lot of people, from kids to senior citizens, including men, wearing hanbok.

North Korea is obsessed with old traditions to sustain its own ethnicity, which it believes enables the small, weak country to withstand harsh international sanctions. Its national pride is well seen in a song entitled Koreans are one of the Greatest Peoples in the World. In this context, the North is expected to continue to encourage people to wear the traditional clothes.

During the Lunar New Year holiday last year, North Korea’s Rodong Sinmun newspaper showed clothing stores crowded with people preparing for seolbim and children jumping rope, dressed in hanbok. North Korean men once avoided hanbok but some have chosen to wear it for their weddings lately.

It seems North Korea is promoting the spread of hanbok in a bid to strengthen internal unity by underlining ethnicity and independence amid strong international sanctions.

(Next week, we’ll talk about motorbikes in North Korea.)