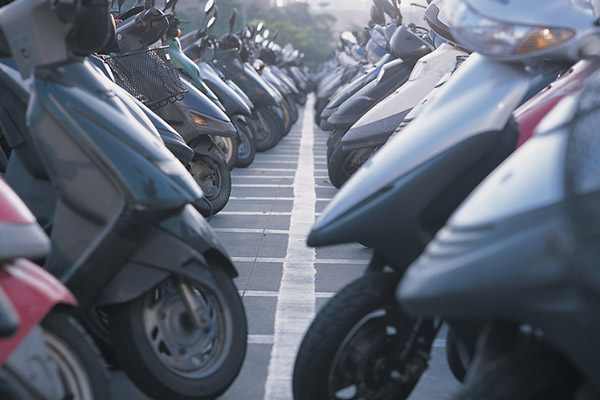 If became better off and had some extra money, what would you like to change first? People in countries that have achieved economic development often change their transportation means. China, for example, saw an increasing number of people choosing to ride motorbikes when the nation began to carry out the policy of reform and openness. Vietnam, which has enjoyed fast economic growth, is called “motorcycling heaven.” It is said that more and more motorbikes have appeared in North Korea, as well. Today, we’ll discuss the implications of the growing number of the two-wheeled vehicles in the northern part of the Korean Peninsula with Kang Mi-jin, a reporter at the online newspaper, Daily NK.

Only seven years ago, motorbikes in North Korea mostly belonged to the police and wealthy people. But these days, even a noodle shop uses a scooter for delivery. The revised enforcement regulations of the road traffic act in 2017 stipulate private motorcycle registration, meaning that individuals are allowed to purchase motorbikes as long as they have money. Photos of North Korea show that a lot of motorbikes are found all across the country.

Ms. Kang is a North Korean defector who lived in Hyesan City, Ryanggang Province, before she escaped from the country in 2009. She said she was surprised to see photos of so many motorbikes in North Korea because they were previously only supplied to police stations and the special task force under the Ministry of People’s Security. In a word, the vehicle was a symbol of power, as far as she remembers.

North Korea prohibited individuals from possessing and riding motorbikes until the 1990s. The North permitted private ownership of motorcycles in 2012, banned it in 2014 and permitted it again the following year. Since the revision of the relevant law in 2017, the number of motorbikes has been increasing fast. The main reason is the nation’s private market or jangmadang.

Around 2014 to 2015, North Korean people felt that the government had no control over the jangmadang so they could and should do something to use the market. Motorbikes were an ideal vehicle for small dealers to commute to and from the market quickly, as they couldn’t use cargo trucks to travel short distances each time.

The government, for its part, didn’t bother to control individual motorbike use because there was no need to improve the nation’s poor road and railway infrastructure but people were still able to earn money easily and offer something in return to the state. By allowing motorcycle use, the Kim Jong-un regime could let people live well and collect money from them. That’s why the number of motorbikes rose quickly.

A report shows that private economic activities account for 80 percent of the household economy in North Korea, indicating the flourishing jangmadang in the communist state. And motorbikes are used to carry goods and passengers to the jangmadang.

Passengers may use motorcycles when traveling short or medium distances within 100 kilometers, and the fare is similar to that of taxis. When citizens order the cold noodle of naengmyeon, kimchi or liquefied petroleum gas, motorbike transporters called “bullet deliverymen” deliver the goods. Products on the North Korean online shopping website known as “Okryu” are also delivered to customers through the motorbike delivery service.

In this way, motorcycles, which were once banned in North Korea, have now taken root as an important means of transportation. So, what kinds of motorbikes are traded in the North?

Some motorbikes produced in China can run in shallow water without engine troubles. They cost 4,000 to 5,000 Chinese yuan, which is around 700 US dollars. Two-or three-seater motorcycles are quite expensive, priced at 2,500 to 3,500 dollars. More affordable, second-hand Chinese models are about 600 dollars.

In North Korea, Chinese motorbikes and locally-made ones are traded at the market. North Korean authorities import the products directly from China or bring in Chinese facilities and technology to produce the vehicles in a factory in Pyongyang. Among bikes under 125cc, 250cc and 400cc, the medium 250cc models from China are favored by North Korean men. It is said that registration fees for bikes in North Korea are very costly.

Those who get new bikes in the North must receive registration plates from local police stations. They need to get the plates issued quickly in order to start their business right away. But officials often drag their feet, asking the applicants to fill out forms and come again later. Of course, they are demanding bribes. The applicants have to give some bribes to get their registration paperwork done quickly. If the officials take issue with something again, the applicants have to provide even more.

Motorbikes are considered as a must for certain businesses in the North but they also have the side effect of encouraging corruption in the registration process.

The Ministry of People’s Security is in charge of motorcycle registration, including the issuance of license plates, and registration fees are 300 to 500 dollars. But those who fail to get the registration plates even after offering bribes often purchase fake driving licenses and plates for 100 dollars in order to avoid the crackdown.

While corruption and irregularities are rampant in motorcycle registration, motorbikes have now become indispensable for economic activities in the North. The vehicles are expected to bring a major change in people’s lives.

Once a symbol of intimidating power, motorbikes have now been used in everyday life. They are expected to help private businesses and the markets thrive. In the past, transport vehicles called “servi-cha,” meaning “service car,” would be on standby for a couple of days before departing for a certain destination, waiting for 50 to 60 passengers to fill the vehicles. But filled with one or two persons, motorbikes can leave at anytime. Using the servi-cha, traders typically need a few days to shuffle goods between manufacturers and markets. But if traders find something missing at the market in the morning, they can bring them back in the afternoon by using bikes. For private traders, motorbikes have now become one of life’s daily necessities.

Motorbikes have permeated deeply into North Korean people’s lives. In line with the spread of cell phones and rising purchasing power in big cities, bikes will likely contribute to the rapid development of the nation’s transport business.