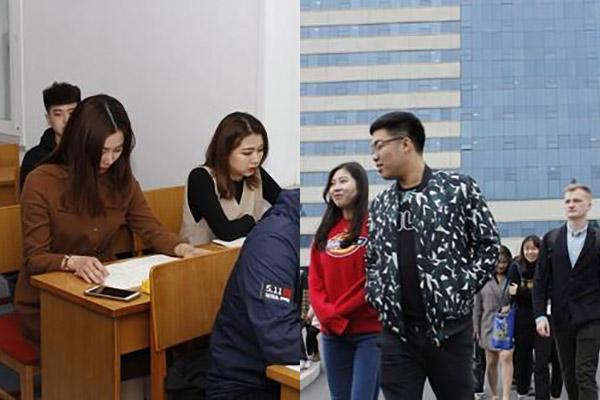 Early this year, a group of students from North Korea’s Kim Il-sung University attended a winter vacation program at Germany’s Free University of Berlin. They were seen chatting with local students in fluent German. With permission from the German government, the North Korean students arrived in Berlin on January 4th. The visit came after the North Korean and German universities signed a memorandum of understanding in 2018 to promote academic exchanges that have little to do with the international sanctions on North Korea. It looks like students in the North are allowed to study abroad, like those who took part in language training in Berlin.

North Korea has sent students abroad since the years of Kim Il-sung. The nation has encouraged young students to study and learn advanced culture in other countries so that they could contribute to maintaining and developing the communist regime. In doing so, North Korea has been able to train talented individuals.

For parents or students, studying abroad means a higher possibility of having a successful career, leading a more decent life and joining the power elite. That’s why many prefer to study in other countries and enhance their individual capabilities. Of course, only those with proper family backgrounds are entitled to study overseas.

There are no exact figures on North Korean students abroad. But a UNESCO report shows that more than 1,400 North Koreans were studying in various parts of the world in 2012. According to the report, the most preferred destination for studying was Russia, followed by India, France, Australia and Canada. But in reality, North Korea sends the largest number of students to China, although it is not specified in that report. Last year, the Chinese Embassy in North Korea showed on its webpage that about 400 North Koreans go to China every year for bachelors, masters or doctoral degrees or for training courses.

The North sent some 300 scientists to Russia from the mid-1990s to let them learn theories and technologies related to nuclear weapons.

At the 14th National Conference of Teachers held in Pyongyang on September 3rd, 2019, leader Kim Jong-un said that the nation needed scientists who studied abroad for missile and nuclear development. He advocates missiles and nuclear weapons, calling them a “treasured sword” that ensures the security of the regime. In this light, many North Korean students have been sent abroad to study natural sciences, engineering, medical science or new technologies.

So Sang-guk earned his doctoral degree before he was 30. After returning home from the Soviet Union, he wrote some 40 books and 100 papers. He played a key role in test-firing North Korea’s first long-range rocket carrying the Kwangmyongsong-1 satellite in 1998. For this achievement, he received the nation’s most prestigious award, the Kim Il-sung Award.

Many others who studied in socialist states, including the former Soviet Union, were able to rise to important positions in North Korea. In fact, a considerable number of high-ranking officials have academic experiences abroad. They include former president of the Presidium of the Supreme People’s Assembly Kim Yong-nam and former secretary of the Workers’ Party Central Committee Kim Ki-nam.

As studying abroad provides a chance of success in life, those who hope to study in other countries have to pass the rigorous screening process. Even after being selected, they must follow strict rules.

In North Korea, not everyone can study overseas. For candidates, family backgrounds are most important and their academic abilities should be proven as well. Also, they are not allowed to study abroad if any of their family members or relatives reside overseas. All these requirements should be met. Naturally, children from high-ranking families are mostly chosen.

Once selected, they receive language training at Pyongyang University of Foreign Studies for six months. In addition, they must attend the ideological education session. After they arrive in a foreign country, their passports are kept at the North Korean embassy in that country. If they get poor grades in school, they are sent back home immediately. That’s why they throw themselves into studying. In fact, North Korean students in domestic universities cannot advance to a higher grade if they get a C in three subjects in their final exams.

North Korean students studying abroad are mostly children of government officials. Their family backgrounds are examined thoroughly and they should showcase their abilities in particular areas.

Even if they are fortunate enough to be allowed to study overseas, a privilege given to only a limited number of people, they are still strictly monitored by the North Korean authorities. Three months before going abroad, the students are required to swear loyalty to the dear leader at the International Affairs Department of the Workers’ Party. Their foreign lives are not free at all, because students are supposed to monitor each other.

There are exceptions, of course. Professor Chung now explains the case about the so-called Baekdu Bloodline of the ruling Kim family.

While general citizens are restricted from going overseas to study, members of the ruling Kim family all studied abroad.

Leader Kim Jong-un, for example, attended public schools in Bern, Switzerland, where he went under the name of Pak Un(박운) and also used a fake Brazilian passport, in which he was presented as “Josef Pwag.” While staying in Switzerland for four years, he is believed to have traveled freely to different parts of Europe as a diplomat and enjoyed various experiences.

Kim Jong-un is said to have enjoyed a free school life and loved to play basketball in Switzerland. Since the initial years of his rule, Kim has actively encouraged students to go to foreign countries for studying, as part of efforts to nurture young talents.

In the past, North Korea selected brilliant students and let them study overseas at the government’s expense. But these days, some people spend their own money to study abroad.

During the years of former leaders Kim Il-sung and Kim Jong-il, the state supported all the students studying in foreign countries. Under Kim Jong-un’s rule, however, the state can’t afford to pay all the expenses for students overseas. As a result, more than half of North Korean students in foreign countries pay for their own expenses. In other words, the nation’s worsening financial situation forces the state to place an economic burden on individuals for foreign school expenses, which it had paid in the past. These days, some people can study in foreign countries if they have connections with party officers and meet basic requirements.

It remains to be seen whether North Korea will increase the number of students studying abroad, as the number reflects the nation’s commitment to going global and opening up its society.