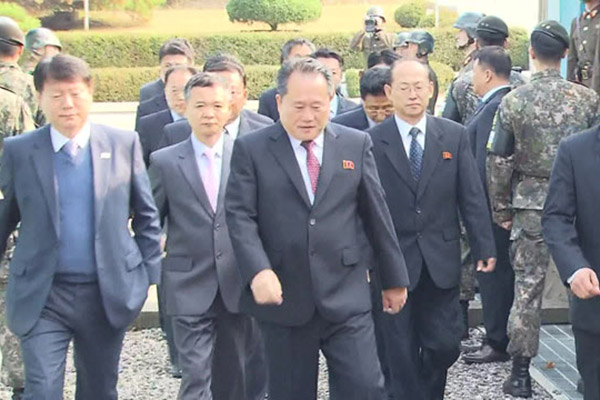 North Korea recently replaced its top diplomat. A career diplomat, Ri Yong-ho, was replaced with the former head of the National Committee for the Peaceful Unification of the Fatherland Ri Son-gwon.

This significant change in the foreign ministry leadership drew attention to North Korean diplomats and prompted questions such as who gets appointed to represent the country and what their duties are. Here’s Professor Jeong Eun-chan of the Institute for Unification Education to answer those questions.

North Korea does not have national government exams like South Korea. The North’s diplomats come from a pool of elites who graduate from Pyongyang University of Foreign Studies and Pyongyang Foreign Language Institute. Only those who don’t have any family members, immediate or distant, living abroad, who have their backgrounds checked out and whose loyalty to the party and regime remain unquestioned are selected to serve in the Foreign Ministry.

According to a website operated jointly by the U.S.-based National Committee on North Korea and the East-West Center affiliated with the University of Hawaii, North Korea has diplomatic relationships with 161 countries. North Korea’s Foreign Ministry, established in 1948, enjoys quite a prestigious status within the country, so much so that the late Kim Jong-il placed it directly under his control in 1982. Everyone aspires to be a diplomat, but not everyone can become one. Their background must be spotless and capabilities proven. They are elites who are taught foreign languages from childhood. The person who best exemplifies this rigorous selection process is North Korea’s First Vice Minister of Foreign Affairs Choe Son-hui(최선희).

Vice Minister Choe Son-hui is known as an expert on the U.S. Her actions and words have been used to gauge Pyongyang’s relations with Washington.

She is also the foster daughter of former North Korean Premier Choe Yong-rim(최영림), who had been a member of the regime’s inner circle since Kim Il-sung was in power. With the help of her stepfather, Choe attended all the prestigious schools in North Korea, where she became friends with members of the ruling Kim family.

Her personal ties with the Kim family and educational background helped her land a job at the Foreign Ministry right after graduating from Pyongyang University of Foreign Studies. Surprisingly, she later studied English in the capitalist country of Malta. It shows that she was systematically groomed for the job. She is very fluent in English and Chinese and known to have quick and sound judgement, characteristics which helped her stand out as she worked as an interpreter for major international talks and nuclear negotiations since the late 1990s.

As the stepdaughter of the much-trusted Premier Choe Yong-rim, Choe Son-hui attended the same middle school as the children of the Kim family and powerful elites and went through all the necessary stages to becoming a key foreign ministry official.

Another well-known powerful diplomat in North Korea is Kang Sok-ju(강석주), the First Vice Foreign Minister who played a pivotal role in concluding the Geneva Agreed Framework, a nuclear agreement that froze Pyongyang’s nuclear program in 1994. He studied in Moscow after graduating from Pyongyang University of Foreign Studies. Following Vice Minister Kang Sok-ju was Kim Kye-gwan(김계관) in the 2000s, who also studied at the same university. Their rigorous training made them knowledgeable in foreign affairs and global relations, but their actions in the international community have been noticeably aggressive.

North Korean diplomats serve their nation in a different way than those from other countries.

They are often ostracized and disparaged in the international community. When the North was sanctioned by the U.N. for conducting six nuclear tests since Kim Jong-un came to power, it was North Korean diplomats who were leading the protest against the international sanctions.

That is why the North’s diplomats were considered to be the regime’s warriors and defenders, and why they had to act and talk aggressively on behalf of the communist regime, even going against diplomatic protocols followed by other foreign officials.

North Korean diplomats are aggressive enough to deserve the title “diplomatic warriors.” In order to carry out the instructions from the North Korean Workers’ Party, they argue on behalf of the regime with their ears and eyes closed to international sanctions and criticisms. Their actions are part of North Korea’s diplomatic strategy to maximize national interest by developing a nuclear arsenal and prodding two superpowers – the United States and China.

Their most well-known tactic is “brinksmanship diplomacy,” or pushing a situation to the brinks of extreme conflict. This tactic was employed by Choe Son-hui last December when she called U.S. President Donald Trump a ‘dotard’ and blamed Washington for stalling the bilateral nuclear talks. North Korean diplomats’ blatant and inappropriate actions, like the public denouncement of a foreign leader, are bound to draw criticism from the international community.

Sometimes the diplomats are even involved in criminal activities. Professor Chung explains more.

North Korean diplomats get involved in criminal activities, because they do not receive enough financial support from their home country. Even though being a foreign ministry official is one of the most coveted jobs in North Korea, their monthly pay is only between 500 and 1,000 dollars.

A typical North Korean laborer gets about 3,000 won a month, which comes to far less than one U.S. dollar at the exchange rate of 8,000 North Korean won for a dollar. So, a monthly salary of 500 to 1,000 dollars is huge for ordinary North Koreans, but far too little for diplomats who have to live abroad. So the North’s diplomats capitalize on their diplomatic immunity and make extra money by smuggling.

Also, they’re ordered to make “loyalty payments” to Pyongyang without any other support from the government, leaving them no other resort than to get involved in illegal acts or seek refuge in South Korea.

North Korean diplomats get paid far more than ordinary workers, but not enough to lead a comfortable life overseas. They usually live on the upper floors of the embassy since they cannot afford to have separate residences.

Despite such tight financial situations, North Korean legations in foreign countries have to send an annual “loyalty fund” to Pyongyang. Diplomats are forced to engage in illegal activities as arms trading, drug smuggling, and counterfeiting. A 2017 report by the Global Initiative Against Transnational Organized Crime exposed the crimes committed by North Korean diplomats, claiming that the ones possessing diplomatic passports were involved in more than 18 smuggling cases of rhino horns and elephant ivories over the past 30 years.

Their situation is made more difficult by the foreign governments that cut down the number of North Korean diplomats in their countries as part of implementing U.N. sanctions against the communist regime. Professor Jeong Eun-chan tells us more about the plight of the North’s diplomats.

Several countries are cutting the number of North Korean diplomats. Moreover, the deportation of high-ranking North Korean officials is used by foreign governments to express their denunciation of the Kim Jong-un regime that keeps conducting illegal nuclear and missile tests.

For instance, 15 officials used to work at the North Korean Embassy in Kuala Lumpur, Malaysia until 2016, but that number was cut to ten in 2017. Malaysia is where Kim Jong-un’s older half-brother Kim Jong-nam was assassinated in February 2017. Countries with North Korean legations have been reducing the number of diplomats from Pyongyang since 2017. This downward trend continued into 2019 and is likely to continue in 2020 as well.

Diplomats represent a country’s standing and reputation in the international community. However, North Korean diplomats are compelled to work as the regime’s mouthpiece and make extra money for their government. As long as they continue to perpetrate illicit activities, they won’t be able to win the trust of the world.