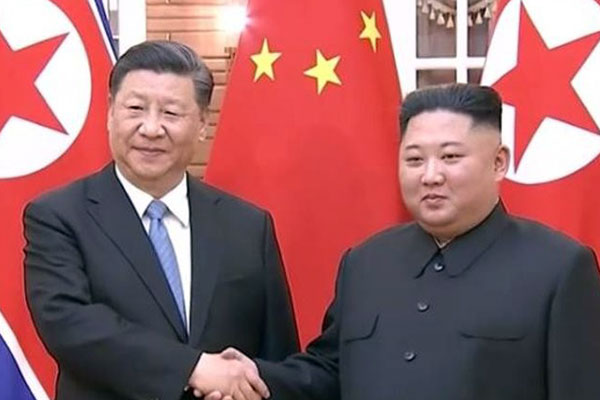 "(The leaders) assessed that it would be in line with the mutual interests of the two countries and conducive to developing regional peace and stability to further advance bilateral ties."

Marking the 70th anniversary of diplomatic relations between Beijing and Pyongyang, the leaders also agreed to maintain a close strategic dialogue, bolster mutual understanding and trust and increase exchanges and cooperation in various areas.

KCNA, however, didn't cite Kim’s comments on stalled nuclear negotiations with Washington, which were reported earlier by China's state broadcaster on Thursday.

According to China's CCTV, Kim said to Xi that despite a "relevant country's" lack of reciprocity to Pyongyang's efforts to ease tensions, he will “maintain patience" with hopes that the two sides can work together to resolve issues on the peninsula.

Kim's remarks are likely a veiled reference to the United States.

Xi, for his part, vowed to take an active and constructive role in achieving denuclearization, and expressed support for Pyongyang in addressing security and development issues.

The Xi-Kim summit comes a week before Xi is scheduled to meet U.S. President Donald Trump on the sidelines of the G20 forum in Osaka.

There is speculation that the Chinese leader may attempt to leverage influence with North Korea as a bargaining chip in trade negotiations with the U.S.