Tensions heighten between the two Koreas 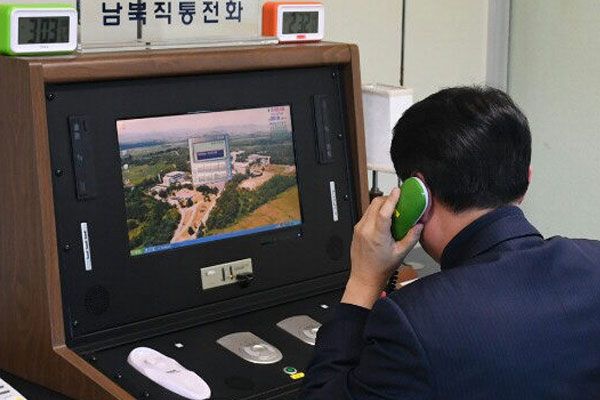 "How can the South Korean government say it will block the basic right of free speech guaranteed under the Constitution? That is a very wrong, unconstitutional idea. Our leaflets do not contain poison or bombs. They are only letters filled with the facts and truths of defectors for some 20 million North Koreans. They are just letters of facts and truth for the 20 million North Korean people who have lost their eyes and ears to the tyranny of the leader -- those who have no rights and are not aware of how the digital society of the 21st century works."

The two defector organizations, each run by Park and his brother who escaped from North Korea, also attempted to send rice in plastic bottles to the North by sea, but were thwarted by residents of South Korean border areas.

In the fall of 2014, North Korea fired air defense machine guns at balloons carrying leaflets across the border, leading to a brief exchange of fire between the two Koreas across the demilitarized zone.

North Korea’s war of words continued on Friday, when it vowed to continue its military buildup to fend off U.S. threats on the second anniversary of their leaders' historic first meeting in Singapore.

Mark Wilson-Choi has the details.

North Korea will continue to build up its military force in order to cope with threats from the United States.

That's the message Pyongyang's top diplomat sent to the U.S. on the occasion of the second anniversary of North Korean leader Kim Jong-un and U.S. President Donald Trump's meeting in Singapore.

In a statement carried by the North’s official Korean Central News Agency on Friday, North Korean Foreign Minister Ri Son-gwon said the strategic goal of his country is to build up a more "reliable force" to cope with the long-term military threat from the U.S.

Ri said hope for improved relations with the U.S. has now shifted into despair and that the North sees little use in maintaining a personal relationship between Kim and Trump.

He added that North Korea will "never again" provide the U.S. with "another package" that President Trump could use to boast as his achievement.

The anniversary of the summit comes amid heightened tensions between the two Koreas after the North cut off all inter-Korean communication lines over anti-Pyongyang leaflets sent by defectors into the country from the South.

Meanwhile, the U.S. State Department said on Thursday that the United States is willing to take a “flexible approach” to implementing the Singapore Summit agreement.

A spokesperson said the U.S. was disappointed by the North's recent actions and urged the regime to return to diplomacy and cooperation, adding Washington remains in close cooperation with its ally, South Korea, on efforts to engage the North.

Seoul's Unification Ministry declined to comment on Ri's statement, but said South Korea will continue to make efforts toward the peace and prosperity of the Korean Peninsula.