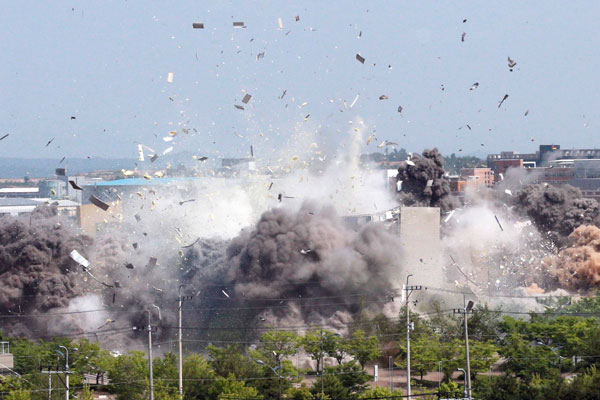 "The North-South joint liaison office has been completely destroyed."

North Korea on Tuesday destroyed the inter-Korean liaison office located in the Gaesong industrial complex in the North.

The state-run Korean Central Television in Pyongyang on the following day carried video footage of the explosive demolition of the four story building, blaming the anti-Pyongyang leaflet campaigns by defectors in the South and the South Korean government for failing to stop them.

"The North-South joint liaison office was completely demolished on June 16. To accord with public outrage calling for the thorough punishment of [human] trash and those with whom they connived, the relevant section of our side implemented the complete destruction the liaison office at the Gaesong industrial complex after severing all inter-Korean communication lines. At 14:50 on June 16th, the North-South joint liaison office was miserably demolished with a loud explosion. This is the end of the news."

The communication facility had been occupied by officials from the two Koreas after the first summit between President Moon Jae-in and North Korean leader Kim Jong-un at the truce village of Panmunjeom in April 2018. However, in a quarantine effort against the COVID-19 pandemic, the two Koreas agreed to suspend the operation of the liaison office on January 30th.

The demolition came after North Korean leader Kim Jong-un's sister Yo-jong warned that the South will witness the destruction of the inter-Korean liaison office, and that the next move will be up to the Korean People's Army.

The General Staff of the Korean People's Army issued a statement on Wednesday, saying that it will redeploy troops and firepower to eastern coastal Mount Geumgang and western border city of Gaeseong areas, and it will also resume all kinds of drills near the border.

While scrapping a 2018 peace agreement with the South Korean military, the North also said artillery units in the western sea border will reinforce its combat readiness to the top level, apparently targeting leaflet activities of North Korean defectors in the South.

Earlier this month, North Korea cut off all inter-Korean communication lines in the first phase of retaliatory action against the South for failing to prevent the defectors from sending hot air balloons carrying the anti-Pyongyang leaflets.