S. Korea and US Vow to Seek Resumption in Dialogue with N.Korea 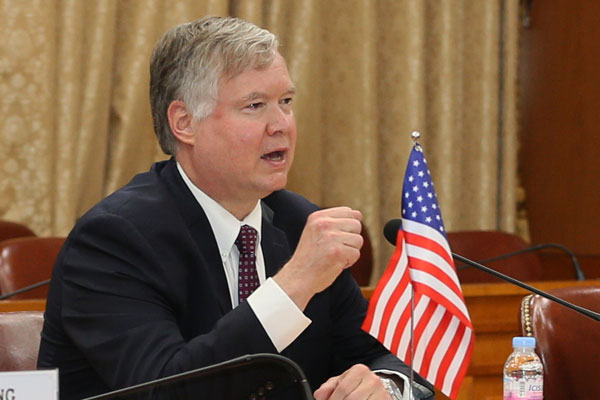 Following a temporary lull in North Korea's bellicose rhetoric, the top nuclear envoys of South Korea and the U.S. met in Seoul Wednesday and agreed to resume efforts to get Pyongyang to discuss the scrapping of its nuclear weapons.

Lee Do-hoon, special representative for Korean Peninsula peace and security affairs, and his U.S. counterpart, Deputy Secretary of State Stephen Biegun, held talks at the Foreign Ministry in Seoul and briefed reporters after their meeting.

"I stressed [in our meeting] that dialogue and negotiations are the only ways to resolve this problem and that [South] Korea and the U.S. must focus all of our efforts in resuming dialogue."

"Representative Biegun reaffirmed the U.S.' flexible stance in achieving a balanced agreement and pledged to continue efforts to make that possible."

"The United States strongly supports inter-Korean cooperation, and we believe this plays an important component in creating a more stable environment on the Korean Peninsula."

"We look forward to fully supporting the government of Korea as it advances its goals with North Korea in inter-Korean cooperation."

Lee said he held "in-depth" discussions with Biegun over ways to break the impasse in talks with North Korea as soon as possible.

Biegun said the U.S. government believes cross-border cooperation between the two Koreas plays an important role in creating a more stable environment on the Korean Peninsula.

Regarding North Korea's rejection Tuesday of any prospects of a meeting with the U.S. nuclear envoy in the border truce village of Panmunjeom, Biegun made it clear that his government did not request a meeting with the North this time.

But the U.S. envoy said the U.S. is ready to resume negotiations with the North at any time.

In a timely arranged interview with U.S. media outlet Gray TV released during Biegun's visit to Seoul, President Donald Trump said he would have another summit with North Korean leader Kim Jong-un if he thought it would be helpful. Trump then extolled his close relationship with Kim.

Biegun arrived in South Korea on Tuesday for a three-day visit amid heightened tensions caused by Pyongyang's recent demolition of an inter-Korean liaison office and threats of turning Seoul into a sea of fire, angered by propaganda leaflets launched across the border by South Korean activists.