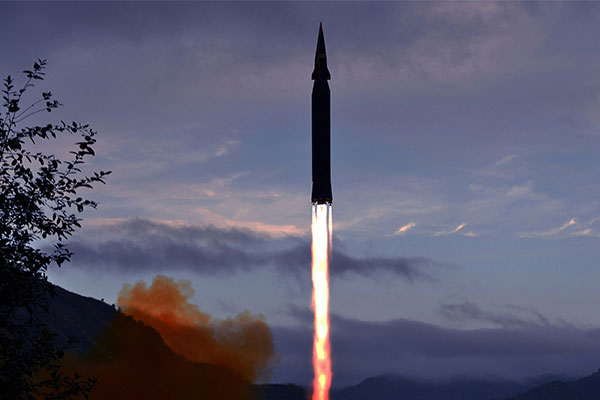 North Korea announced Wednesday that it has test-fired a newly developed hypersonic missile, confirming Tuesday’s launch of what the South Korean Joint Chiefs of Staff called an unidentified projectile into the East Sea.

According to the Korean Central News Agency(KCNA), the new hypersonic missile called the Hwasong-8 was launched from Toyang-ri, Ryongrim County in Jagang Province on Tuesday morning by the Academy of Defence Science.

Stressing that it was the first test-launch, the KCNA said it confirmed flight controllability and the safety of the missile, as well as the stability of the engine and missile fuel ampoule.

Calling the project one of five top priorities in a five-year plan for the development of defense science and weaponry, the KCNA said it had great strategic significance in enhancing the North’s defense-related science and technology and strengthened its self-defense.

The KCNA report confirmed that the missile was a hypersonic weapon that the North had pledged to develop and test early this year at the Eighth Congress of the Workers’ Party in January.

The KCNA said that the latest missile launch was overseen by Pak Jong-chon, member of the Presidium of the Politburo of the Workers' Party. North Korean leader Kim Jong-un did not attend.

In a statement, South Korea’s Joint Chiefs of Staff(JCS) said that, after analyzing the detected speed and other features, the missile appears to be at an early stage of development, which requires considerable time before actual deployment.

Should North Korea succeed in further development, however, the missile will likely become difficult to intercept as it will be capable of striking targets from longer ranges within a shorter period of time.

Japan’s Foreign Ministry said on Thursday that top nuclear envoys of South Korea, the United States and Japan have jointly expressed concerns about a recent spate of missile launches by North Korea.

During the meeting, the ministry said, the three officials exchanged opinions on the North Korean situation, focused on its recent nuclear and missile activities and shared concerns about the moves.

They agreed to continue close, trilateral cooperation for complete denuclearization of North Korea.

The result of the tripartite talks was announced as Noh and Kim held a bilateral, in-person meeting in Indonesia on Thursday to discuss issues related with the North.

The UN Security Council held an emergency meeting Friday on North Korea's recent missile tests, but failed to agree on a joint statement.

Citing diplomats, AFP news agency said the closed door meeting lasted just over an hour but Russia and China said this was not the time for a public statement and that they needed more time to analyse the situation.

The meeting was requested by the U.S., Britain and France following North Korea's statement earlier this week that it tested a new hypersonic glide missile.

The meeting originally scheduled for Thursday was delayed to Friday as Russia and China asked for more time to examine the situation.