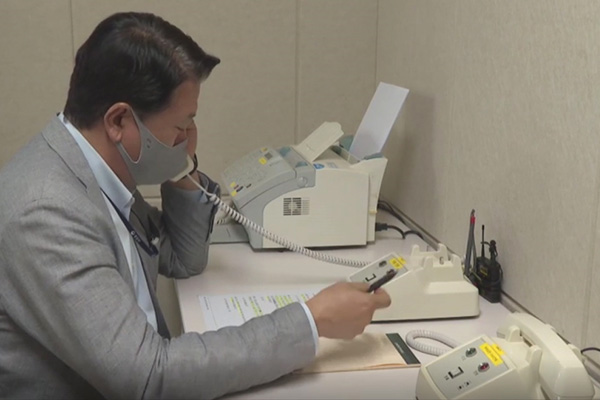 Direct communication lines linking South and North Korea have been restored, about two months after Pyongyang stopped taking the daily calls in protest of an annual combined military exercise between South Korea and the United States.

The Seoul government said on Monday the lines were back to normal operations as of 9 a.m., 55 days after the suspension. Calls were confirmed at the joint liaison office as well as two military hotlines along the western and eastern coasts.

Seoul's Unification Ministry in a statement expressed its hope that the restored communication channels "laid the groundwork for bringing the relations between the two Koreas back on track."

The ministry also noted that, while both of the direct military communication lines operated normally, Pyongyang has yet to answer South Korea's ship-to-ship calls that use an international network for merchant vessels.

In advance of the scheduled calls, North Korea's official Korean Central News Agency reported the planned resumption, adding South Korea "should make positive efforts to put the North-South ties on a right track and settle the important tasks, bearing deep in mind the meaning of the restoration of communication lines."

The minister, who is visiting Germany to mark the 31st anniversary of German reunification, gave the assessment to Yonhap News on Monday in Berlin.

Regarding possible high-level inter-Korean talks this year, Lee said that the government will have to pursue such talks by doing things in order. First is building a video conference system, conducting test calls and then holding new talks on the items that the South has come up with.

On Saturday, the minister said that he would work to realize high-level talks with the North within this year. He said that it would be great if the two Koreas reach an agreement for dialogue and cooperation and work together toward the Beijing Olympics.

Despite the restored communication lines, North Korea's propaganda outlet is ramping up pressure on South Korea to change its "confrontational" approach and attitude towards the regime.

The North's Meari website on Wednesday delivered a statement from a research institute under the United Front Department, saying the two Koreas' impasse will continue unless South Korea moves words into action.

Calling Seoul's military exercise with Washington, military reinforcement and provocative statements against Pyongyang a "source for distrust and confrontation," the institute accused the South of lacking genuine will to improve inter-Korean ties.

The latest call echoes what North Korean leader Kim Jong-un said at the regime's rubber-stamp parliament last week, where he stressed that Seoul should rid itself of its confrontational attitude and display a will to improve ties through action.