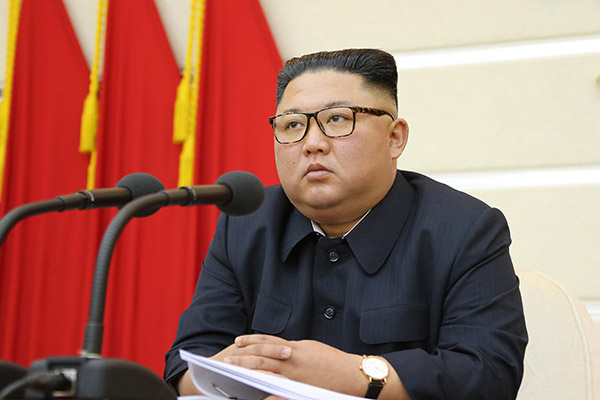 North Korean leader Kim Jong-un is focusing on diplomacy with China. On May 7, Kim sent a verbal message to Chinese President Xi Jinping to congratulate China for successfully containing the spread of COVID-19. The message came at a time when both North Korea and China were preparing to normalize their respective economies after gaining control over the virus situation to some extent. Here is political commentator Kim Hong-guk with more.

In the message, the North Korean leader highly appreciated that the Chinese president led the party and the people to seize a chance of victory in the war against the unprecedented epidemic. Kim also praised Xi for managing the overall situation in a strategic way. He expressed his commitment to improving ties with China, highlighting the value of the bilateral alliance.

In related news, Chinese public officials have recently checked anti-virus efforts in Dandong in China’s northeastern province of Liaoning, a region bordering North Korea. Apparently, the two countries are discussing quarantine cooperation, which could lead to bilateral economic cooperation. This is what North Korea badly needs. Attention is drawn to whether the two sides will agree on some policies and cement their friendship further.

At the key party conference late last year, Kim Jong-un pledged to make a frontal breakthrough to tackle international sanctions and to build a self-reliant economy. Upon the unexpected outbreak of COVID-19 in China, however, North Korea had to shut down its border with China quickly. The border closure has taken a heavy toll on the North Korean economy, which depends almost entirely on trade with China.

North Korea is in a very difficult situation. It has sealed off its border with China since late January. China accounts for 95 percent of North Korea’s total trade. It is easy to imagine that North Korea’s economic difficulties have become even more severe. According to the National Intelligence Service’s report to the parliamentary intelligence committee on May 6, trade volume between North Korea and China fell 55 percent in the first quarter, year-on-year, and plunged 91 percent in March alone. It seems commercial activities in North Korea have shrunken as fewer markets remain open, with Pyongyang citizens hoarding daily necessities. Needless to say, North Korea is in desperate need of help from China. In this situation, it remains to be seen how their relations may evolve.

At this point in time, the top priority in Kim Jong-un’s state management is to improve public livelihoods and achieve economic growth independently. Kim visited a fertilizer plant in Sunchon earlier this month in his first public activity following his 20-day absence from public view. At the time, the leader cut the ribbon at the ceremony marking the completion of the plant. Of course, the factory should be equipped with the necessary production facilities before it starts operation. But many analysts point out that North Korea is not capable enough to do so. There are many other economic projects piled up that the nation needs to work on this year. That is why North Korea needs help from China, now more than ever before.

Amid the drawn-out border shutdown, public discontent and criticism have been escalating in North Korea. The Kim Jong-un regime absolutely needs cooperation with China to govern the nation in a more stable way and strengthen internal unity. The leader ordered his officials to complete the construction of a general hospital in Pyongyang. It is set to be constructed by the 75th anniversary of the foundation of the Workers’ Party on October 10. But it is extremely difficult for the North to fulfill that goal without assistance from China, because of inadequate construction materials and medical equipment. On its own, North Korea will also find it challenging to prepare for production facilities for the phosphatic fertilizer factory in Sunchon. To find an economic breakthrough, Pyongyang is reaching out to Beijing for help.

In response to Kim Jong-un’s message, Chinese President Xi Jinping also sent a verbal message to Kim on May 8 to demonstrate a close relationship between the two communist allies.

Xi expressed his willingness to cooperate with North Korea in the fight against COVID-19. In the message, the Chinese president promised to do everything in China’s power to help North Korea contain the virus. He said he was greatly interested in the health conditions of North Korean people and he was glad to see the positive results of Pyongyang’s anti-epidemic measures. Noting that Xi considered relations between the two countries very important, he said he hoped to propel the steady development of bilateral ties in the new era. Xi added he wished to actively contribute to regional peace, stability, development and prosperity by strengthening strategic communications and promoting exchange and cooperation between the two countries. The exchange of messages between Kim and Xi shows that the two countries are becoming increasingly interdependent.

Regarding the Chinese president’s swift reply to the North Korean leader’s message, some analysts say that China is trying to secure a faithful ally in a continued battle against the U.S. for global hegemony. U.S. President Donald Trump and high officials in the U.S. administration have recently claimed that the COVID-19 pandemic originated in a lab in Wuhan, blaming China for the outbreak.

About one-third of confirmed cases of COVID-19 worldwide are found in the U.S., and it is saying that China is the cause the global pandemic. China, for its part, shifts the responsibility onto the U.S. amid the top world powers’ blame game, China uses North Korea in a strategic move to justify its position and effectively confront the U.S. In other words, it seeks to drive a wedge between North Korea and the U.S. and exert greater influence over the North. So, in addition to quarantine cooperation and friendship with North Korea, China also has a political purpose of securing an ally, namely, North Korea, to reinforce a front against the U.S.

Meanwhile, Kim Jong-un sent a message to Russian President Vladimir Putin on May 9 on the occasion of the 75th anniversary of the Soviet Union’s victory in World War II.

While North Korea is sending a friendly message to China and Russia that have provided economic aid to the North, it seems to be urging South Korea to make more efforts to help break the deadlock in North Korea-U.S. relations.

However, both China and Russia find it hard to support North Korea for now, even though North Korea continues to struggle with economic difficulties. So, when the time is right, North Korea could make a strategic decision to mend ties with South Korea. Therefore, Seoul should not be too optimistic or pessimistic in each situation. North Korea is extremely reluctant to change its attitude. In consideration of this, South Korea needs to have patience and perceive inter-Korean cooperation from a longer perspective. Then, the doors to cross-border dialogue and cooperation will open eventually.

To resolve the urgent problem of economic difficulties, North Korea is likely to focus more on its ties with China, putting its relations with the U.S. on the back burner for the time being. Also, any meaningful improvement in inter-Korean relations will likely be made in line with progress in nuclear negotiations between North Korea and the U.S. and the possible, subsequent easing of sanctions on North Korea.