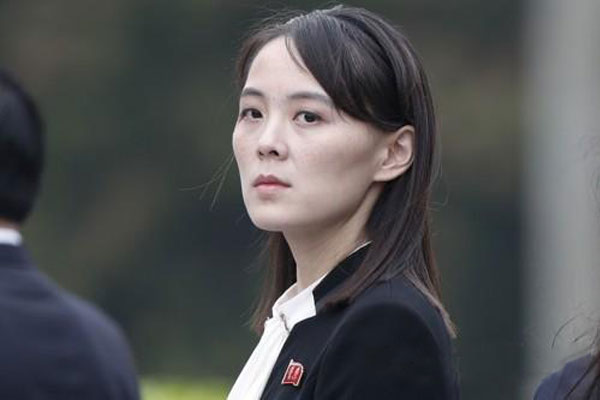 Kim Yo-jong, the younger sister of North Korean leader Kim Jong-un and vice department director of the ruling Workers’ Party, strongly denounced the combined military exercises between South Korea and the U.S. in her statement on August 10. In the last part of the statement, she said that it was issued “upon authorization,” indicating that North Korea’s top leader authorized the release of the statement.

Analysts say that Kim Yo-jong’s statements, which have been announced since last year, show her reinforced power and status in the country. Let’s hear from Hong Min, researcher from the North Korean Research Division at the Korea Institute for National Unification.

It is known that former North Korean leader Kim Jong-il had three sons and four daughters. Among them, two sons and one daughter, who include current leader Kim Jong-un and Kim Yo-jong, were born to Ko Yong-hui (고영희). As the leader’s de facto closest aide, Kim Yo-jong plays a pivotal role in the party and holds an unrivaled position in the country’s revolutionary tradition as she shares the so-called “Baekdu bloodline” of the ruling Kim family.

Her official title is the vice director of the Propaganda and Agitation Department of the Workers’ Party. Her position may not be the highest, but she takes care of everything involving the top leader, while devising and managing action plans overall. Regardless of the title, she exercises more power than anyone else in the party.

Kim Yo-jong appeared in front of the public for the first time during the funeral of her father and former leader Kim Jong-il in December 2011. Afterwards, she was seen in various sites where leader Kim Jong-un conducted field inspections. She was first elected a member of the Supreme People’s Assembly in 2014.

During North Korea’s parliamentary election in 2014, Kim Yo-jong accompanied her brother, along with his other close confidants, generating speculation that she held a high status. In December the previous year, Kim Jong-un executed his powerful uncle Jang Song-thaek(장성택) in his biggest political purge. Jang had close connections with China and wielded great influence over the party and the military. Kim Jong-un had to get rid of Jang in order to seize power and govern the country with confidence.

In the process of eliminating the potential rival, Kim needed a person he could trust. The person turned out to be his sister Kim Yo-jong, just as his father Kim Jong-il united with his own sister Kim Kyong-hui(김경희). I think Kim Yo-jong played a crucial role in strengthening her brother’s position within the party. Kim Jong-un regarded his sister as the most trustworthy person in the process of taking power.

Kim Yo-jong became a member of the Central Committee of the Workers’ Party in May 2016. She began to become involved in North Korea’s foreign policy after she was put on the list of alternate members of the party’s political bureau in October 2017.

South Koreans became familiar with Kim Yo-jong around the 2018 PyeongChang Winter Olympics. At the time, she led a high-level North Korean delegation to set foot on South Korean soil for the first time. When she visited the presidential office in Seoul, she introduced herself as Kim Jong-un’s special envoy and delivered the North Korean leader’s letter to South Korean President Moon Jae-in. Afterwards, she accompanied her brother at inter-Korean summits, North Korea-U.S. summits and North Korea-China summits to demonstrate her presence in the diplomatic arena.

Kim Yo-jong participated in the process of materializing summit talks between Kim Jong-un and former U.S. President Donald Trump. From the North Korean side, she effectively coordinated their first summit in Singapore. She also attended inter-Korean summits and North Korea-China summits. That is, she was present at high-profile summit meetings involving the North Korean leader. Not just playing the role of sending North Korea’s message to the outside world, she has influenced her brother’s decision-making when formulating policies. No doubt, she is the most attention-grabbing figure in terms of North Korea’s overseas policy.

In March 2020, the South Korean government expressed regret and concerns over North Korea’s firepower strike drill. In response, Kim Yo-jong announced the first statement under her name. She has since released statements, followed by supporting statements by key North Korean officials. This proves her influential status in the country.

Before the North Korea-U.S. summit in Hanoi in 2019, North Korea’s messages were mostly announced by Kim Yong-chol, a former hard-line military general who acted as a special envoy for North Korea-U.S. negotiations, the General Political Bureau of the Korean People’s Army or the General Staff Department of the army. No matter how high their status was, their authority was strictly limited. So their statements were not very effective or weighty.

After the failed summit in Hanoi, North Korea probably felt the need to send stronger messages to the U.S.  Then, Kim Yo-jong emerged as an official in charge of overseeing inter-Korean relations. Her statement directed at South Korea drew great attention quickly, since it was believed to reflect Kim Jong-un’s intention. She didn’t seem to care about diplomatic courtesy but made blunt, straightforward remarks. The unconventional, strongly-worded message made the statement more aggressive and belligerent.

Some say that Kim Yo-jong’s statements are excessively aggressive. They say that her principled, hard-line stance leaves South Korea or the U.S. less choice, while others believe that she plays the role of “bad cop,” acting separately from her brother.

In June, the French daily Le Monde said that Kim Yo-jong left a distinct impression on the diplomatic stage at the opening ceremony of the 2018 PyeongChang Olympics, but she has now come forward as Kim Jong-un’s spokesperson making biting remarks. With Kim Yo-jong’s status rising fast, some analysts say that she is among the most likely to succeed the North Korean leader.

It is not easy to become the heir apparent of the North Korean regime, as an heir apparent should undergo a rigorous process of securing a solid position in the party and justify that process. Kim Yo-jong seems to be powerful now, but it is unclear whether she will be able to produce some visible outcome. Also, the current leader in his late 30s may rule the country in the next 20 to 30 years, or even longer, unless he has serious health problems. It would be undesirable to decide on the regime’s next leader too early. In this respect, it is not appropriate to regard Kim Yo-jong as the current leader’s successor. Moreover, it is uncertain if she can secure her status as an heir apparent in the male-centered North Korean culture and governing structure.

Still, she will likely continue to play a role of the country’s spokesperson. While Kim Jong-un makes diplomatic remarks as a leader, his sister will deliver her brother’s messages through harsh and strident rhetoric. With the two dividing their respective roles, it is possible that Kim Yo-jong’s status will rise further.

Kim Yo-jong has announced statements on important occasions in North Korea to show off her political status both inside and outside the country. Attention turns to her next move, as she is likely to play an even greater role.