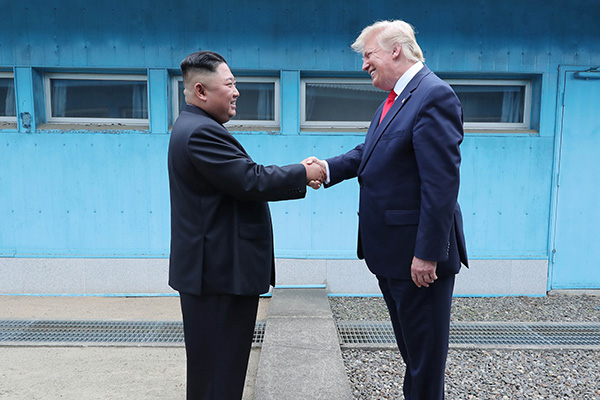 On June 30th, U.S. President Donald Trump held a surprise meeting with North Korean leader Kim Jong-un at the inter-Korean border village of Panmunjom. After a symbolic handshake between the two men in the Demilitarized Zone separating the two Koreas, Trump briefly stepped over the border into the North and then crossed back into the South with Kim.

Trump and Kim walked toward the Freedom House, a building on the southern side of Panmunjom, and South Korean President Moon Jae-in greeted them. It marked the first time in 66 years since the 1953 Armistice Agreement that the leaders of the two Koreas and the U.S. had gathered together. The historic Panmunjom encounter is expected to mark a turning point in diplomacy surrounding the Korean Peninsula. With more, here’s Professor Kim Hyun-wook from the Korea National Diplomatic Academy.

The meeting between the leaders of North Korea and the U.S. at the DMZ was indeed a historic event and a very positive development. Trump sent a tweet on June 29th proposing a meeting at the border, and North Korea responded positively to it. So the hurriedly arranged meeting didn’t really touch on particular agenda items like denuclearization but instead demonstrated the friendship and trust between Kim and Trump. I’d say their relationship will help their nations ease hostilities against each other. Of course, it is hard to expect a dramatic turnaround or outcome in their relations for now. But the possibility of an extremely strained relationship has at least now been lowered, boding well for future negotiations involving the two Koreas and the U.S.

Moon said on Tuesday that the Panmunjom meeting signaled the beginning of a new era of peace. The South Korean president added that although there was no signature on a document, the three leaders, in effect, declared an end to hostilities with their actions. There are high expectations that the de facto third meeting between Kim and Trump will pave the way for the complete denuclearization of the Korean Peninsula and the establishment of lasting peace in the region. Of course, the DMZ meeting was welcomed by the South Korean government, which has tried hard to resume North Korea- U.S. dialogue.

There were concerns and criticism that South Korea was losing ground on the diplomatic stage as it couldn’t play a mediating role properly, especially after Chinese President Xi Jinping visited Pyongyang last month and promised to provide security and economic assistance to North Korea.

But I think the Seoul government’s consistent, behind-the-scenes diplomatic efforts indirectly facilitated the recent three-way meeting between the two Koreas and the U.S. The meeting provided important momentum for South Korea to continue to act as a mediator. In this sense, the meeting was a very positive and encouraging result for Seoul.

The symbolic DMZ meeting between Kim and Trump is believed to have reactivated the denuclearization process, which had been stalled since the collapse of the second U.S.- North Korea summit in Hanoi in February. As the two leaders have agreed on the resumption of working-level talks on denuclearization, attention now turns to what negotiation cards the two countries will play.

Basically, the U.S. insists that Pyongyang and Washington must first agree on a comprehensive road map calling for North Korea’s complete denuclearization, followed by the subsequent settlement of peace, sanctions relief and a security guarantee for the communist regime. The U.S. maintains that it is possible to strike a small deal to implement relevant measures step by step, but only after the big deal is made.

Some analysts speculate that North Korea has shifted its focus to the security guarantee issue in the belief that the U.S. won’t accept its demand for sanctions exemptions. The North may also have concluded that it can survive the sanctions by securing economic aid from China or Russia and that it is time to demand a security assurance from the U.S. instead. Whatever the reasons, North Korea is expected to attempt to find a breakthrough in future negotiations.

The U.S. will probably focus on designing a road map in line with a “comprehensive deal” mentioned by Trump after his Panmunjom meeting with Kim. Some predict that the U.S. may consider a transitional freeze of North Korea’s nuclear activities, rather than the compete dismantlement of its nuclear programs. That is, Washington may take a gradual approach by shutting down North Korea’s nuclear facilities first, to prevent the nation from producing additional nuclear material, and then ease sanctions against Pyongyang in return.

A change is also being perceived in North Korea’s strategy. During his summit with Russian President Vladimir Putin, Kim Jong-un said that the key is to secure a security guarantee for his regime. Pyongyang is likely to use this issue as a new negotiation card.

Newly arranged nuclear negotiation teams from North Korea and the U.S. may sit face to face for working-level talks as early as mid-July, after a five-month hiatus.

It appears that Trump wants to strike some sort of deal to handle North Korea-related issues more effectively and move on to hold another summit with Kim. We have to see what chief U.S. nuclear negotiator Stephen Biegun will propose as a negotiation card. If North Korea has really demanded a security guarantee instead of sanctions relief, and if the two sides manage to fine-tune details about their respective proposals, they could reach an agreement earlier than expected.

At the prospective working-level negotiations, the key is whether the two sides can narrow their differences over the method of denuclearization. The U.S. prefers a one-shot, big deal, while North Korea is advocating for a phased or salami-slicing approach. Attention now swings to whether the two sides will find common ground and how they address Pyongyang’s demand for a security assurance and Washington’s flexible approach to denuclearization at their working-level talks. The result of the negotiations will likely determine what shape and form regional diplomacy may take down the road.

As a favorable mood is being created for North Korea- U.S. dialogue, analysts are raising the possibility of a fourth inter-Korean summit between Moon and Kim.

A fourth inter-Korean summit will be possible only after working-level talks between North Korea and the U.S. are conducted. Pyongyang and Washington might agree on the normalization of major inter-Korean economic projects such as the Mt. Geumgang tour program and the Gaeseong Industrial Park at their working-level negotiations. The agreement will pave the way for the leaders of the two Koreas to meet again to discuss cross-border cooperation issues in more detail. So, depending on the result of the North Korea- U.S. working-level talks, the possibility of another inter-Korean summit will be discussed.

There is hope that the historic DMZ meeting between the leaders of North Korea and the U.S. will jump start the stalled denuclearization talks and help produce positive results at future negotiations.