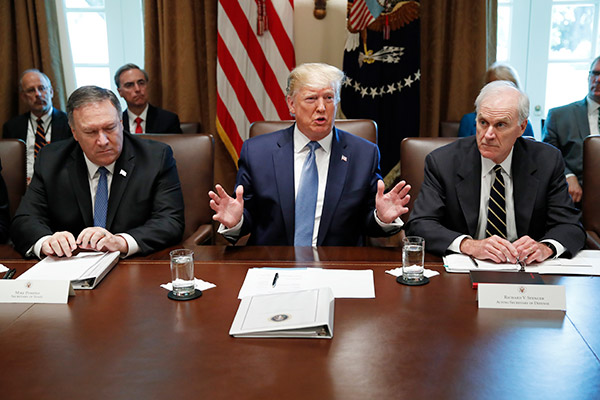 North Korea and the U.S. have announced their respective messages about possible working-level denuclearization negotiations, which their leaders agreed to hold during their meeting in the inter-Korean border village of Panmunjom last month.

North Korea revealed its intention on Tuesday to link its participation in working-level talks with the U.S. with the planned South Korea-U.S. combined military exercise. Despite the threat, U.S. President Donald Trump has hinted that there might be a change in sanctions against the North depending on progress in denuclearization talks.

Here is Park Won-gon, an international studies professor at Handong Global University, to discuss the prospects for the resumption of working-level talks between the North and the U.S.

After their brief encounter in Panmunjom on June 30, Trump and North Korean leader Kim Jong-un agreed on the reopening of working-level negotiations between their countries in the next two to three weeks. The following day, the North Korean media, including the main newspaper Rodong Sinmun, expressed the nation’s commitment to working-level talks with the U.S. It’s been nearly three weeks since then, so analysts expected the negotiations to take place sometime this week. But North Korea has remained silent so far.

In the meantime, Pyongyang is stepping up its pressure on Washington, taking issue with the South Korea-U.S. combined military exercise.

A spokesman of North Korea’s Foreign Ministry said in a statement on Tuesday that the resumption of working-level nuclear talks with the U.S. would be affected if the U.S. pushes ahead with the joint military exercise with South Korea scheduled for August.

The statement can also be viewed as a negotiation tactic of Pyongyang’s. The North Korean Foreign Ministry made the statement on July 16th, and it is well aware that South Korea and the U.S. cannot cancel their August military exercise this late in the game. By insisting on conditions that are difficult for South Korea and the U.S. to accept, the North might be attempting to gain the upper hand in future negotiations.

North Korea has brought up the issue of the South Korea-U.S. military exercise for two possible reasons. First, it might be looking for a convenient way to avoid working-level talks with the U.S. Second, it wants to show its determination not to be swayed by the U.S. in negotiations.

As a matter of fact, North Korea has mentioned the joint military drills between South Korea and the U.S. whenever major nuclear negotiations lay ahead. Denouncing the drills as a threat to the North Korean regime, Pyongyang has strategically used the issue as leverage in negotiations. The agreed-upon working-level talks, in particular, are expected to touch on the issue of a security guarantee for North Korea. Having this possibility in mind, North Korea might be preparing to gain ground on the U.S. at the negotiations.

But the two countries are likely to hold a working-level meeting itself, even though it may come one or two weeks later than expected, as it was agreed upon by their leaders.

I don’t think North Korea will reject the working-level negotiations with the U.S. altogether. We already know who the two sides negotiators would be. The U.S. delegation will be led by U.S. Special Representative for North Korea Stephen Biegun, while it appears that Kim Myong-gil, a former North Korean ambassador to Vietnam, has been named the new nuclear envoy. Sources in the U.S. say that Pyongyang, Panmunjom and Sweden are being considered as the meeting venue. It seems that the U.S. is ready to go anywhere as long as North Korea decides on the location. Given the North Korean Foreign Ministry’s statement on Tuesday, however, I think it will take some more time for North Korea to make a decision. But it will be hard to hold working-level talks in August, when South Korea and the U.S. are expected to start their joint military exercise. I guess North Korea should decide on the working-level talks with the U.S. within this month, either this week or next week.

In the run-up to the possible working-level talks, the U.S. is sending positive and forward-looking messages. U.S. Secretary of State Mike Pompeo has said that security assurances sought by North Korea must be put in place and that achieving North Korea’s denuclearization in a way that the U.S. can verify would be a truly historic accomplishment. The State Department has also said that a nuclear freeze would be the beginning of complete denuclearization. When it comes to North Korea-related issues, President Trump has also said that time is not of the essence but good things will ultimately happen.

Trump has been consistent with what he said about North Korea’s denuclearization. He says he’s in no rush and he wants North Korea’s complete denuclearization. During the second North Korea-U.S. summit in Hanoi, Washington proposed a one-shot deal. But it seems the U.S. is taking a more flexible attitude now, as it continues to mention a certain corresponding measure for North Korea, although it does not necessarily mean the lifting of economic sanctions.

According to a source close to White House deliberations on North Korea, the U.S. is considering suspending sanctions on North Korea’s coal and textile exports for 12 to 18 months in exchange for Pyongyang’s dismantlement of its main nuclear facility in Yongbyon and a freeze of its entire nuclear program. Of course, Washington is also considering the possibility that North Korea may not honor the agreement. Still, it seems the U.S. is approaching the denuclearization issue in a more flexible way than before. It has also expressed its hope to resume dialogue with North Korea and produce results, despite the North Korean Foreign Ministry’s recent provocative comments.

If the two sides manage to reconvene a working-level meeting, they will figure out whether and how the other side has changed its position on denuclearization over the last four months since their second summit collapsed in Hanoi.

The working-level talks, if realized, will start from the point of the failed Hanoi summit, where the two sides confirmed their widely differing views on denuclearization. The differences still remain. But it’s not entirely impossible for them to reach a compromise. The key is which North Korea will choose, an ideological cause or practical interests. If Pyongyang chooses the former, it will be challenging to move the negotiations forward and reach an agreement. If they choose to pursue practical benefits, however, Pyongyang could give up its current nuclear weapons program. If that happens, the U.S. and the international community may take reciprocal action. I imagine both sides have their own goals in mind.

Attention is being drawn to exactly when North Korea and the U.S. will meet for their working-level talks and what negotiation cards they will exchange at the meeting.