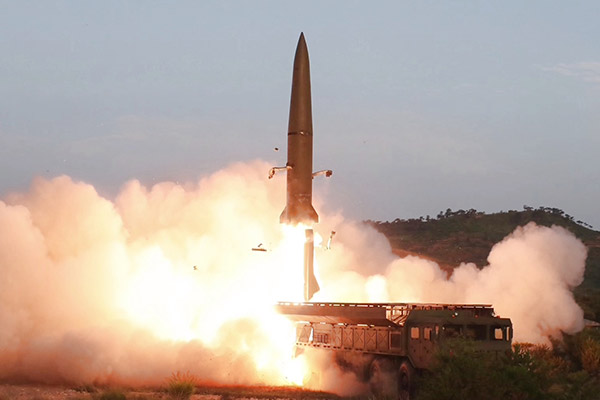 North Korea continues with its provocations. Early on Wednesday morning, the North fired two short-range projectiles off its eastern coast, six days after it launched two short-range ballistic missiles from the same area. The missiles launched last week were identified as the North Korean version of Russia’s Iskander ballistic missile. Here’s Professor Chung Dae-jin from the Institute of Unification at Ajou University to analyze the North’s recent launch.

The first projectile was fired at 5:06 a.m., and the second one at 5:27 a.m. on Wednesday from the Kalma(갈마) area near North Korea’s eastern port of Wonsan. According to South Korea’s Joint Chiefs of Staff, both flew some 250 kilometers at an altitude of 30 kilometers.

Ballistic missiles flying at altitudes of 70 to 100 kilometers are relatively easy to intercept. But ones flying at low altitudes of 30 and 50 kilometers could challenge South Korea’s current missile defense system and therefore pose a serious threat to the South’s national security. The low-altitude gliding missiles fired by North Korea last week pull up in the final downward stage of their ballistic trajectory and then dive to attack the target. Missiles using this advanced capability, known as the “pull-up” maneuver, are difficult to shoot down as they can avoid South Korea’s anti-missile system which follows the trajectory of ordinary ballistic missiles in order to intercept them. Missiles that are difficult to intercept are considered to be highly threatening.

South Korean military authorities said that the projectiles North Korea fired on Wednesday were short-range ballistic missiles. Contrary to this analysis, however, North Korea’s state media reported on Thursday that leader Kim Jong-un inspected the test-firing of a newly-developed large-caliber multiple launch rocket system. But the North did not show photos of the latest testing, in contrast to the previous ballistic missile launches, spawning speculation that it tried to deceive the intelligence authorities of South Korea and the U.S. Military authorities in the South are closely analyzing the latest firing and are assuming that the projectiles fired by the North on Wednesday were similar to the ones launched on July 25th.

South Korean Defense Minister Jeong Kyeong-doo made strong remarks about North Korea’s provocations, which was a rather rare occasion for the defense minister who is currently serving under a liberal Seoul government.

Hours after the projectile launches on early Wednesday morning, Jeong attended a forum hosted by the Korea Institute for Defense Analyses and said that North Korea should be regarded as an “enemy” if it continues to carry out provocations that threaten South Korea. It is only natural that the defense chief raised a strong voice against North Korea’s provocations and that the South needs to respond to them sternly. I’d say that the current situation is difficult and precarious.

The term “enemy” is the strongest expression the defense minister has used to describe North Korea since taking office in September of last year.   The presidential office in Seoul also convened a National Security Council meeting on Wednesday morning. It seems Seoul is responding promptly and firmly to North Korea’s successive provocations. Attention is being drawn to the reasons behind Pyongyang’s recent move, which came ahead of the ASEAN Regional Forum in Thailand this week.

Apparently, North Korea has expressed its displeasure about the South Korea-U.S. combined military exercise, known as the 19-2 Dong Maeng(동맹), which is scheduled to start on August 5th and also about South Korea’s decision to bring in F-35 stealth fighter jets.

North Korea is also engaging in a war of nerves with the U.S. ahead of possible working-level denuclearization negotiations. As it has repeated several times before, the North is urging the U.S. to present different terms for denuclearization. Pyongyang is asking the U.S. how it will deal with the security guarantee issue and whether it will continue to hold joint military drills with South Korea to enhance their combined military capabilities.

On the surface, North Korea’s recent military move is aimed at pressuring South Korea to stop its joint military exercise with the U.S. But in reality, Pyongyang has the stalled nuclear negotiations with Washington in mind.

The leaders of the two countries held a surprise meeting at the inter-Korean truce village of Panmunjom on June 30th and agreed to resume working-level denuclearization talks within a few weeks. However, since the negotiations have yet to take place, the North is deliberately stoking tension to gain the upper hand at future talks with the U.S.

Still, North Korea is adjusting the level of its provocation to keep the negotiations alive. It has fired short-range projectiles, rather than directly targeting the U.S. with an intercontinental ballistic missile or SLBM. The U.S. meanwhile, also remains cautious about the North’s recent provocations. While maintaining pressure on North Korea, Washington has refrained from provoking Pyongyang and stressed the need for dialogue.

The U.S. is likely to brush off North Korea’s short-range missile firing and focus more on managing the situation properly. While the North is expected to continue with its military provocations, underlining the importance of self-reliance and strengthening internal unity, the U.S. is bracing for a prolonged deadlock in the North Korean nuclear issue. The U.S. will respond to Pyongyang’s provocations flexibly as long as the communist regime does not cross the red line, namely, a nuclear or intercontinental ballistic missile test. But if the situation is drawn out for too long, the U.S. may change its attitude.

The U.S. State Department swiftly defined the projectiles fired by North Korea as “missiles,” saying that it will continue to monitor the situation, but the U.S. remains unchanged in its previous position that the missile launch will not be a threat to its national security.

Meanwhile, the Associated Press and Reuters reported on Tuesday that a high-ranking official from the White House National Security Council, also known as the NSC, met a North Korean official at the Demilitarized Zone separating the two Koreas last week.

The reports say that a U.S. official met a North Korean counterpart to deliver photographs of the meeting between U.S. President Donald Trump and North Korean leader Kim Jong-un at the DMZ on June 30th. Some analysts suspect that the U.S. official who visited the DMZ last week was Matthew Pottinger, the NSC senior director for Asia, or Allison Hooker, the NSC director for Korea. Whoever it was, the official didn’t travel all the way there simply to deliver photos. I imagine the two sides expressed hope to resume working-level talks quickly. If they wrote down what they wanted on a document and exchanged it, it would definitely be a positive sign for additional talks, even though a working-level meeting may not take place anytime soon.

It is difficult for now to predict what was discussed at the recent meeting between the U.S. and North Korea. Meanwhile, U.S. President Donald Trump said on Tuesday that he has a good relationship with the North Korean leader, while Secretary of State Mike Pompeo noted that he is very hopeful for the quick resumption of nuclear negotiations with the North despite Pyongyang’s recent weapons test. It remains to be seen whether a breakthrough can be found in the drawn-out stalemate in nuclear talks between the two countries.