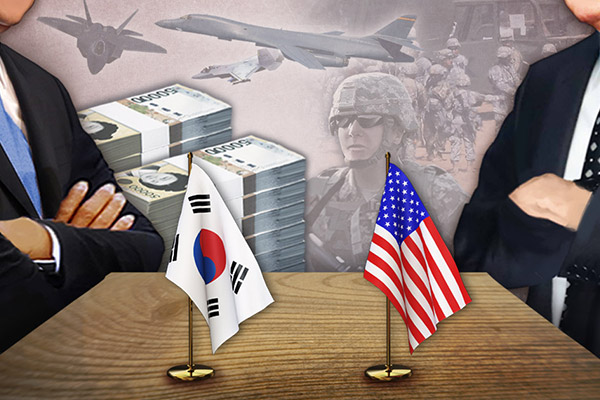 During his first visit to Seoul since assuming his post last month, new U.S. Defense Secretary Mark Esper will hold a meeting with his South Korean counterpart Jeong Kyeong-doo to discuss pending security issues. Here is Cho Sung-ryul, a researcher at the Institute for National Security Strategy, with more.

North Korea has made a series of military provocations in recent weeks in a show of force against the South Korea-U.S. combined military drills. The U.S., meanwhile, has asked dozens of nations to join a U.S.-led maritime force in the Strait of Hormuz, off the coast of Iran. The U.S. has also asked allies in Asia to deploy intermediate-range American missiles in their countries after it pulled out of the Intermediate-Range Nuclear Forces or INF Treaty with Russia last week. Seoul and Washington will hold talks to discuss how to share the cost of stationing American troops in South Korea. On another serious note, the trade conflict between South Korea and Japan is spreading to the security field. I imagine these issues will be included in the agenda for the meeting between Esper and Jeong.

Esper’s visit comes at a time when Northeast Asia is facing sensitive and complicated security challenges. The Defense Ministry in Seoul says that Esper and Jeong will evaluate security conditions on the Korean Peninsula and discuss policy coordination on denuclearization. However, the two officials are first expected to examine North Korea’s successive provocations.

North Korea and the U.S. agreed last year that the North would stop testing nuclear weapons and intermediate and long-range missiles as well as intercontinental ballistic missiles in exchange for a halt to the South Korea-U.S. joint military drills. The projectiles that North Korea test-launched in recent weeks were all short-range ballistic missiles. As a result, the U.S. does not consider the launches a breach of the agreement between their respective leaders, but the short-range missiles put South Korea within the North’s target range, posing a direct threat to the South. So this security issue should be discussed between the U.S. and South Korea.

However, it seems that Seoul and Washington are more focused on resuming denuclearization talks and securing momentum for dialogue.

It is true that North Korea’s short-range ballistic missiles and multiple rocket launchers are threatening, but in terms of policy coordination between South Korea and the U.S., the allies seem to be refraining from overreacting to Pyongyang’s moves by placing more emphasis on keeping denuclearization talks going.

Esper said on Tuesday that he would discuss North Korea-related issues with both Japan and South Korea. Prior to his South Korea trip, the secretary visited Japan on Wednesday. Regarding North Korea’s recent short-range missile launches, Esper said that it is necessary to be careful not to overreact but to open the door for dialogue. His remarks suggest that South Korea and the U.S. will continue to adopt a conciliatory approach.

Aside from issues related to the Korean Peninsula, Esper is expected to discuss the possible dispatch of South Korean troops to the Strait of Hormuz, which is emerging as an important issue in Washington’s foreign policy. Attention is also being drawn to whether the U.S. will actually deploy its ground-launched, intermediate-range missiles in Asia.

It is uncertain if the U.S. can deploy intermediate-range missiles in Asia right after its withdrawal from the INF treaty. In the case of the U.S. Terminal High Altitude Area Defense or THAAD missile defense system, Washington first installed it in its own territory of Guam and then deployed it in two locations in Japan before asking South Korea to use it as well. Although Esper has said that the U.S. is looking to deploy intermediate-range missiles in Asia, it is unclear exactly when it will do so. I don’t think this issue is a key topic for Esper and Jeong’s meeting. It might be put on the backburner of the priority list or may not even be discussed.

The Defense Ministry in Seoul said on Monday that it has not had any official discussions on this matter with Washington.

However, the news about the U.S. missile plan has already drawn strong backlash from China’s state-run media, which is saying that its ripple effects will be even more consequential than the THAAD deployment. If U.S. missiles are really deployed in South Korea, it is feared that it could trigger another dispute similar to the THAAD row.

Friday’s talks between the defense chiefs of South Korea and the U.S. are also likely to touch on the military intelligence-sharing agreement between South Korea and Japan, known as the General Security of Military Information Agreement.

The U.S. has already expressed its hope that Japan and South Korea will keep their military information-sharing agreement. But the U.S. cannot unilaterally pressure South Korea to continue it because it is an agreement between Seoul and Tokyo. In other words, South Korea and Japan should handle this matter on their own.

For the U.S., the South Korea-Japan conflict could hardly come at a worse time. That’s because cooperation between its Asian allies is more necessary than ever in order for Washington to carry out its Indo-Pacific strategy as well as diplomatic policies in East Asia. For that reason, the U.S. is urging South Korea and Japan to end their dispute and cooperate.

Esper held a meeting with Japanese Prime Minister Shinzo Abe on Wednesday. According to Japanese media, Esper requested Abe to maintain the information-sharing agreement with South Korea. It remains to be seen how Esper may respond if the South Korean defense minister hints at the possibility of scrapping the accord in response to Tokyo’s economic retaliation against Seoul.

The issue of defense cost-sharing, in which U.S. President Donald Trump has shown a particular interest, could also be on the agenda for the Esper-Jeong talks.

A report says that during his trip to Seoul last month, U.S. National Security Adviser John Bolton asked South Korea to increase its contribution for the cost of stationing U.S. troops in the country to five billion dollars, which is a five-fold increase from the current level of one billion dollars. But it’s difficult to confirm whether the report is true. At present, Seoul pays for about half of the money needed to station American troops in South Korea. Five billion dollars is two-point-five times more than the cost that is actually needed to keep the U.S. troops in the country so I think that amount is unrealistic.

Of course, Washington will ask Seoul to pay much more for the U.S. military presence in its territory. Last year, Trump wanted to raise South Korea’s share by 100 percent but Seoul managed to increase its contribution within 10 percent. The two countries will soon start negotiations to renew their cost-sharing deal.

The meeting between the defense chiefs of South Korea and the U.S. will draw keen attention, as they will gauge each other’s opinions about sensitive issues that will greatly influence bilateral relations and security conditions in Northeast Asia.