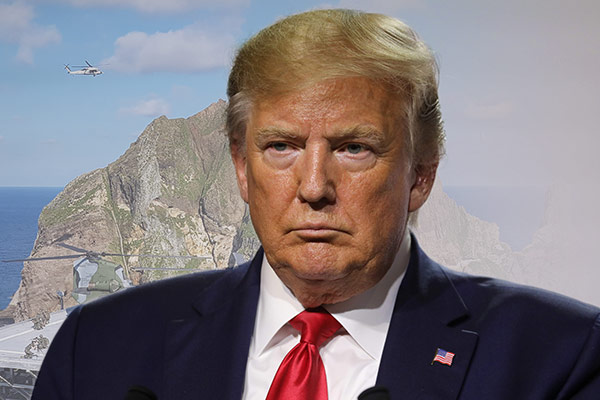 U.S. President Donald Trump has shown a negative attitude toward the South Korea-U.S. joint military exercise, calling it a “total waste of money.” However, Trump has spoken positively about North Korea and stressed that the country has tremendous potential. Here is Jin Hee-gwan, a professor of unification studies at Inje University, to analyze the American president’s mixed views on diplomacy surrounding the Korean Peninsula.

The South Korea-U.S. combined military drills are highly important in light of their military alliance. But Trump has expressed a negative view on it several times since his inauguration.

In an apparent move to express its discontent with the drawn-out standstill in dialogue with the U.S., North Korea has carried out a series of tests involving short-range ballistic missiles and multiple rocket launchers as of late. Until 2017, Pyongyang tested long or mid-range ballistic missiles that could pose a direct threat to the U.S., but they never fired a short-range missile. It seems Trump did not take Pyongyang’s recent short-range missile launches too seriously, regardless of whether they violated U.N. resolutions, since they do not really harm the U.S.

In a press conference after the first North Korea-U.S. summit in Singapore in June of last year, Trump expressed his objection to the South Korea-U.S. military drills, calling them “war games.” Even after the summit, he has consistently taken a negative stance toward the drills.

Trump used the expression, “a total waste of money,” during the Group of Seven Summit in France on August 25th. The remarks are interpreted as his intention to appease his North Korean counterpart Kim Jong-un, with the possibility of resuming North Korea-U.S. working-level talks in mind. On the same day, Trump also excused Pyongyang’s recent series of short-range ballistic missile launches as not being in violation of his agreement with Kim.

In contrast, Trump views the South Korea-U.S. military exercise from an economic perspective. Regarding South Korea’s recent decision to terminate a military intelligence-sharing deal with Japan, known as the General Security of Military Information Agreement or GSOMIA, Trump said that he would see what happens.

For Trump, GSOMIA itself may not be that important, although the Pentagon attaches great importance to the pact which is regarded as the beginning of stronger trilateral security cooperation between South Korea, Japan and the U.S.  What matters to Trump is how to lead diplomatic order in Northeast Asia through South Korea. Of course, it is also crucial for the U.S. to maintain the existing military alliance with Japan. In this context, it seems Trump gave a relatively toned-down response.

Contrary to Trump’s rather neutral stance, his administration has been voicing concern and displeasure over Seoul’s decision not to renew GSOMIA with Tokyo. The U.S. State Department said on Tuesday that South Korea’s recent military drills on its easternmost islets of Dokdo were not productive for its current dispute with Japan. Under these circumstances, some analysts suspect that the South Korea-U.S. alliance isn’t what it used to be.

For the U.S. Department of Defense, it is extremely important to carry out the strategy of encircling China and keeping Iran in check. In this sense, the Pentagon may take South Korea’s “no more GSOMIA” decision gravely. The deployment of American missiles in Asia is emerging as a hot issue after the U.S. withdrew from the Intermediate-Range Nuclear Forces Treaty with Russia. South Korea also must deal with the issue of dispatching its troops to the Strait of Hormuz to join the U.S.-led coalition in patrolling the area. The thing is, Seoul’s room for maneuver is quite limited, as far as these problems are concerned. The deployment of U.S. intermediate range missiles in South Korea, if executed, will pose a grave threat to China—probably graver than the American anti-missile system known as Terminal High Altitude Area Defense.  Their deployment would mean that South Korea will suffer from a great setback in relations with China, which is its biggest trading partner.

If the South Korea-U.S. alliance becomes weaker, Washington may put greater pressure on Seoul to pay more for stationing American troops and send its forces to the Strait of Hormuz. While the bilateral alliance with South Korea is being put to the test, Trump is also sending a conciliatory signal to North Korea.

Trump has been refraining from provoking North Korea, and I think this helps keep dialogue momentum afloat. It was surprising to hear Trump specifically mentioning North Korea’s railroads in France early this week. Although Trump has talked about North Korea’s economic potential several times, his particular interest in railroads in North Korea shows that he is well aware of cross-border issues. He seems to believe the U.S. will gain its own benefits from the railroads through economic cooperation with North Korea once the North improves its relations with the U.S. and neighboring countries as a normal state. I guess Trump has already made various future plans related to North Korea.

North Korea is greatly interested in the renovation of its outdated railroads. If North Korea-U.S. negotiations resume and move forward, railways linking the two Koreas with China and Russia could be built. It appears that Trump has hinted at the possibility of the railway project to prod Pyongyang into coming back to negotiations. The key is how flexible the two sides will be at future talks.

In a statement last week, North Korean Foreign Minister Ri Yong-ho called U.S. Secretary of State Mike Pompeo a “diehard toxin of the U.S. diplomacy.” Ri’s unusually harsh rhetoric toward the U.S. shows that North Korea-U.S. relations are in a difficult situation now. It is speculated that the two sides may be holding behind-the-scenes discussions but the talks are not going smoothly.

North Korean leader Kim Jong-un said that he would wait until the end of the year for the U.S. to come up with a new plan. If things do not proceed as he wishes, North Korea-U.S. relations may worsen even further next year. But that’s not what Trump wants, since it won’t be helpful for his reelection bid. To find a breakthrough, the two sides may hold contact behind the scenes promptly and earnestly.

If Pyongyang and Washington make meaningful progress at working-level talks, the South Korea and the U.S. will no longer confront North Korea but prepare for a nuclear free Korean Peninsula. Now that Trump has called for dialogue, it remains to be seen whether there will be a major change in North Korea-U.S. relations.