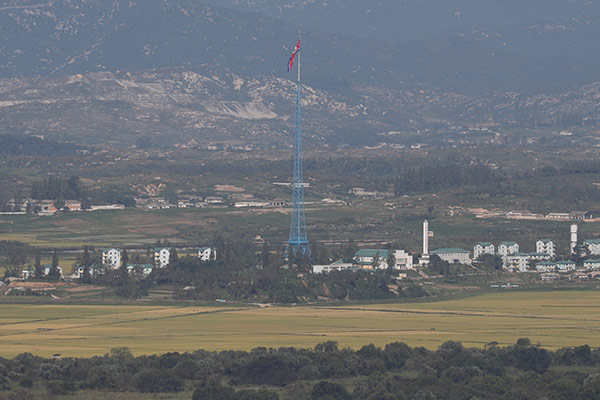 It’s been one year since South Korean President Moon Jae-in and his North Korean counterpart Kim Jong-un announced a joint declaration in Pyongyang.

On September 19th, 2018, the two leaders took each other’s hands and agreed on the complete denuclearization of the North and declared an end to hostilities across the border. Unfortunately, cross-border relations have been at a standstill this year. Still, amid growing signs of the resumption of the stalled nuclear talks between the U.S. and North Korea, attention is now turning to whether this positive mood will help break the deadlock in inter-Korean relations. Here is Jeong Young-tae, head of the Institute of North Korean Studies, with more.

The Pyongyang Declaration included not only vague principles but specific peace issues to be put into action. For instance, South and North Korea adopted a military agreement to implement the Panmunjom Declaration and agreed to promptly activate a joint military committee. The two sides also promised to hold a groundbreaking ceremony for rail and road connections across the border and normalize the Gaeseong industrial complex and the Mt. Geumgang tourism project. In addition, they agreed to resolve the issue of separated families and promote cross-border exchanges in various fields.

More importantly, the joint declaration contained the two leaders’ commitment to defusing military tensions on the Korean Peninsula and walking a new path for a peaceful coexistence and moving beyond division.

Around this time last year, the Korean Peninsula was filled with hope and expectations. During their summit on September 18th and 19th, Moon and Kim agreed to eliminate the danger of war across the entire peninsula. In other words, they pledged to remove the dark shadow of military hostilities that had been cast over the region since the 1953 armistice agreement.

The joint declaration included agreements in five areas. While some of them have been implemented, most of the others have not.

A month after the Pyongyang Declaration, Seoul and Pyongyang held high-level talks to discuss ways to cooperate in rail and road connections, forestry, health care and sports. The two sides set a schedule for additional talks in each area to implement the declaration. Some of the subcommittee meetings as well as the groundbreaking ceremony for reconnecting and modernizing railways and roads actually took place. But bilateral dialogue has been suspended since a subcommittee meeting on sports exchanges took place last December.

In line with the September 19th inter-Korean military accord that called for ending military hostilities in the air, land and sea, South and North Korea took some measures to ease tension around the Military Demarcation Line separating the two countries.

But the project to reconnect railways and roads lost steam after the groundbreaking ceremony, while there has not been any visible progress in humanitarian projects, such as the joint operation to recover war remains in the Demilitarized Zone and video reunions for separated families. With denuclearization talks between the U.S. and North Korea currently at an impasse, inter-Korean exchanges have also been in flux.

I think the breakdown of the Hanoi summit between Trump and Kim has been detrimental to the improvement of inter-Korean relations. North Korea probably had intended to lead the peace process on the Korean Peninsula as it wished. As its negotiations with the U.S. fell apart, however, Pyongyang found little traction with Seoul as well.

Some analysts say that the rather unstable Kim Jong-un regime is wary of opening its society to South Korea through bilateral exchanges, which it believes may threaten the North Korean government. The North might be stoking military tension deliberately in order to strengthen internal unity and improve relations with the U.S. in the way that it wants.

North Korea has been lukewarm about relations with the South probably because it is unhappy about its failure to lead inter-Korean ties on its own amid harsh international sanctions. Especially since the no-deal summit between North Korea and the U.S. in Hanoi in February, Pyongyang has rejected dialogue with Seoul and concentrated on the development of conventional weapons that could guarantee its security even after denuclearization. North Korea has launched short-range projectiles on more than ten occasions this year. Still, it has shown a keen interest in direct negotiations with the U.S.

I think North Korea believes it is most important to improve ties with the U.S. before resolving any regional problems. The biggest stumbling block in the way of its own development is the South Korea-U.S. alliance and the U.S. forces in South Korea, so Pyongyang’s ultimate goal is the withdrawal of U.S. troops from the South. North Korea also must focus on its relations with the U.S. to ease the ever-intensifying international sanctions. That’s why for now Pyongyang is focusing on having a better relationship with Washington.

After the collapse of the Hanoi summit, North Korea churned out hard-line rhetoric against the South, taking issue with the South Korea-U.S. combined military exercise. But Pyongyang has tried to keep the dialogue momentum with Washington afloat. The U.S., for its part, has constantly expressed its hope to hold talks with the North.

As the North Korea-U.S. working-level negotiations are showing signs of reviving, South Korean President Moon Jae-in is preparing to facilitate the talks. Moon said on Monday that South Korea would play any necessary role in moving Pyongyang-Washington dialogue forward. The South Korean president will visit the U.S. next week to attend the U.N. General Assembly and hold a summit with Trump. Attention is now being drawn to whether Moon will be able to resume his role as a mediator on the occasion of the summit.

The Moon Jae-in government believes that an improvement in North Korea-U.S. relations will lead to the advancement of inter-Korean relations. That’s why it is eager to actively promote and assist North Korea-U.S. dialogue. At the upcoming South Korea-U.S. summit, Moon is expected to stress that it is absolutely necessary to improve Pyongyang-Washington ties to ease tension and settle peace on the Korean Peninsula and in this context, their dialogue should resume as soon as possible.

The two Koreas have marked the first anniversary of the Pyongyang Declaration and both sides have since realized how long and bumpy the journey to denuclearization is. Inter-Korean relations depend heavily on the state of nuclear negotiations between North Korea and the U.S. It remains to be seen how properly and effectively the South Korean president can play his role and induce the North Korea-U.S. negotiations to produce some pragmatic results.