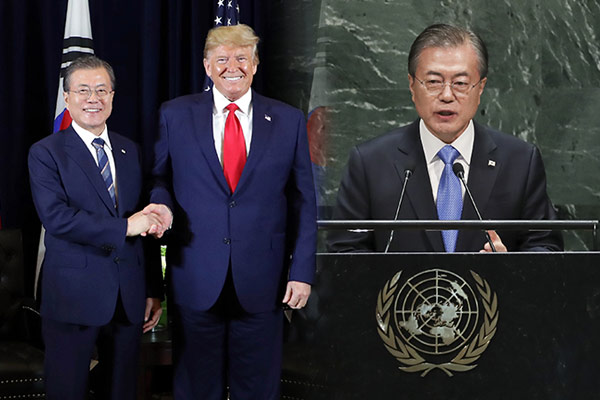 South Korean President Moon Jae-in is believed to have reactivated the process of denuclearization on the Korean Peninsula through his summit with U.S. President Donald Trump and his keynote speech at the U.N. General Assembly. Here is Hong Hyun-ik, a chief researcher at the Sejong Institute, with more.

North Korea and the U.S. have been in an intense war of nerves since their second summit in Hanoi in late February ended without any agreement. But recently, North Korea’s First Vice Foreign Minister Choe Son-hui(최선희) said that the North is willing to sit down with the U.S., while Trump removed his hawkish national security adviser John Bolton.

President Moon delivered his speech at the U.N. General Assembly session in 2017 and 2018. The prime minister, not the president, was initially expected to attend this year’s session. But as momentum was building toward the resumption of Pyongyang-Washington dialogue, the South Korean president attended the U.N. session for the third consecutive year.

The Moon-Trump summit in New York on Monday drew much attention, as it came at a time when North Korea and the U.S. were showing signs of resuming their stalled working-level denuclearization talks.

The biggest goal of the latest South Korea-U.S. summit was to strengthen the bilateral alliance and keep the Korean peace process going. It is worth mentioning that Moon and Trump agreed to accelerate that process on the basis of the Singapore summit deal signed by Trump and his North Korean counterpart Kim Jong-un on June 12th, 2018. Under the four-point agreement, the North and the U.S. committed to normalizing their relations and building a lasting peace regime on the Korean Peninsula. Pyongyang committed to working towards the complete denuclearization of the Korean Peninsula and the two countries also agreed to repatriate the remains of U.S. soldiers who fell during the Korean War. In other words, the first two points are Pyongyang’s long sought-after objectives, while the other two points reflect Washington’s position.

Trump’s mentioning of the Singapore summit agreement shows that the U.S. will accept North Korea’s demand and also make its own demand for the North, calling for “simultaneous action” by both sides.

Denuclearization was the key agenda item for the Moon-Trump summit. The two leaders positively evaluated North Korea’s commitment to restarting dialogue with the U.S. and agreed to make substantial progress in the denuclearization issue through the prompt resumption of working-level negotiations between Pyongyang and Washington. Notably, Moon and Trump reiterated that the spirit of the Singapore agreement reached at the first North Korea-U.S. summit last year is still alive. It is speculated that Washington’s attitude will be different from the Hanoi summit when holding negotiations with Pyongyang in the future.

Moon and Trump also discussed ways to cement the alliance between their countries.

Right after the summit, the White House said that the two leaders confirmed the South Korea-U.S. alliance remains the linchpin of peace and security on the Korean Peninsula and Northeast Asia.

Some say that the U.S. has been somewhat displeased with South Korea’s decision not to renew an agreement with Japan on exchanging military information. But through the Moon-Trump summit, the two countries have once again demonstrated their solid alliance. Moreover, they reaffirmed their commitment to close cooperation for North Korea-related issues and the bilateral alliance. In South Korea, the summit is believed to have dispelled domestic criticism of a possible rift in the alliance.

Based on the strong South Korea-U.S. alliance, it appears that Moon and Trump discussed working-level negotiations between Pyongyang and Washington.

It is reported that Moon and Trump discussed how North Korea-U.S. working-level talks may produce a substantial outcome. I imagine they discussed in depth the scope of North Korea’s denuclearization, Washington’s corresponding measures and the basic stance toward a security guarantee for the communist regime along with sanctions relief.

Pyongyang’s chief nuclear envoy Kim Myong-gil(김명길) has praised Trump’s recent suggestion of “a new method” in negotiations with the North as a wise political decision and expressed optimism about the two countries’ future talks. I think Trump’s adherence to the Singapore deal will motivate North Korea to come forward and actively hold negotiations. In this respect, expectations are running high for their working-level talks, which could lead to another North Korea-U.S. summit.

The summit, which lasted for 65 minutes, longer than scheduled, is expected to positively influence future negotiations between North Korea and the U.S., as it touched on ways to achieve substantial results at their working-level talks. The National Intelligence Service in Seoul said on Tuesday that working-level denuclearization talks could resume in the next two or three weeks and that depending on the result of the negotiations, a third summit between the North and the U.S. could also be held within the year.

Meanwhile, in his keynote speech at the U.N. session on Tuesday, President Moon proposed transforming the Demilitarized Zone separating the two Koreas into a global peace zone.

Moon proposed turning the DMZ into a peace zone. Under his plan, the two Koreas may eliminate nearly 400-thousand landmines in the DMZ with the help of the international community, including the U.N. Mine Action Service. Also, the U.N. offices that are already stationed in South and North Korea as well as various organizations concerned with peace, environment and disarmament could move to the DMZ.

Then, the area will be transformed into an international peace zone and a popular tourist spot.

If North Korea gives up its nuclear arsenal and possesses conventional weapons only, it may feel uneasy about its security. But the peaceful use of the DMZ, where international organizations are positioned, will provide a pragmatic guarantee to North Korea’s security. Therefore, the creation of a peace zone could be one of the factors to induce the North to abandon its nuclear weapons.

The security assurance is actually one of the key issues to be dealt with at working-level talks between North Korea and the U.S.  It remains to be seen if President Moon’s recent U.N. speech and his summit with Trump will pave the way for working-level talks and a third summit between Pyongyang and Washington.