Kim Jong-un Visits Samjiyon ahead of Year-end Deadline for Nuclear Talks with U.S. 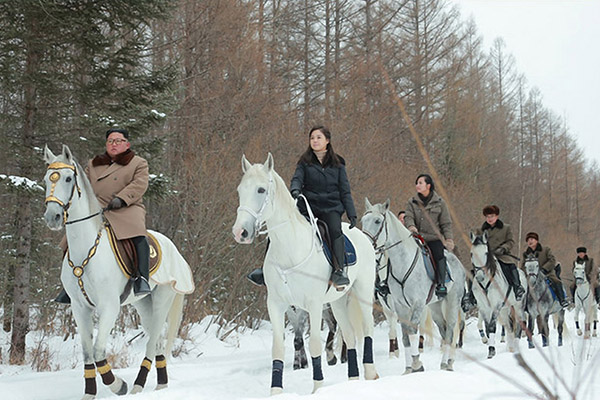 North Korean leader Kim Jong-un attended a ribbon-cutting ceremony on Monday for the completion of the township of Samjiyon County at the foot of Mt. Baekdu. Whenever Kim has made important political or diplomatic decisions, he has visited the mountain, which is regarded by many Koreans as a sacred place. With the year-end deadline North Korea has set for the nuclear negotiations with the U.S. approaching, attention turns to whether Kim will make a significant decision.

Here’s Shin Beom-chul, director of the Center for Security and Unification at the Asan Institute for Policy Studies, with more.

I think Kim visited the politically symbolic area to deliver a message to the U.S. The message is that he will take a “new way” if the U.S. fails to make additional concessions. Whenever he visited Mt. Baekdu, where his grandfather and North Korea’s founder Kim Il-sung led anti-Japanese guerilla activities, Kim implied that he regained his fighting spirit. The latest visit suggests that the North Korean leader might take a hawkish approach when carrying out his U.S. policy down the road.

Through his trip to Samjiyon, Kim also positively evaluated the completion of the construction of a newly-built township and underlined “self-reliance,” for which the nation stresses the importance of tourism and construction. In doing so, the leader sought to strengthen internal unity.

I imagine Kim may choose to adopt a hard-line stance toward the U.S., wield military threats against South Korea, if necessary, and emphasize his country’s self-reliance capability in the domestic economy.

Kim’s trip to Mt. Baekdu ahead of the year-end deadline for denuclearization talks between the North and the U.S. indicates that he could seek a new path if bilateral dialogue fails to produce any results. By visiting Samjiyon, he also celebrated the completion of the construction work there, despite harsh international sanctions, and showed his determination to tighten internal solidarity through self-reliance.

Samjiyon County is located close to Mt. Baekdu, a sacred place symbolizing the ruling Kim family’s hereditary succession structure known as the “Baekdu bloodline.” Kim Jong-un has used this place in the past to show that he was mulling over major policy changes.

Mt. Baekdu is the place where Kim Il-sung organized a military base for his anti-Japanese guerilla activities during the colonial era, and North Koreans believe that it ensures their regime’s legitimacy. That’s why Kim Jong-un has gone to the symbolic mountain every time he’s made important decisions. He visited back in November of 2013, right before the execution of his once-powerful uncle Jang Song-thaek(장성택), and in December of 2017, before creating a mood for inter-Korean dialogue in early 2018.

The leader’s latest visit to the area shows that his nation will seek self-reliance both in the economy and security. By demonstrating its nuclear capabilities, North Korea is likely to show to the outside world that it will never give up on its nuclear weapons development. Its relations with the U.S. and South Korea may worsen, but the North will try to find a breakthrough through cooperation with China and Russia.

Kim Jong-un’s recent Samjiyon visit suggests that he could make an important decision soon. He visited the location in October amid the stalled nuclear negotiations with the U.S.  On October 23rd, a week after his visit, the leader ordered his officials to demolish South Korean facilities at Mt. Geumgang, indicating a halt to cross-border cooperation and exchanges. Given these precedents, North Korea may possibly adopt new policies by making additional provocations and promoting the tourism industry for economic development.

Under these circumstances, a recent announcement by Ri Thae-song, North Korea’s vice minister for foreign affairs in charge of relations with the U.S., is drawing special attention as the message is clearly aimed at pressuring Washington.

North Korea demanded that the U.S. come up with new proposals in their denuclearization negotiations before the end of this year.

Ri has said that now it is entirely up to the U.S. what Christmas gift it will get to select. The comment hints at some kind of provocation around Christmas.

For Pyongyang, the best-case scenario is Washington making concessions. As the deadline imposed by North Korea itself is drawing near, however, it is pressed for time. Now, the North seems to be putting stronger pressure on the U.S. in a bid to gain concessions quickly. But in reality, North Korea is less likely to get what it wants.

However, the U.S. is also getting tougher on the North. While attending the annual summit of NATO leaders on Tuesday, U.S. President Donald Trump said that he has a very good personal relationship with Kim Jong-un but also hinted that his country may use military force against North Korea, if necessary.

I think Trump’s comment is an answer to North Korea’s message expressed as a “Christmas gift,” meaning that he will not yield to Pyongyang’s pressure. What Trump meant is that he still wants dialogue and that North Korea should implement denuclearization as agreed upon during the Singapore summit, but that he may also consider a military option, if necessary. Also, Trump again called Kim a “rocket man,” the term he last used in 2017, reflecting that he will never be swayed by North Korea. Therefore, the possibility of working-level talks between the North and the U.S. taking place is getting smaller, much less a bilateral summit.

As the year-end deadline is approaching, tension is rising again between North Korea and the U.S.

Trump has refrained from mentioning military force against the North since his first summit with Kim in Singapore in June of last year. But now, he is responding firmly to North Korea’s provocations, including the recent test of its multiple rocket launcher and the “Christmas gift” comment. Meanwhile, North Korea will convene a major ruling party meeting later this month.

North Korea will hold a plenary meeting of the Workers’ Party’s central committee in late December. The previous such gathering took place on April 9th this year, two days before the Supreme People’s Assembly meeting. During the upcoming party conference, the North may announce an important policy decision. It could be a hard-line policy toward the U.S. or a lower-level provocation like a satellite launch. Whatever the message, the party meeting is expected to reveal Kim Jong-un’s intention and what the nation’s “new path” will be about. I think more specifics will be announced at the leader’s New Year’s speech on January 1st next year.

The Workers’ Party’s central committee holds a plenary meeting when deciding on important strategies or policies. Following the breakdown of the second Kim-Trump summit in Hanoi in February, North Korea held a party meeting in April and adopted the policy of building the economy on its own. We’ll have to wait and see what decisions North Korea will make at the meeting in December, when tensions will likely escalate on the Korean Peninsula again.