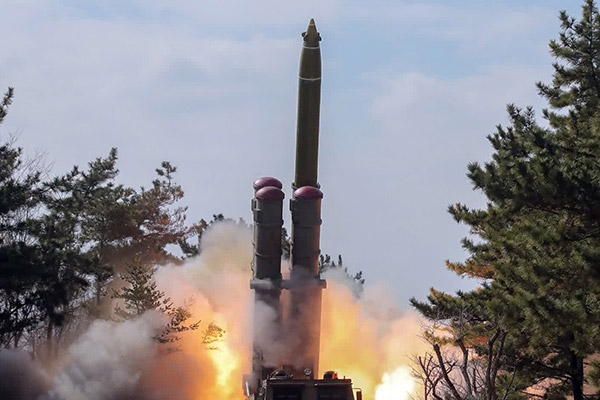 North Korea fired two short-range projectiles into the East Sea from around Wonsan at 12:37 p.m. on Monday, within a 20-second interval. The missiles traveled 240 kilometers at a maximum altitude of 35 kilometers. This is North Korea’s first missile launch this year and 95 days since the launch of two projectiles from what it called a “super-large multiple rocket launcher” on November 28th last year.

North Korea says the launch is part of its military exercises that it has conducted frequently, in an apparent move to stress that it was not aimed at making a provocation. The recent drills supervised by leader Kim Jong-un mostly involve the test of multiple rocket launchers and short-range missiles, which target South Korea, not the U.S. Nevertheless, the North argues that the test is part of its regular training.

However, some speculate that North Korea’s recent missile launch is actually a warning against the U.S. It’s been over a year since the no-deal Hanoi summit between the two countries, and the U.S. has yet to present a new proposal for their nuclear negotiations. Monday’s firing is seen as Pyongyang’s attempt to bring about a change in the deadlocked negotiations, as it just can’t wait until the presidential election in the U.S.

South Korea and the U.S. have decided to postpone their combined springtime military exercise in the aftermath of the COVID-19 outbreak in Korea. Pyongyang’s recent military move may show that it is still not satisfied with the decision.

North Korea might have tested a long-range missile, a submarine-launched ballistic missile or a missile engine in order to draw more attention from the U.S. But these tests require more preparations and higher costs. The North is discontent with a protracted stalemate in their working-level negotiations, and it seems to have chosen to send a lower-level warning to the U.S. through a short-range missile test.

But the U.S. doesn’t seem to worry about North Korea’s recent missile launches.

U.S. President Donald Trump has played down the North’s short-range missile launch, indicating that Washington will not respond to Pyongyang’s weapons test aimed at pressuring the U.S. each time unless they pose a grave threat to the U.S. mainland.

For now, Trump is focusing his efforts on preventing the COVID-19 virus from spreading in the U.S. In regards to North Korea-related issues, the Trump administration seems to be simply managing the situation just the way it is, in the belief that any serious response to North Korea may affect the presidential election negatively.

Many analysts in the U.S. say that Trump is not very interested in North Korea at the moment. Conflict between the U.S. and Iran is escalating, while Trump has been cleared of impeachment charges. In this situation, it is reported in the U.S. that Trump believes there’s no need to rush to improve relations with North Korea. On the flip side, North Korea is getting anxious. I think that’s why the North is trying to make some provocations.

Many experts speculate that North Korea’s missile firing early this week contains a message toward the domestic audience. North Korea would make provocations, large or small, in March almost every year, taking issue with the South Korea-U.S. combined military exercise. But this year, the North has no reason to justify provocations since the exercise, in effect, has been cancelled.

Its official newspaper, the Rodong Sinmun, has said that some 7,000 local residents showing symptoms of the novel coronavirus have been placed under quarantine. It appears that North Korea resorted to a provocation in order to quell public jitters and solidify internal unity.

If the recent projectiles were strategic weapons or threatening new weapons, they could have been a negotiating card to be shown to the U.S. or the international community.

But many assume that the short-range projectile firing had the purpose of boosting the military’s morale and strengthening internal solidarity.

The South Korean government is also echoing this view.

With the North Korean economy as well as public sentiment deteriorating, many predicted that leader Kim Jong-un, who is in a predicament, may launch provocations. North Korean media reported that Kim attended the latest military drills to show to the people that his leadership remains undiminished and the regime is maintained well. In an apparent bid to step up internal discipline, North Korea has recently held a politburo meeting of the ruling Workers’ Party and dismissed high-ranking party officials.

North Korea’s recent provocation, whatever its intentions are, may deal a blow to the South Korean government. The missile firing came only a day after President Moon Jae-in proposed inter-Korean cooperation in the healthcare area amid the global spread of the COVID-19 virus during his speech marking the 101st anniversary of the 1919 March 1 Independence Movement. Clearly, the North has drawn the line at inter-Korean dialogue yet again.

Regarding the South Korean presidential office’s regret over Pyongyang’s projectile launches, North Korean leader Kim Jong-un’s sister Kim Yo-jong poured out raw criticism of the presidential office, calling it “mentally challenged.” She slammed it for its foolish and presumptuous response to North Korea’s drills, which were part of routine self-defense exercises and were not aimed to threaten anybody.

While Kim used many scathing words to condemn the presidential office, she stopped short of directly criticizing President Moon. In a statement, she stresses that South Korea, which conducts its own military drills and even purchases strategic weapons, has no right to comment North Korea’s self-defensive training.

It appears that the North’s strongly worded statement is intended to raise its bargaining power.

In another move to upset the Seoul government, the aggressive language was used by the leader’s sister, the first vice-department director of the Central Committee of the Workers’ Party.

The problem is whether North Korea will launch more provocations down the road. There are concerns that this week’s short-range projectile firing could be a prelude to stronger provocations. We cannot rule out the possibility that North Korea may overreact in a bid to up the ante in negotiations with the U.S. amid the fast spread of the COVID-19 virus and the standstill in the bilateral denuclearization talks.

North Korea conducted joint strike drills for three years in a row starting in 2015 but skipped them in 2018 and 2019. Diplomatic experts say that the resumption of the drills shows North Korea’s intention to stoke military tension in the future.

North Korea may unveil a new strategic weapon that was mentioned by Kim Jong-un. The strategic weapon here is not a mere multiple rocket launcher or a ground-to-ground missile. Rather, it could be a new type of intercontinental ballistic missile or submarine-launched ballistic missile. This is the most disturbing part. That’s why the U.S. is strengthening its watch over North Korea. If the U.S. continues to remain silent about North Korea’s various demands, Pyongyang will not just sit idle. That is, the North will not wait for the U.S. presidential election but may launch additional provocations.

The South Korean government, meanwhile, has expressed its position that it will push ahead with inter-Korean cooperation programs in a steadfast way. The Unification Ministry in Seoul said on Tuesday that it will think outside of the box and come up with new ideas to expand room for cross-border ties.

North Korea’s latest missile launch, the first of its kind in about three months, could be a message toward the South Korean government. It could be a signal for further provocations or Pyongyang’s own effort to boost internal unity amid social unrest stemming from the COVID-19 virus and worsening economic difficulties.

Attention is drawn to North Korea’s next movement.