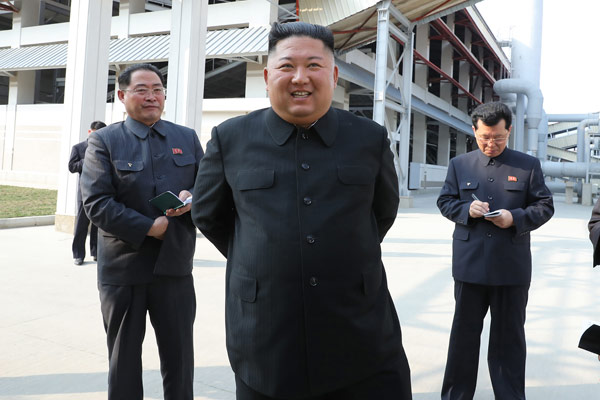 North Korean leader Kim Jong-un has reemerged into the public eye, following a 20-day absence and rampant speculation about his ill health. On May 2, North Korea’s official Korean Central News Agency reported that the leader attended a ceremony celebrating the completion of a fertilizer factory. He attended the ceremony located in Sunchon, South Pyongan Province on Labor Day, May 1. He was accompanied by his sister Kim Yo-jong and senior party members who had also disappeared with him. The leader was seen cutting the ribbon at the factory and praising some participants, with a smile on his face. Let’s hear from political commentator Lee Jong-hoon.

Kim’s reappearance demonstrates that he is alive and well. The North Korean leader has been out of public view at times before to raise speculation about his deteriorating health. But after a certain period of time, he surfaced again, just as his father and grandfather did. This time, too, he made a surprise comeback, as if to show himself to the foreign media. He smiled a lot, but it seemed to me that he forced himself to laugh. He didn’t really look healthy. Personally, I suspected that he had been a bit sick.

Following Kim Jong-un’s absence from an April 15 commemoration of the birthday anniversary of his late grandfather, rumors about his health spread fast. It was the first time that he was not seen at the important event since he came to power.

Speculation about the health status of the North Korean leader spread around the world after CNN, one of the influential media outlets in the U.S., reported that there might be something wrong with the North Korean leader’s health. Ji Seong-ho, a North Korean defector-turned-South Korean lawmaker-elect, even claimed that he was 99 percent sure that Kim was dead. There were also rumors that Kim had fallen ill with COVID-19 or that he hurriedly retreated to Wonsan, because one of his subordinates was stricken with the virus.

However, the South Korean government repeatedly dismissed the persistent speculation, saying that no unusual signs had been detected in North Korea.

I’d say that politically biased information or reports have fueled the speculation further. We could be exposed to incorrect information about the closed natured of North Korean society. Typically, the North Korean leader’s activities are confirmed after a certain period of time when the local media unveil them. Either that or, intelligence agencies find out what is actually going on in the reclusive North by activating various channels. But the process takes time. This time, Kim was out of public eye for a relatively long time, leading to swirling rumors over his health. Of course, this is not common.

But I think media outlets should be careful about dealing with groundless rumors.

The South Korean government has various means and channels to collect information about North Korea. It frequently analyzes information through satellite images by cooperating with the U.S. intelligence authorities.

Attention was drawn to the fertilizer factory where Kim Jong-un reappeared last week. The leader visited that location earlier this year as his first inspection tour of 2020. This was right after he pledged to make a frontal breakthrough to tackle challenges at the key party meeting late last year. The North Korean economy is in a crisis due to COVID-19. The ceremony marking the completion of a fertilizer plant, which has to do with public livelihoods, is regarded as the right place for the leader to show his commitment to building a self-reliant economy.

The ceremony took place on Labor Day, a very important day in the socialist state of North Korea. The North has stressed self-reliance consistently, as seen at the Supreme People’s Assembly last month. Unfortunately, the suspension of trade between North Korea and China, as a result of the COVID-19 outbreak, has made the already struggling North Korean economy even more difficult. Against the backdrop, improving public livelihoods and achieving a self-reliant economy are becoming all more important. The North Korean leader’s reappearance at the fertilizer factory can be understood in this context.

Despite Kim’s return, some are still suspicious about his health conditions. Probably for that reason, many are interested in who will succeed him in the case of his absence. CNN has brought to light the possibility that his sister Kim Yo-jong, first vice department director of the ruling Workers’ Party Central Committee, may become the next leader of North Korea. In a report released on April 29, South Korea’s National Assembly Research Service also said that Kim Yo-jong’s role and status could be expanded as a successor.

If Kim Jong-un gets sick, North Korea will mobilize all possible means to cure the top leader. But no one can guarantee his health. Even British Prime Minister Boris Johnson and the wife of Canadian Prime Minister Justin Trudeau contracted COVID-19. The obese North Korean leader has probably been concerned about his health and chose his sister as the one who may replace him when his health worsens. Kim Yo-jong’s power has actually been strengthened lately. It is highly possible that she will succeed the current leader in case of emergency.

U.S. President Donald Trump has said he is glad to see North Korean leader Kim Jong-un “back and well.” He has retweeted pictures showing Kim cutting the ribbon at the fertilizer factory ceremony. He has also said that he could engage in dialogue with Kim. Trump’s positive response to Kim’s return raises hopes that the so-called “top-down” communication between the two leaders may facilitate bilateral dialogue. The two countries may have held behind-the-scenes dialogue. If not, is Trump using his typical exaggerated rhetoric?

Simply put, Trump is desperate to find a breakthrough. The U.S. president has come under intense criticism for failing to respond to the COVID-19 pandemic properly, due to the skyrocketing number of infections and deaths in the country. This is bad news for Trump, who is preparing for his reelection bid. He may believe he can find a breakthrough by using the North Korean issue. He could attempt to win public support by showing that he is successfully dealing with diplomatic issues concerning Iran or North Korea. I would guess that Trump and Kim may hold a telephone conversation.

Meanwhile, on May 3, gunshots from North Korea hit a South Korean guard post in the Demilitarized Zone in the eastern province of Gangwon. The South Korean military responded by firing warning shots. The shooting occurred one day after the North Korean state media reported their leader’s return. Fortunately, South Korea suffered no casualties.

The South Korean military authorities have been examining the details of the incident, which was the first violation of the September 19 inter-Korean military agreement in the border area.

The United Nations Command is investigating North Korea’s shooting of a South Korean guard post to determine whether it was intentional or accidental. Both the South Korean military and U.S. Secretary of State Mike Pompeo say it was an accident. I agree with that. It is too minor to be called an intended provocation. In a bid to provoke South Korea or the U.S., North Korea has so far used missile launches, not gunshots. If Kim Jong-un had really intended to show something or draw attention after his return, he would have fired short-range missiles at least.

Kim Jong-un is expected to concentrate on addressing economic issues and improving public livelihoods for the time being. In the past, he would stay out of public sight for some time and appear again to inspect places related to people’s lives, such as a fish farm and a shoe factory. North Korea is apparently focused on rebuilding the economy. So attention turns again to whether it will respond positively to the South Korean government’s plans for inter-Korean economic cooperation. To start with, the two sides may hopefully discuss the reconnection of cross-border railways and individual tours by South Koreans to North Korea.