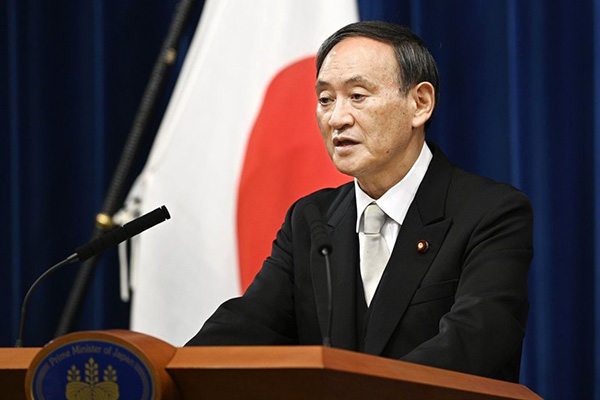 Japan’s new Prime Minister Yoshihide Suga has said that he would like to meet North Korean leader Kim Jong-un without any conditions to resolve the issue of North Korea’s abduction of Japanese citizens. Suga made the remarks during a press briefing on September 2, when he launched his bid to become prime minister. During his first press conference as the country’s new prime minister on September 16, he did not mention relations between South Korea and Japan but again put top priority on the abduction issue. Even before his bid for the premiership, Suga stressed that he would inherit the policies of his predecessor Shinzo Abe and expressed his strong commitment to resolving the abduction issue as well as the North Korean nuclear crisis. Here’s Dr. Oh Gyeong-seob from the Korea Institute for National Unification with more.

Right before the Liberal Democratic Party’s leadership election in Japan, Suga reportedly met officials of organizations related to kidnapping victims. At the time, he promised to make efforts to push for normal dialogue with North Korea to address the abduction issue. He said that he had worked at the Headquarters for the Abduction Issue as the Chief Cabinet Secretary and that his desire to find a way for the solution of this issue was all the same as Abe’s.

Suga has shown great interest in the issue and engaged in relevant activities since 2002. His relationship with Abe started around that time. He has repeatedly said that he will carry on with Abe’s policies, so he is expected to make efforts toward the abduction issue with a sense of duty.

North Korea kidnapped Japanese citizens from the late 1970s to the early 1980s to teach the Japanese language to communist spies. The kidnapping issue was made public when Kim Hyun-hui, the former North Korean agent responsible for the mid-air bombing of a South Korean passenger plane in 1987, revealed that she had learned Japanese in North Korea from a Japanese abductee.

A Japanese woman named Megumi Yokota is considered as a symbol of Japanese victims kidnapped by North Korea. The abduction of Yokota was confirmed by Ahn Myeong-jin, a North Korean spy who defected to South Korea.

In a series of incidents from 1977 to 1983, young people in their 20s disappeared near the seashore in Japan. They were all abducted by North Korea. For example, Yaeko Taguchi was kidnapped by the North in June 1978 was given a Korean name, Lee Eun-hye. It turned out that she taught Japanese to Kim Hyun-hui. Another abductee Megumi Yokota was kidnapped by North Korean agents in Niigata City on November 15, 1977, at the age of 13. In 1986, she married a South Korean man named Kim Young-nam who was also abducted by the North.

Pyongyang said that she committed suicide at a hospital in 1994 and she was cremated in 1997. Her ashes were returned to Japan in 2004, after the leaders of Japan and North Korea agreed on the abduction issue in 2002. But the result of a DNA test showed that the remains were not Yokota’s. It is still uncertain whether she is dead or alive.

Japan and North Korea had been at odds over the abduction issue for a long time before former North Korean leader Kim Jong-il and his Japanese counterpart Junichiro Koizumi held a summit on September 17, 2002. At the first-ever summit between the two countries, the North Korean leader admitted to the kidnapping of Japanese nationals and apologized. Accordingly, North Korea returned five out of 13 abductees to Japan, saying that the other eight had died.

However, the kidnapping issue was not resolved, as the two sides still had different positions on this issue.

While Japan identified a total of 17 Japanese people as victims of abduction, North Korea claimed that it kidnapped 13. The North explained that eight out of the 13 people had died of a heart attack, traffic accident or gas poisoning. It also said that it couldn’t find the bodies of six people because their tombs were washed away in floods. But Japan doubted the claim that the eight abductees, who were young and healthy people in their 20s and 30s when they were abducted, all died. Moreover, it turned out that their death certificates were hurriedly created at the time of Koizumi’s North Korea visit.

At the second North Korea-Japan summit in 2004, Pyongyang acknowledged that it fabricated all the eight death certificates and promised to reexamine the life status of the abductees. But North Korea-Japan negotiations were later suspended, and this issue remains unresolved.

Tokyo and Pyongyang agreed to reinvestigate the abduction cases during their meeting in Stockholm, Sweden on May 28, 2014.

At the time, North Korea said it would organize a special investigation committee, while Japan agreed to lift part of its sanctions against the North in line with the result of the investigation. But North Korea did not keep its promise to notify Japan of the investigation result but went ahead with its fourth nuclear test. With Japan imposing sanctions on the North, their negotiations have been stalled to this day. The Tokyo government is making an all-out effort to look into the relevant cases at the state level in order to bring all its abductees remaining in North Korea back home safe and sound.

On January 25, 2013, the Japanese government established a headquarters to deal with the abduction issue. This was with the prime minister serving as the director and three ministers, including the chief cabinet secretary, assuming the role of vice director. The government, as well as ruling and opposition parties, have consistently held meetings to discuss this issue. Japan has also promulgated a law concerning countermeasures against North Korea’s abduction and human rights infringement.

All Japanese citizens give full support for the abduction issue, which is the biggest concern for the political community. If a prime minister, whoever he is, manages to resolve this problem, it would be his greatest political achievement. That’s why the Tokyo government has been making so much effort to solve the issue.

Attention turns to if there will be any positive change in the strained North Korea-Japan relations after the inauguration of the new prime minister in Japan. But most analysts predict that North Korea will be rather indifferent to Japan’s efforts to improve bilateral ties, since Suga pledged to inherit the policies of Abe, who clashed with North Korea over major issues. It is said that the Suga Cabinet will complete its new defense policy within the year—the policy that legitimizes Japan’s preemptive strike on North Korean missile sites. If that happens, North Korea-Japan relations will likely worsen further.

The key is how nuclear negotiations between North Korea and the U.S. will turn out. As far as the North Korean nuclear issue is concerned, the Abe government maintained strong cooperation with the U.S. and imposed harsh sanctions on North Korea. The Suga government is expected to keep Abe’s diplomatic policies in place, based on the Japan-U.S. alliance. Considering Suga’s diplomatic strategies, which will be almost identical to Abe’s, it is very unlikely that North Korea will actively pursue dialogue with Japan.

Meanwhile, South Korean Unification Minister Lee In-young met with Japanese Ambassador to Seoul Koji Tomita on September 1 and asked for Japan’s support for the Seoul government’s efforts to improve relations between South and North Korea. Lee stressed that progress in inter-Korean ties will be highly important not only for the two Koreas but for peace and stability in the entire region of Northeast Asia. He also said that South Korea sincerely hopes for an improvement in Japan-North Korea relations and that the Seoul government is eager to cooperate in the process.

While the Suga government has expressed its commitment to mending ties with North Korea, it has shown no interest in a better relationship with South Korea. That’s probably because Japan believes the abduction issue is related to its national interest but it doesn’t see any point in quickly improving ties in South Korea for now. At present, what the Seoul government can do is to continue with behind-the-scenes dialogue with Tokyo to improve bilateral relations, while making consistent efforts to restore dialogue with North Korea.

During the meeting with the South Korean Unification Minister, Tomita said that Japan remains consistent in its North Korea policy, as it hopes to deal with their unfortunate past, namely, the abduction issue, before normalizing bilateral relations. The Seoul government should closely watch how North Korea and Japan will handle this thorny issue and how their relations may evolve under the Suga government.