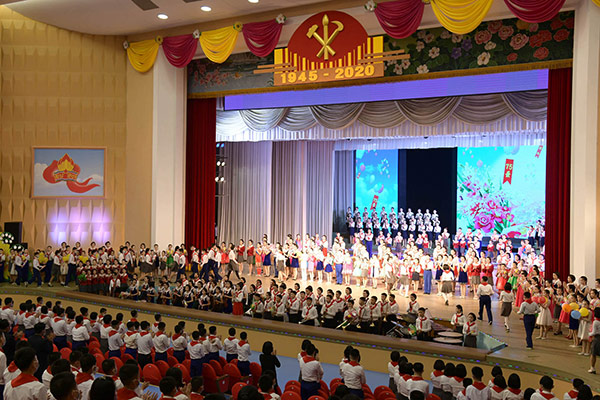 North Korea will commemorate the 75th anniversary of the founding of its ruling Workers’ Party on October 10. In the run-up to the party foundation day, North Korea has been eager to create a festive mood as the communist state typically celebrates fifth and tenth anniversaries in a big way.

On October 3, the Rodong Sinmun, the official newspaper of the ruling party, and a monthly political magazine issued a joint editorial praising the party’s achievements. On October 6, the newspaper highlighted the atmosphere in Pyongyang, under the title of “The capital of Pyongyang is in a Festive Mood.” Here is political commentator Lee Jong-hoon with more.

North Korean reports show that there is a carnival atmosphere throughout the country. This year, North Korea is focusing on cleaning up the environment in Pyongyang and seeks to complete the recovery of flood damage before the anniversary in order to promote the leader’s achievements. The farming sector has been working hard to maximize agricultural output, while various exhibitions have been held. Early this month, North Korea issued commemorative coins in gold and silver engraved with the logo of the Workers’ Party. Late last month, it also unveiled two propaganda paintings containing the message of “The Highest Glory to Our Great Party.”

In North Korea, the anniversary of the party being founded is one of the most important holidays, along with the nation’s founder Kim Il-sung’s birthday on April 15, which is called by North Koreans the ‘Day of the Sun.’

North Korea advocates the “party-first” policy. It’s no exaggeration to say that the party administers every state affair. North Korea officially says that the party is the people. The party logo features a hammer, sickle and brush, which symbolize workers, farmers and intellectuals, respectively. The nation uses the party foundation day as an opportunity to emphasize unity among the people.

Attention turns to what achievements North Korea will promote on this year’s party founding anniversary.

Apparently, being conscious of the no-deal summit between North Korea and the U.S. in Hanoi in February last year, Pyongyang stressed the importance of self-reliance and a “frontal breakthrough” during a plenary meeting of the Workers’ Party late last year. It has massively publicized its construction and production industries, in particular. On October 5, the Rodong Sinmun newspaper underlined the successful recovery work in typhoon-hit regions and the redevelopment of areas near Pyongyang International Airport. The paper also reported that this year’s production of potato powder at a factory in Samjiyon, Ryanggang Province, increased from last year.

However, North Korea has changed this year’s plans several times, in the aftermath of the COVID-19 pandemic and natural disasters.

The construction of the Wonsan-Kalma coastal tourism zone is one of the development projects Kim Jong-un is greatly interested in. It was initially scheduled for completion in April this year, timed with the Day of the Sun. But it hasn’t still been completed yet. Also, the North Korean leader earlier pledged to complete the construction of Pyongyang General Hospital by the party foundation day on October 10. In fact, his economic plans have failed to fulfill their goals over the last five years.

On a rare occasion, he admitted to the failure of his economic policy during a plenary meeting of the Central Committee of the party in August. At a politburo meeting of the party early this week, Kim ordered an 80-day battle to boost the economy. Obviously, North Korea’s economic plans are facing a setback. The country has no other choice but to admit the current situation just the way it is. North Korea tells its people that they can still catch up on things by working hard until the year’s end.

While North Korea has very few economic achievements to show off, it could use a large-scale military parade as a means of demonstrating the significance of the 75th party founding anniversary.

Kim Jong-un mentioned a “new strategic weapon” during a party plenary meeting at the end of last year. Many North Korea watchers believe that the weapon might be a new intercontinental ballistic missile or ICBM capable of carrying multiple warheads. Citing its analysis of satellite imagery last month, 38 North, which is a U.S.-based website specializing in North Korea, said that it detected objects presumed to be launchers for a new ICBM at Mirim airfield in Pyongyang. North Korea may possibly unveil a new weapon during a military parade.

North Korea may want to show to the outside world that it continues to make efforts to enhance its defensive capabilities. It could unveil a newly developed long-range missile during a military parade. It is said that four transporter-erector-launchers were spotted at Mirim airfield, while activities related to a submarine-launched ballistic missile were also detected near the Sinpo shipyard. Analysts suspect that North Korea may show a new type of ICBM with multiple warheads or a new solid-fuel ICBM at the parade.

But considering the unfavorable situation both inside and outside the country, North Korea may scale down its military parade. Uncertainties linger over North Korea-U.S. relations ahead of the U.S. presidential election, which is less than a month away. Domestically, North Korea is in a very difficult situation due to economic hardships, recovery from flood damage and disease control efforts against COVID-19. Therefore, its military parade could focus more on boosting morale internally than on demonstrating military power outwardly.

Some others, on the other hand, predict that North Korea may go ahead with a provocation it has refrained from, as U.S. President Donald Trump’s positive test for COVID-19 has darkened the prospects for top-down diplomacy between North Korea and the U.S.  But commentator Lee says the possibility of North Korea’s provocation is low.

If North Korea chooses to employ a brinkmanship tactic, the situation might deteriorate even further. Kim Jong-un has exchanged letters with Trump and South Korean President Moon Jae-in to maintain relatively good relations at the summit level. A long-range missile launch at this point in time will definitely throw a chill upon this mood. If the North turns hostile toward the U.S., it will turn the clock backward and lead to its own isolation. Therefore, I don’t think North Korea will go to extremes.

Attention is also drawn to whether Kim Jong-un will make a public speech on the occasion of the party foundation anniversary this year. Analysts say he may deliver a message to his people, noting that he made a 25-minute speech five years ago.

North Korean media outlets have begun to use a new expression, “Kim Jong-un’s Powerful Country.” I imagine North Korea probably wants to add the word “nuclear” to this phrase. In doing so, it would to show that the country has already completed nuclear weapons development and actually possesses them so it has joined the ranks of powerful countries. In light of this, Kim Jong-un may deliver a speech on the party foundation day. But his message is likely to focus more on the domestic audience than on the international one, considering that North Korea has endured many difficulties this year.

Some predict that North Korea may not hold any event marking the party founding anniversary or reduce its scale in line with anti-virus measures. The international community is paying attention to how North Korea will commemorate its party anniversary later this week and what message it will announce.