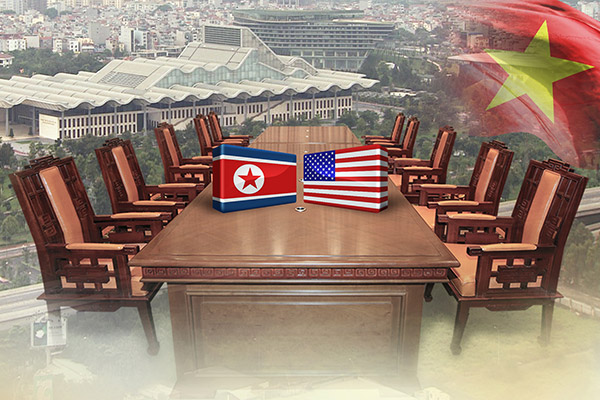 The Vietnamese capital of Hanoi is set to host the second summit between U.S. President Donald Trump and North Korean leader Kim Jong-un on February 27 and 28. Much attention is now focused on the Southeast Asian country, which has emerged as a possible economic model for North Korea. Here’s Professor Lim Eul-chul at the Institute for Far East Studies at Kyungnam University to discuss why Vietnam was chosen as the venue for the second summit between Trump and Kim and what Vietnamese-style economic development means for North Korea.

I’d say keywords for the second North Korea-U.S. summit are peace and prosperity. Once North Korea gives up its nuclear ambitions and peace settles on the divided Korean Peninsula, the nation will see a greatly different future, in which it will be able to enjoy economic prosperity. The U.S. continues to deliver this message to North Korea. Vietnam could be a symbolic location where peace can be exchanged for economic prosperity.

The summit is highly important for North Korea, of course, but Pyongyang also wants to advance its relations with Vietnam to a higher level. In this sense, I think the Vietnam summit can be more significant than the Singapore summit.

By choosing Vietnam as a summit location, the U.S. apparently wants to show North Korea what the communist nation can gain if it abandons its nuclear weapons development and cooperates and integrates with the international community.

Moreover, Vietnam is more historically significant for North Korea than Singapore, the venue for its first summit with the U.S.

North Korea’s blood allies are China and Vietnam. North Korea sent troops and war supplies to Vietnam during the Vietnam War. Similar to North Korea, Vietnam once regarded the U.S. as a bitter enemy and their relations remained hostile for a while. After improving its ties with the U.S., however, Vietnam was able to develop its economy in a dramatic way. In this vein, Vietnam could be a source of inspiration for North Korea. North Korea and Singapore have maintained friendly relations since they established diplomatic relations in 1975. In a historical context, however, Vietnam has more symbolic significance for North Korea as a blood ally and socialist brother.

With a population of 5.5 million, Singapore’s per-capita gross domestic product or GDP was estimated at 61,716 US dollars in 2018—the ninth-highest in the world. In contrast, North Korea’s per-capita GDP stands at just 1,000 dollars.

But compared to Singapore, Vietnam could be a more realistic model for North Korea. Professor Lim explains Vietnam’s “Doi Moi” program, through which the nation successfully achieved economic growth.

Doi Moi means “reform.” Under this economic drive, Vietnam adopted some elements of capitalism by opening its market and actively attracting foreign capital, while still maintaining a communist system politically. But Vietnam’s model for reform and openness proved to be successful only after it mended ties with the U.S. Vietnam carried out reform measures for years amid hostile relations with the U.S., but those measures didn’t work. But after normalizing relations with the U.S., Vietnam showed substantial economic growth.

Both Vietnam and North Korea were faced with an economic crisis after the collapse of the communist bloc. But they reacted differently. Vietnam started the Doi Moi reform policy in 1986 and aggressively sought foreign investment. Its GDP jumped 14 times in three decades with average annual growth of more than 7 percent, transforming Vietnam from one of the poorest countries in the world to the 47th-largest economy.

North Korea, on the other hand, chose a path of self-reliance. Even after it suffered from extreme economic hardships in the 1990s and widespread famine gripped the nation, the North refused to give up nuclear weapons technology, deepening its diplomatic and economic isolation. As a result, North Korea is still dealing with severe economic difficulties.

North Korea did explore some ways to remedy its situation. One particular method was free trade economic zones of the kind adopted by China in the late 1970s and 80s, which ultimately proved to be catalysts for the country’s booming economy over the past several decades.

But Professor Lim note that Chinese-style economic reforms differ from those found in Vietnam.

When Vietnam initiated the Doi Moi program in 1986, it employed many parts of the Chinese model. China began to adopt a policy of reform and openness in 1978, and the Vietnamese government watched China experiencing trial and error for years. Vietnam used the advantages of a late starter and created its own model for economic development. In its reform drive, Vietnam adopted principles of decentralization, privatization and marketization. In this regard, it is similar to the Chinese model. North Korea also tries to benchmark this version of reform.

But Vietnam utilized state-owned enterprises more actively than China. In another difference, China attracted foreign investment through special economic districts, while Vietnam did not adopt this approach in the early stages.

Deng Xiaping guided China toward economic reform after coming to power in the late 1970s. In 1979, it selected cities close to Hong Kong and Taiwan such as Shenzhen, Zhuhai and Shantou and nurtured them as special districts for exports. The strategy turned out well, as China is now the world’s second largest economy measured in GDP.

Thus, whether or not Pyongyang embraces Vietnamese-style economic reforms may hinge on the shape and form of international sanctions after the second North Korea-US summit later this month. Attention now shifts to what North Korea can obtain in Vietnam.

For North Korea, it is important to get sanctions relief. But it is highly crucial to first get Washington’s guarantee of the security of its regime. If the U.S. declares a formal end to the Korean War, establishes a liaison office in Pyongyang or allows American companies to invest in North Korea, any of these measures can be seen as ensuring the security of the communist regime. That’s why North Korea demands that the U.S. take some symbolic action to show that it will no longer employ a hostile policy toward the North.

One of the points we could focus on is what kind of economic cooperation Kim Jong-un will conduct with Vietnam. The key of the Vietnamese model is to introduce a market economy and lure foreign capital. We’ll see how Vietnam will teach North Korea its expertise in these areas.

Trump said recently on Twitter that North Korea can become an economic rocket. This may be interpreted as a message to Kim Jong-un that economic power is attainable if and when he abandons his nuclear ambitions.

Kim Jong-un will become the first North Korean leader to visit Vietnam in 54 years since his grandfather and founder of the North Korean state Kim Il-sung visited the Southeast Asian country in 1964. We’ll have to wait and see how the future of North Korea may change after the summit in Vietnam.