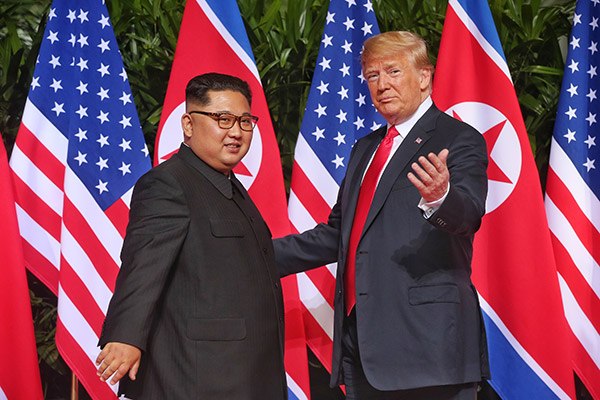 U.S. President Donald Trump and North Korean leader Kim Jong-un will hold their second summit in Vietnam on February 27 and 28. Trump announced the summit dates and venue during his State of the Union address on Tuesday, February 5, raising hopes for the process of denuclearizing the Korean Peninsula and establishing a peace regime to move forward again. Here’s Kim Hyun-wook, professor at the Korea National Diplomatic Academy.

Vietnam, Indonesia and Thailand were previously mentioned as possible host countries for the second North Korea-U.S. summit, as those countries are close enough to North Korea that Kim Jong-un can travel by air. Among them, Vietnam is the closest. I imagine Kim will fly to the Southeast Asian country on his private jet Chammae-1.

The North Korean leader may want to model the Vietnam-style economic reform and openness policy in order to develop the North Korean economy and solidify his regime. With this purpose in mind, Kim could make an inspection tour of economic facilities in Vietnam in addition to his second summit with Trump.

Now that North Korea and the U.S. have set the date and location for their second summit, the big question is whether the two sides will be able to find a practical breakthrough in their stalled denuclearization talks.

Trump needs to make substantial progress in denuclearizing North Korea before the second half of the year when the U.S. will enter the presidential election campaign period. And his second summit with Kim should be the beginning of the progress.

North Korea, for its part, will find it increasingly difficult to revive its economy if it fails to receive a sanctions exemption at the upcoming summit. In return, though, North Korea should give something to the U.S., that is, practical denuclearization. In this respect, both Pyongyang and Washington feel pressured to achieve a more specific outcome at their second summit.

Leaders of North Korea and the U.S. met face-to-face on Sentosa Island in Singapore last June to take the first step towards ending 70 years of hostility between the two countries, and to signal the beginning of a nuclear-free Korean Peninsula.

Despite the historical significance of that first-ever summit between North Korea and the U.S., however, the four-point joint statement announced at the summit was criticized for lacking specifics. That’s why many say the second summit should produce more tangible results. Both Kim and Trump need a substantial outcome for their own domestic reasons.

The most important topic will be Pyongyang’s denuclearization and Washington’s reciprocal measures. Speaking at Stanford University lately, U.S. Special Representative for North Korea Policy Stephen Biegun said that when U.S. Secretary of State Mike Pompeo visited Pyongyang last October, Kim Jong-un promised to dismantle his country’s uranium enrichment facilities in addition to nuclear facilities in Yongbyon. Biegun also stressed that the U.S. wants North Korea to provide a full declaration of its nuclear and missile programs and that the U.S. should ultimately ensure the removal and destruction of the North’s stockpiles of fissile material, missiles and other weapons of mass destruction.

For the upcoming summit, Washington’s first goal is to reach an agreement with Pyongyang on a roadmap for the dismantlement of North Korea’s nuclear programs.

Many analysts predict this second summit will touch on denuclearization measures demanded by the U.S., such as the dismantlement of North Korea’s Punggye-ri nuclear test site and its Tongchang-ri missile engine test site as well as dismantlement verification. Kim Jong-un has directly and indirectly expressed his intention to dismantle the Yongbyon nuclear facilities and accept inspection of the nuclear complex there. Along with this issue, moving intercontinental ballistic missiles out of North Korea could also be put on the table.

Pyongyang is seeking what it calls reciprocal measures from Washington.  Those may include signing a peace treaty and lifting sanctions on North Korea.  What the U.S. may actually offer is a possible establishment of a liaison office between the two countries and a declaration to formally end the Korean War.

The major bone of contention is how extensively North Korea will accept inspection of its nuclear facilities and whether the U.S. will ease sanctions at a level North Korea wants. Except for this part, I don’t think it is difficult for the two sides to reach an agreement.

If the North offers a nuclear freeze, for instance, the U.S. may agree to declare an official end to the Korean War and set up a liaison office. If the two sides agree on an end-of-war declaration, the planned second North Korea-U.S. summit and the U.S.-China summit will be an appropriate occasion to do so.

But again, nuclear inspection and sanctions relief will comprise the key of the negotiations.

North Korea should take additional measures for complete denuclearization, while the U.S. should establish new relations with the North and set up a lasting peace regime on the Korean Peninsula in return. But the two countries must first decide on what to do in what order to draw up a clear roadmap for North Korea’s denuclearization and a peace process on the Korean Peninsula.

Citing a possibility that the U.S. will also have a summit with China in Vietnam late this month, some analysts speculate that South Korea, North Korea, the U.S. and China may engage in four-party talks on an end-of-war declaration.

For now, however, North Korea and the U.S. are activating working-level negotiations.

I guess the working-level talks will continue until the summit. It is said that the two sides are fine-tuning a final agreement or a big deal, with many blanks still left unfilled, although they have already agreed on a small deal. The big deal here refers to an agreement on denuclearization and corresponding actions. Both sides will continue to try to fill the blanks at working-level negotiations, and I hope they will finish coordinating their differing views before the summit.

Biegun visited Pyongyang on Wednesday, February 6, to discuss agenda items of the second summit with his North Korean counterpart Kim Hyok-chol. With three weeks to go, international attention is focused on how North Korea and the U.S. will narrow their differences and how the result will be reflected at the Vietnam summit.