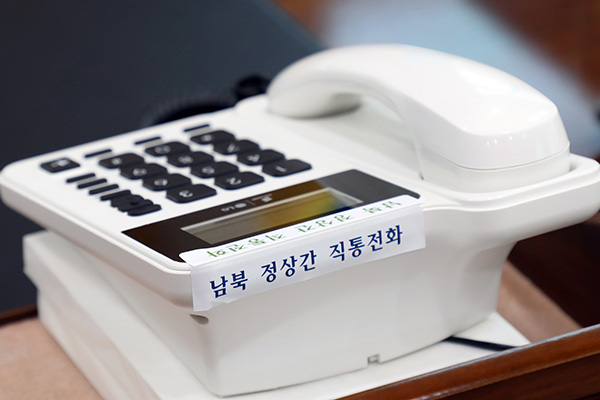 North Korea announced on Tuesday that it would cut off all communications lines with South Korea, including the hotline between their leaders, starting noon that day. This was in response to the Seoul government’s failure to stop South Korean activists from sending anti-Pyongyang leaflets across the border. According to North Korea’s official Korean Central News Agency, the decision was made by two officials in a meeting on Monday. The two figures refer to Kim Yo-jong, first vice department director of the Central Committee of the Workers’ Party and Kim Yong-chol, vice chairman of the committee. The drastic move is in line with Kim Yo-jong’s previous statement on June 4 and another statement released by the United Front Department in charge of South Korean affairs the following day. In a word, North Korea made it clear that it would completely sever its relations with South Korea. Here is political commentator Lee Jong-hoon with more.

It looks like North Korea’s typical brinkmanship tactic. Pyongyang is furious about South Korean activists’ practice of sending leaflets severely criticizing the communist regime to the North by using large balloons. North Korea believes the leaflets offend the regime’s personality cult built around its leader Kim Jong-un. In the North, the leader is considered sacred, like his grandfather and the nation’s founder Kim Il-sung. Photos have shown the leader climbing Mt. Baekdu on a white horse. It is difficult for the North to tolerate the South Korean propaganda flyers containing insulting content regarding the North Korean leader.

North Korea’s state media and propaganda outlets have expressed outright hostility toward South Korean authorities, which they claim have failed to block the South Korean activists’ leaflet campaign. On Wednesday, the official Rodong Sinmun newspaper reported the public demonstration of a women’s association the previous day in front of the Sinchon Museum in South Hwanghae Province. Featuring the theme of a massacre of North Korean civilians allegedly carried out by U.S. troops during the Korean War, the museum is known as a base for anti-America propaganda. The newspaper said that the South Korean authorities’ behavior is all the more disgusting and stressed that North-South relations should be abolished. It also said that North Korean defectors, who have sent the leaflets across the border, should be torn to death, calling them betrayers and the trash. Using that kind of foul language, the North lashes out at the South.

Internally, North Korea is in great economic difficulty, especially due to the COVID-19 pandemic. The nation needs to do something to deal with rising public discontent over the economic hardship and the standstill in the dialogue between North Korea and the U.S.

To allay negative public sentiment, the North seeks to divert people’s attention to something outside the country and let them express displeasure toward it. This process is part of building a cult of personality for its leader.

Kim Yo-jong, the powerful sister of North Korean leader Kim Jong-un, has gotten renewed attention. Her current title is the first vice director of the Organization and Guidance Department of the Workers’ Party. But on June 5, the United Front Department of the party warned of the closure of the inter-Korean joint liaison office in Gaeseong. It stressed that South Korea must remember this warning by first vice director Kim Yo-jong in charge of South Korean affairs. Key party figures have generally taken charge of South Korea-related issues. Given that, Kim has now been promoted to No.2, both in name and reality.

It is clear that she is leading projects related to South Korea. Many thought that way already in March when she blasted the South Korean presidential office. I imagine her official title of the vice director will be elevated sooner or later. North Korea may take some measures to show both inside and outside of the country that she is truly the No.2 figure in North Korea’s power structure.

The North will let her handle South Korean affairs for now. If she does a good job, the scope of her authority will be expanded. Leader Kim Jong-un may let his sister manage practical affairs while acting as regent himself, to divide their roles.

However, the legislation is prone to controversy over the freedom of expression guaranteed by the Constitution. Moreover, progressives and conservatives have widely differing views over this issue, so it is difficult for the National Assembly to pass such a bill.

Regarding the government’s swift reaction, some analysts say that it cares too much about North Korea’s criticism. But the Ministry of Unification in Seoul said on Wednesday that it is not appropriate to approach this matter emotionally.

Some people, especially those from the opposition parties, say that South Korea cannot enact a law just because of North Korea’s complaint. They criticize the government for being swayed by North Korea too easily.

In fact, the ruling Democratic Party raised the need for a bill banning the dispatch of anti-communist leaflets in 2014, when it was an opposition party. Now, the government calls for the legislation, citing the safety of residents in border areas. In addition, the government does not want this issue to affect its plans for inter-Korean economic cooperation negatively.

Yet, the legislation to ban flying leaflets may run counter to people’s right to freedom of expression. Therefore, the government has to find alternatives. It could persuade civic groups to refrain from such activity or slightly change the direction of their campaign.

But the North has not turned to these provocations in recent years, and I think it will also be difficult to do that down the road. North Korea needs to improve its relations with the U.S. and South Korea in order to overcome its serious economic difficulties. It will likely keep dialogue momentum with the U.S., in particular. So, the possibility of high-intensity provocations is rather low.

But North Korea may continue with low-intensity provocations to urge South Korea to block the distribution of anti-Pyongyang leaflets and resume the Gaeseong Industrial Park business and the Mt. Geumgang tour program.

Meanwhile, the U.S. State Department sent a warning message to North Korea on Tuesday, saying that it is disappointed in North Korea’s recent action to sever all communications lines with the South. Some experts say that the U.S. regards the action aimed at South Korea as pressure against the U.S.

U.S. President Donald Trump has dismissed North Korea’s short-range missile launches. But this time around, the State Department has used the word “disappointed.” It is seen as a warning that North Korea should not cross the line. Trump wants to manage the North Korean situation just the way it is until the presidential election. But Kim Jong-un, for his part, cannot wait forever. So he has sent messages to South Korea and launched low-intensity provocations as a sort of prelude. The U.S. government seems to be thinking that low-intensity provocations may lead to high-intensity ones, which it does not want to see, at least until the presidential election. Therefore, I think the U.S. has sent a warning message to North Korea at this point in time.

There are worries that inter-Korean relations may return to the state before April 2018, when South Korean President Moon Jae-in and North Korean leader Kim Jong-un held their first summit. It is necessary to analyze why North Korea has stoked tension yet again and what the next steps it will take.