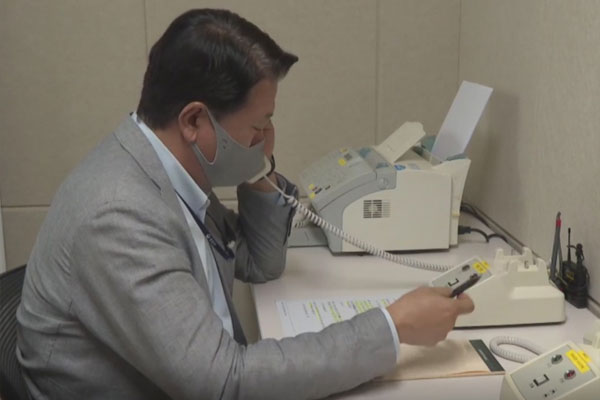 North Korea unilaterally cut off all communication lines with the South and blew up the joint liaison office in June last year in protest of anti-Pyongyang leaflets flown over by North Korean defector groups in the South. The severed lines were restored on July 27 this year, the 68th anniversary of the Korean War armistice agreement. But the North, which had been criticizing the South Korea-U.S. combined military exercises, again refused to answer on August 10. Some 50 days later, the hot lines were back on again.

Here is Cho Han-bum, senior researcher at the Korea Institute for National Unification, to explain the implications of the recent restoration of the cross-border communication lines.

In a policy speech during the Supreme People’s Assembly on September 29, North Korean leader Kim Jong-un said he would restore the cross-border communication lines to mend inter-Korean ties. He urged South Korea to withdraw its prejudice against the other side, double-dealing attitude and hostile policy before seeking to declare an end to the Korean War. The North Korean leader criticized the U.S., saying that Washington’s military threats and hostile policy toward Pyongyang remain unchanged even under the Biden administration.

Kim Jong-un also delivered a policy speech at the Supreme People’s Assembly in April 2019, about two months after the breakdown of the Hanoi summit. At the time, he said his regime would take a new path if its negotiations with the U.S. fail, setting the year-end deadline on the negotiations. In the latest speech, he mentioned cooperation, although it was limited to inter-Korean relations. While the North criticized the U.S., it is well aware that inter-Korean relations cannot move forward without an improvement in North Korea-U.S. relations. Pyongyang hopes that it will hold negotiations with the U.S. through cooperation with South Korea and that Seoul will facilitate the process. North Korea urged the South to drop its double standards and hostile policy, which is seen as a reference to the South Korea-U.S. military exercises. But Seoul and Washington have no plans to hold the drills until next March. Moreover, the Beijing Winter Olympics will be held next February. So, North Korea has enough time for talks. While the North set some preconditions, it is basically pursuing negotiations.

An anti-aircraft missile is a surface-to-air missile system, which is commonly tested in many countries. North Korea argues that its normal activities of strengthening defense capabilities should not be denounced, as it maintains a moratorium on nuclear tests and long-range missile launches. That is, the North claims that it has never crossed the red line. The U.N., on the other hand, is wary of Pyongyang’s test-firing of short-range projectiles, which might be used as a means of carrying tactical nuclear weapons. North Korea resorts to a show of force, not crossing the red line, to put some pressure on the U.S. under the pretext of bolstering its defense capabilities.

During the Supreme People’s Assembly in North Korea last week, many members of the State Affairs Commission were replaced. Headed by leader Kim Jong-un, the commission is North Korea’s highest decision-making body. During the latest assembly session, Kim Jong-un’s sister Kim Yo-jong, who holds the post of the vice department director of the Workers’ Party’s Central Committee, became the member of the commission. Premier Kim Tok-hun was promoted to the vice chairman of the commission, while First Vice Foreign Minister Choe Sun-hui, who has led the country’s policy toward the U.S., was removed from the commission.

The appointment of the North Korean Cabinet Premier as the vice chairman of the State Affairs Commission shows that the country will empower the Cabinet in order to revive the economy.

Kim Yo-jong’s entry and the removal of Choe Sun-hui from the commission certainly merit attention. Kim’s promotion to the commission member shows that her official status has risen even further, although she has already been considered the de facto No.2 figure in the regime. She has already deeply involved in inter-Korean ties and North Korea-U.S. relations, controlling the agencies in charge. In line with her elevated status, Choe was naturally eliminated from the commission. Kim Yo-jong may possibly wield even greater power when dealing with relations with South Korea and the U.S. down the road.

Speaking of North Korea-U.S. relations, the Biden government says it supports inter-Korean talks and stresses unconditional dialogue. The North and the U.S. will likely remain at odds with each other for the time being.

In a broader context, North Korea is shifting to a negotiation phase from a confrontational one that has lasted since the Hanoi summit. The North may hold working-level talks with South Korea, a summit with South Korea and then a summit with the U.S.  While focusing on negotiations, North Korea will still continue to test-fire short-range projectiles or others in a bid to strengthen defense capabilities and advance weapons technology. In doing so, it will pressure the U.S., still not crossing the red line, and seek dialogue at the same time.

For Chinese President Xi Jinping, it is absolutely necessary to host the Beijing Winter Games successfully in order to claim a third term in power. For that purpose, he focuses on the stable management of the Korean Peninsula. All the four countries—the two Koreas, the U.S. and China—do not want regional diplomacy from aggravating. Therefore, the negotiation mode will last in the region, at least for some time.

On this divided Korean Peninsula, there are both expectations for better inter-Korean relations and tensions surrounding North Korea’s additional show of force. The recent restoration of inter-Korean communication lines should hopefully lead to peace in the region.