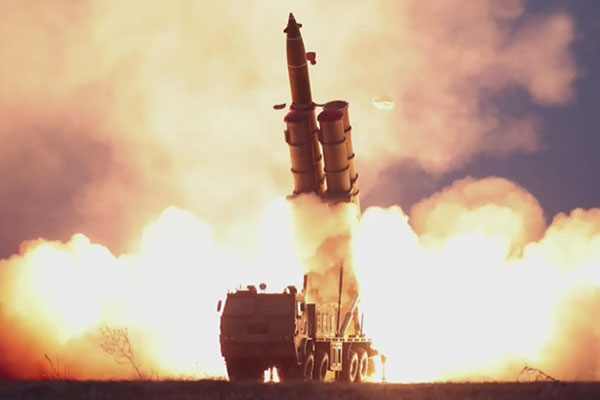 North Korea fired multiple projectiles toward the East Sea from the Sondok area in South Hamgyeong Province in the country’s northeastern region on Monday. It is Pyongyang’s second missile launch this year and came a week after it fired projectiles from what it called a super-large multiple rocket launcher in the Wonsan area on March 2. North Korean media reported that leader Kim Jong-un supervised the artillery strike exercise. For South Korea, the test came as a surprise since it came just five days after the North Korean leader sent a letter to South Korean President Moon Jae-in.

Here’s political commentator Kim Hong-guk to give his analysis of what lies behind North Korea’s successive provocations.

North Korea launched projectiles on March 2nd and again on March 9th. During that period, North Korean leader Kim Jong-un’s sister Kim Yo-jong severely criticized the presidential office in Seoul, while the leader sent a letter to the South Korean president. It seems the North is seeking a two-track approach of sending a warning to the South Korean government, but also communicating with the president. At the same time, I would assume the test had the purpose of both advancing its weapons system and strengthening internal unity, amid a deadlock in its nuclear negotiations with the U.S.

South Korea’s Joint Chiefs of Staff mentioned the possibility that the North launched the projectiles using its super-large multiple rocket launcher system, stating that they traveled up to 200 kilometers to reach an altitude of 50 kilometers.

North Korea tested super-large multiple rocket launchers four times last year and again last week. During the first test on August 24 last year, the firing interval of projectiles was 17 minutes. It was 19 minutes for the second test on September 10, three minutes on October 31 and 30 seconds on November 28. During last week’s firing, the projectiles had a 20-second gap, meaning that the North has boosted capabilities of its rocket launcher by shortening the interval. During the test early this week, the first two projectiles were also launched 20 seconds apart.

The South Korean military authorities assume that the three projectiles were fired from a super-large multiple rocket launcher. If it is forward-deployed, with a maximum range of over 400 kilometers, the projectiles could put both the South Korean air base in Cheongju and the THAAD base in Seongju within striking range. THAAD refers to the U.S. Terminal High Altitude Area Defense anti-missile system.

Another focus of attention is whether North Korea’s latest test was successful. The firing interval has been reduced to 20 seconds, indicating that North Korea’s weapons performance is improving. Experts are raising the need to strengthen South Korea’s three-axis defense system to counter the intensifying threats from North Korean weapons.

In regards to Pyongyang’s projectile launches on Monday, the presidential office in South Korea said that the firing would not be conducive to peace efforts on the Korean Peninsula. After the North’s similar launch last week, the office immediately convened an emergency meeting of relevant ministers and expressed strong regret over North Korea’s action that stokes military tension. It also demanded that the North stop such action, which will not helpful for easing military tension on the peninsula. But this week, the presidential office stopped short of using the expressions “strong regret” and “demand stop” that might provoke North Korea. In other words, South Korea has softened their language in regard to the North’s provocation.

We have to note that Chairman Kim has sent a personal letter to President Moon to deliver a message that the two Koreas should understand each other’s situation and cooperate. Moon has also sent a reply to Kim. It is hard to expect any improvement in North Korea-U.S. relations for now, as the U.S. is in the presidential election race mode. In this situation, South Korea seems to have considered the possibility of communication between the leaders of the two Koreas and the need to maintain mutual trust. Also, Seoul wants to prevent Pyongyang from making a habit on resorting to weapons development and provocations. I think that’s why South Korea has toned down its comments on the North’s latest action.

Kim’s letter to Moon confused many analysts here, as it came just a day after his sister lashed out at the South Korean presidential office. Hearing the news about her raw criticism, analysts believed that cross-border ties reached their lowest point.

But the following day, the North Korean leader sent a letter, in which he expressed concerns about the COVID-19 outbreak in South Korea.

In her disturbingly titled statement on March 3, Kim Yo-jong used harsh expressions, calling the South Korean presidential office “mentally-challenged” and “a dog loudly barking out of fear.” But the next day, leader Kim Jong-un sent a letter to the South Korean president to express condolences to South Korean people who fight the new coronavirus and wished President Moon and other South Koreans good health. Kim’s letter shows a stark contrast to his sister’s strongly-worded statement the previous day as well as the North’s provocation. I think we should focus more on the letter, as it contains the view of the top leader of North Korea. Still, there are hardliners in the North, like his sister, who take a hawkish stance toward South Korea. This reflects the current state of inter-Korean relations.

Kim Jong-un’s letter came on the heels of his sister’s statement. Some speculate that such a rare, abrupt about-face was carefully planned. That is, the leader and his sister played their own roles of consoling the president and people in South Korea and criticizing the presidential office and the government, respectively. Commentator Kim Hong-guk is echoing this view.

It appears that North Korea is taking a two-way approach. At present, the North has little to gain through its typical brinkmanship tactic that it has used in the past. To manage the domestic situation in a more stable way, the North finds it necessary to seek cooperation with South Korea, while pressuring it at the same time. I think North Korea has the intention of cooperating with the South for joint programs such as the Gaeseong industrial part project and the Mt. Geumgang tour program.

Regarding Kim Yo-jong’s statement, some analysts predicted that it would be difficult to expect an improvement in South-North relations. On the other hand, others expected Kim Jong-un’s letter would provide momentum to restore the cross-border ties. Amid those mixed views, another provocation made by North Korea indicates that it will never be easy to deal with inter-Korean relations.

Watching North Korea’s missile provocation, strong criticism, warm letter and other provocations, the South Korean government is growing anxious about how to handle relations with its northern neighbor. It is necessary to analyze North Korea’s ambivalent attitude from a long-term perspective.

South Korea, too, is expected to adopt a two-track policy when dealing with the North. The South must devise plans carefully, rather than unnecessarily come into conflict with the North. First, South Korea should make diplomatic efforts by cooperating with its allies including the U.S. to encourage North Korea to implement denuclearization and open up its society. It also needs to propose inter-Korean military talks to discuss North Korea’s regular military drills and its short-range projectile launches. In the process, the South should discourage the North from launching provocations, but instead induce it to change its attitude. On the economic front, the South also needs to carry out joint projects and private exchanges with the North more actively.

In brief, Seoul should respond firmly to any provocations from Pyongyang, while making stronger efforts to persuade North Korea to walk the path of openness and co-existence.

Many experts believe that the letter exchanges between the leaders of the two Koreas have provided a breakthrough for bilateral cooperation, though only in a small way. During the past week, we’ve seen sudden changes in inter-Korean ties, which have been stalled since the North Korea-U.S. summit ended without an agreement in Hanoi in February of last year.

It is necessary for the South Korean government to respond properly to Pyongyang’s two-pronged strategy and adjust its North Korea policy flexibly.