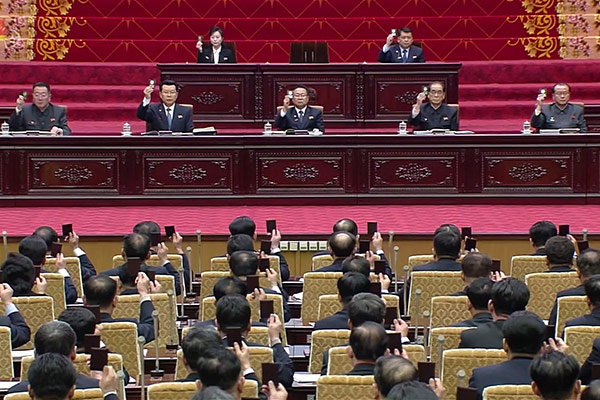 North Korea has convened the Supreme People’s Assembly, which is equivalent to South Korea’s National Assembly. According to the North’s official Korean Central News Agency, the 14th Supreme People’s Assembly gathered for a third session. It was held at the Mansudae Assembly Hall in Pyongyang on April 12 and parliamentary presidium president Choe Ryong-hae chaired the meeting. Despite the global spread of COVID-19, the session was attended by some 680 members. But it is reported that leader Kim Jong-un was absent.

The session had initially been scheduled to take place on April 10 but was delayed without explanation. Interpretations vary as to why the session was postponed. Here is political commentator Lee Jong-hoon to explain.

According to Seoul-based Daily NK, which provides news about North Korea, the postponement of North Korea’s recent parliamentary meeting has to do with the COVID-19 epidemic. It is reported that tests were conducted on all members who gathered in Pyongyang and that it turned out that seven had a fever, so the North hastily delayed the session. Meanwhile, the Unification Ministry in Seoul explains that the schedule might be adjusted due to some unspecified political events in the North. In another interpretation, a policy change may have been made in regards to North Korea’s foreign policy. This was done during a Politburo meeting of the Workers’ Party presided over by leader Kim Jong-un. It is speculated that the parliamentary session was put off because the North wanted to hold it after the Politburo meeting.

The Politburo meeting was held on April 11, one day earlier than the Supreme People’s Assembly, and anti-virus efforts topped the agenda of the meeting of the decision-making body. The meeting called attention to leader Kim Jong-un’s role and leadership, at a time when the prolonged COVID-19 outbreak makes it increasingly important for North Korea to manage its economic situation.

The meeting adopted a joint resolution calling for taking more thorough state measures to protect life and safety of people from the great worldwide epidemic disease. In the resolution, North Korea admits that it is impossible to resolve the danger of the virus infection anytime soon. Apparently, the reclusive country is faced with great difficulty internally. So it is focusing more on measures to ease public jitters over the virus and strengthen countermeasures against it. The meeting of the Political Bureau makes important decisions, including those related to the nation’s foreign policy.

This year, the meeting was chaired by the leader himself before the parliamentary session took place.

What grabs our attention is that the leader’s younger sister Kim Yo-jong was reinstated to an alternate member of the Politburo during the meeting. She had been dismissed from the post last year after the breakdown of the North Korea-U.S. summit in Hanoi. But now, on top of the reinstatement, she has another title of the first vice director of the Workers’ Party and even plays a role as a spokesperson for the leader. It seems that her status and influence have been reinforced even further.

Some believe that she had been removed from the position last year to take responsibility for the collapse of the Hanoi summit. But it appears that her status has been elevated further in recent months. This year, she slammed the South Korean presidential office in a statement released in her own name. She also disclosed the fact that U.S. President Donald Trump had sent a personal letter to her brother. Before last week’s Politburo meeting, she accompanied her brother to an air base for an inspection tour. Analysts assume that she is expanding her presence in all areas, including the military. Now that she has joined the powerful Politburo, she is believed to have solidified her status as the nation’s second-in-command.

Some topics discussed at the Politburo meeting were decided during the Supreme People’s Assembly. Many had wondered whether Kim Jong-un would attend the parliamentary session, amid growing fears of the spread of COVID-19. As he was present at the Politburo meeting and was not at next day’s session, some analysts say the status of the Supreme People’s Assembly has been reduced, compared to the past.

I imagine North Korea has built a personality cult of its leader in earnest since the second half of last year. Kim Jong-un is raising his status to that of his grandfather Kim Il-sung by underlining the so-called Baekdu bloodline that helps strengthen the legitimacy of the Kim family’s three-generation power transfer. In the process, he and his sister have divided roles in governing the nation. While Kim Jong-un’s status has been elevated to an absolute level, his sister is in charge of practical affairs. In doing so, the two siblings rule the country together. The leader is not a member of the Supreme Peoples’ Assembly, and this can be understood in this context. That is, Kim is sure that the parliamentary session will go smoothly without his management.

As expected from the leader’s absence, the parliamentary meeting did not make any meaningful decision that could be interpreted as a policy shift. It didn’t announce a particular message toward the outside world, either.

But it is worth noting that the parliament approved a 7.4 percent increase in spending on public health this year. It is a significant hike, considering that expenditures for national defense only rose 1 percent from last year to account for 15.9 percent of the total budget. North Korea decided to devote 47.8 percent of the annual budget to economic construction projects, up 6.2 percent from last year. Overall, its budget is focused on stabilizing the public livelihood and overcoming economic difficulties.

The budget plan calls for more expenditures on healthcare. North Korea plans to rebuild or modernize factories of pharmaceutical products and medical equipment. It is committed to completing the Pyongyang General Hospital, in which the leader showed great interest.

It also stresses the importance of revitalizing the economy amid the deteriorating economic conditions due to the virus. In reality, however, there are very few measures to actually do so.

In this situation, North Korea’s only option is “self-reliance” or “self-rehabilitation.” The North says that it will strictly manage the development of underground resources and protect fisheries resources. Through these resources, North Korea seeks to secure necessary funds and resolve the food problem as well.

The assembly session also dealt with the personnel affairs issue. Foreign Minister Ri Son-gwon and vice chairman of the Workers’ Party’s Central Committee Kim Hyong-jun were elected as members of the State Affairs Commission. The two officials are in charge of diplomatic strategies at the Cabinet and at the party, respectively. Their predecessors, Ri Yong-ho and Ri Su-yong, were removed from the commission. The rise of hardliner Ri Son-gwon, who has little experience in foreign affairs, may indicate that North Korea could unveil a new diplomatic policy when dealing with its relations with the U.S.

North Korea has dismissed officials who led negotiations with the U.S. and brought hardliners involving weapons development to the forefront instead. The key figure is Ri Son-gwon. The military hardliner has now secured the seat of the State Affairs Commission. It seems North Korea is using him in a similar way Trump appointed John Bolton as his national security adviser. Bolton was the representative hawk within the Trump administration. His harsh rhetoric was often later adjusted by Trump or Secretary of State Mike Pompeo. That’s how the U.S. dealt with North Korea at bilateral negotiations. I guess the North Korean leader has a similar picture in mind.

North Korea’s new diplomatic lineup is drawing attention all the more because North Korea-U.S. dialogue remains mired in a long stalemate. Pyongyang has recently created a new post of Foreign Ministry director in charge of negotiations with the U.S. in an apparent effort to address the issue.

We’ll have to wait and see how North Korea will tighten internal controls and handle foreign affairs in the future, based on the decisions it made during the latest Politburo meeting and the parliamentary session.