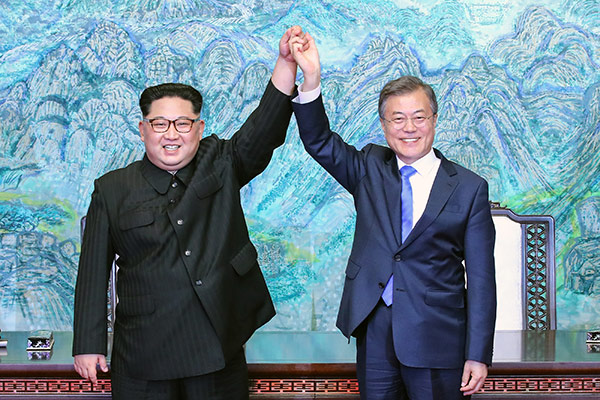 April 27 will mark the second anniversary of the inter-Korean summit between South Korean President Moon Jae-in and North Korean leader Kim Jong-un at the truce village of Panmunjom. Many will still recall the memorable scene of the two leaders holding each other’s hands at the military demarcation line two years ago. At the end of the summit, they signed the Panmunjom Declaration calling for new inter-Korean relations and regional peace. Here is political commentator Kim Hong-guk to explain the Panmunjom Declaration in more detail.

The Panmunjom Declaration for Peace, Prosperity and Reunification of the Korean Peninsula has three main points. First, the leaders of the two Koreas agreed to pursue the complete denuclearization of the Korean Peninsula. They seek to make an official declaration of the end of the Korean War within the year. Second, they promised to push for trilateral meetings involving the two Koreas and the U.S. with the purpose of turning the armistice into a peace treaty and establishing a permanent peace regime. Third, they saw eye to eye on the need for inter-Korean economic cooperation.

Unfortunately, many of the agreements have failed to make progress, due to conflict between North Korea and the U.S.  Still, the leaders of South and North Korea joined hands for the sake of peace on their divided peninsula. In this sense, I attach great significance to the summit and the Panmunjom Declaration.

Most significantly, the declaration stipulated North Korea’s commitment to complete denuclearization. However, the North Korean nuclear issue has made little headway over the past two years. Cross-border cooperation projects between South and North Korea have also failed to produce results, contrary to prior expectations and the Seoul government’s strong commitment.

North Korea-U.S. relations have remained highly volatile, as the two sides have been at odds over various issues. Worse yet, North Korea’s provocations continued. Under these circumstances, Pyongyang vowed to build a self-reliant economy without assistance from the U.S. or South Korea. The North is extremely wary of depending on South Korea, in particular. It is little wonder bilateral relations have been at a stalemate. But in the wake of the global outbreak of COVID-19, North Korea must seek a change. On the occasion of the second anniversary of the Panmunjom Declaration, I think the two Koreas need to find an exit out of such a stalemate.

Now that the ruling bloc has secured over 180 National Assembly seats, the government has the power to lead state affairs and push ahead with the president’s agenda. I guess South Korea will push for healthcare cooperation with the North first. As far as inter-Korean cooperation is concerned, humanitarian or economic issues are easier to approach than military or political ones. During his speech marking the March 1 Independence Movement Day, President Moon proposed cross-border cooperation in healthcare and quarantine. I imagine North Korea is in desperate need of help from the South. So the two sides may actually implement some quarantine cooperation programs. Bilateral cooperation will then expand to the economic area as well as personnel and material exchanges.

The Unification Ministry in Seoul said on Monday that it would again promote the project to connect a cross-border railway. The project in question is the restoration of the South Korean railway section between Gangneung and Jejin on the Donghae Northern Line on the east coast. The project has failed to move forward so far, due to budget issues. But now, the government is determined to resolve the budget problem by designating it as an inter-Korean exchange and cooperation program.

Although Pyongyang has warned of breaking its ties with Seoul this year, the South Korean government is seeking to find a breakthrough in bilateral relations. This is on the back of the ruling party’s sweeping victory in obtaining parliamentary seats and the second anniversary of the Panmunjom Declaration.

The government plans to hold an event marking the decision to connect the Donghae Northern Line on April 27. The line stretches over 110 kilometers from Gangneung to Jejin along the east coast. If the railway construction project is recognized as an inter-Korean cooperation program, it will be exempt from a preliminary feasibility study. Starting with the restoration of the South Korean section of the eastern railway, South Korea hopes to reconnect the western Gyeongui Line as well and expand cooperation programs into tourism and other economic areas. North Korea has already recognized the importance of reconnecting the severed railroads. So, the two Koreas will carry out the railway project without difficulty once their relations improve to some extent.

North Korea’s positive response will be essential for any cross-border project. But the North has so far remained indifferent to joint programs proposed by South Korea. Therefore, it is uncertain if inter-Korean cooperation programs pushed by the Seoul government will go smoothly. The COVID-19 epidemic is another factor that may influence North Korea’s attitude. Due to its poor quarantine system, North Korea may find it difficult to open its door to the outside world until the virus is contained completely.

The situation in North Korea is quite unpredictable. The local economy is in bad shape, as its trade with China has been suspended for about three months due to the COVID-19 pandemic. On top of the highly contagious disease, North Korea has already been struggling with prolonged international sanctions.

In the U.S., a new administration will be inaugurated in January next year. Whether Trump is reelected or not, the U.S. government will establish a new North Korea policy in a year or so. During that period, North Korea will badly need cooperation with the South. Having this situation in mind, Seoul must carefully watch North Korea’s movement and make proactive efforts. This is to induce the North to change through bilateral cooperation. I think North Korea will accept some of Seoul’s proposals in the process.

On April 18, leaders of South Korea and the U.S. reaffirmed the principle of providing North Korea with humanitarian aid related to COVID-19. Commentator Kim talks about what the South Korean government should do to find momentum for dialogue.

South Korea must encourage the North to participate in inter-Korean cooperation programs through humanitarian assistance and private-level exchanges. Of course, it needs to employ a two-track strategy of engaging North Korea and pressure it in the case of its provocations. As the North is facing difficulties now, the South needs to help out its northern neighbor on humanitarian grounds and show new paths that both sides can walk together. If South Korea manages to elicit a positive response from the North in the process, inter-Korean relations will face another turning point. President Moon may hold a fresh round of an inter-Korean summit, based on strong public support. He needs to lead the process of finding a political compromise on the nuclear issue. In this respect, it is important for South Korea to consistently propose humanitarian aid and economic cooperation to the North.

Meanwhile, speculation is rampant that North Korean leader Kim Jong-un may be in grave danger after surgery. But the presidential office in South Korea says that there have been no unusual signs to suggest that the North Korean leader’s health was failing.

During his speech commemorating the second anniversary of the Panmunjom Declaration on April 27, Moon may possibly make some proposals. This may include Seoul’s provision of quarantine supplies to North Korea. We’ll have to wait and see what message Moon will announce next week.