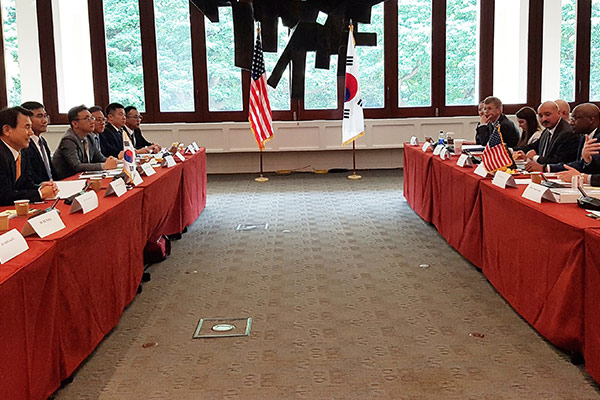 There can be no free riders to our shared security. Regardless of geographic location, size or population all must do their part to deter war and defend the alliance...

U.S. Defense Secretary Mark Esper has recently said that there can be no free riders when it comes to common defense.

While his remarks were largely referring to members of the North Atlantic Treaty Organization or NATO, the message is in line with Washington’s growing pressure on its allies to increase their share of defense costs. It is therefore expected to affect the ongoing defense cost-sharing negotiations between South Korea and the U.S. Esper’s comments may also impact discussions regarding the scope of their combined crisis management operations. Here is Moon Sung-mook, a senior researcher at the Korea Research Institute for National Strategy, with more.

Washington has reportedly asked Seoul to pay 5 billion US dollars next year for the maintenance of U.S. troops stationed in South Korea. That’s a fivefold increase from this year. It’s unclear exactly how much the U.S. is demanding. But obviously, it is requesting South Korea to pay much more than its current contribution.

South Korea has so far paid partial costs for the U.S. troop presence in the country, including those for Korean workers hired by the U.S. Forces Korea, the construction of military facilities and other logistics. Now, the U.S. seems to be demanding that South Korea cover the costs of conducting combined military drills, deploying U.S. strategic assets on the Korean Peninsula and other expenses as well. But Seoul says that the request goes beyond the boundaries of the Status of Forces Agreement, which is referred to as SOFA, between the two countries.

South Korea thinks it will inevitably have to increase its defense costs to some extent but the increase should be at an appropriate level in order to be accepted by the public. In the process of fine-tuning the differences between the two sides, the burden-sharing talks will likely entail a rough time.

South Korea and the U.S. held their second round of defense cost-sharing talks in Honolulu on October 23rd and 24th to renew the bilateral Special Measures Agreement that would determine the amount Seoul will pay for the upkeep of American troops in Korea next year.

According to the negotiations teams on Tuesday, the Korean government proposed a slight increase from this year’s payment of 1.04 trillion won, under the principle of a “fair and reasonable” share. However, officials in Washington, including U.S. President Donald Trump, are demanding a drastic hike in Seoul’s contribution next year.

Trump has repeatedly made remarks about cost-sharing that were rather shocking to South Korea. Based on his America-first policy, the U.S. president believes that there is no reason for America to pay defense costs for its allies and that South Korea, Japan and Germany, which he thinks are rich countries, should increase their share sharply. This attitude is reflected in the ongoing burden-sharing negotiations between South Korea and the U.S. The deal is currently being kept as a one-year contract. Washington wanted to renew it on a yearly basis, in an apparent bid to raise Seoul’s share every year.

In a move to pressure the Korean government, Trump has said that South Korea, a wealthy country, has already agreed on a substantial raise in its contribution. Defense Secretary Mark Esper’s recent remarks about “no free riders” can be understood in the same context. The two countries share the goal of striking a deal within the year. But for South Korea, the prospects for a desired agreement are not very bright.

In the meantime, the two allies have started discussions on their respective new roles when dealing with contingencies after the transfer of wartime operational control or OPCON from the U.S. to South Korea.

South Korea and the U.S. have reportedly begun discussing a possible revision to a joint crisis management manual, which sets guidelines on the roles of each side and combined response when dealing with contingencies on the Korean Peninsula. There are reports that Washington has proposed revising the classified document to include “U.S. contingencies” as well.

As part of preparations for the planned OPCON transfer, the U.S. has reportedly proposed expanding the scope of combined crisis management operations to include not only contingencies on the Korean Peninsula, but also U.S. contingencies. This proposal is raising concerns in Korea.

A revision to include cases that the U.S. considers threats to its own national security, if realized, could establish grounds for South Korea to send its troops to regions beyond the Asia-Pacific, including the South China Sea, the Strait of Hormuz and the Indian Ocean, to jointly deal with U.S. contingencies.

The crisis management manual is based on the mutual defense treaty between South Korea and the U.S. Article 3 of the treaty clearly sets the Pacific region as the scope of their combined operations. If the manual is revised, as suggested by the U.S., to expand the scope into regions outside the Pacific area, the treaty itself should also be revised.

The proposal is in line with Trump’s consistent demand for America’s allies to play a greater role. It could be interpreted as Washington’s demand that South Korea, as an ally, make practical contributions to the national security of the U.S., in exchange for retaking wartime operational control.

In an effort to quell the controversy over a revision to the crisis management manual, the Defense Ministry in Seoul has dismissed the possibility of the frequent deployment of troops overseas.

Still, it is unquestionable that the Seoul government has a grave task to content with.

Based on the solid bilateral alliance, Seoul should fully discuss this matter with Washington and convince the U.S. that they should be extremely careful about including “U.S. contingencies.” Even if the discussions do not proceed as the U.S. wants, Washington will not take drastic action like withdrawing its troops from South Korea or breaking the bilateral alliance, in consideration of the need for the alliance and its own national interests. South Korea needs to clarify its position that it will continue to cherish the alliance and share the defense costs, so that the two sides will not make emotional decisions against each other.

The U.S. is demanding that South Korea play a larger role in its defense, stressing a fair contribution from allies. Amid growing concerns that Washington’s excessive demands may damage its decades-long alliance with South Korea, it will be important for the two sides to find a sensible compromise.