Speculation about Third Trump-Kim Summit within the Year 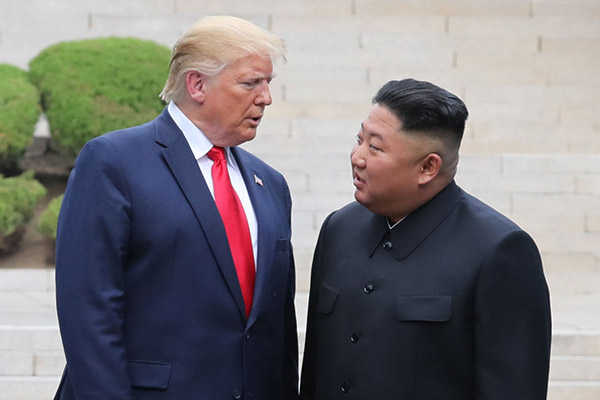 South Korea’s National Intelligence Service said on Monday that North Korea and the U.S. may hold a new round of working-level negotiations within this month or early next month at the latest, as North Korean leader Kim Jong-un is apparently pushing for a third summit with U.S. President Donald Trump within this year. Today, we’ll discuss the possibility of another Trump-Kim summit taking place with Oh Gyeong-seop, a researcher at the Korea Institute for National Unification.

Although the National Intelligence Service did not cite specific reasons for its forecast about a third North Korea-U.S. summit, its prediction is based on the following two factors. First, the North and the U.S. confirmed each other’s position through working-level contact in Stockholm on October 5th, and it’s time for the two sides to meet again. Second, Kim Jong-un set a deadline—the end of this calendar year—for denuclearization negotiations with the U.S.   As a result, the spy agency is assuming that another North Korea-U.S. summit may take place before the year ends.

In his policy speech at the Supreme People’s Assembly in April, Kim Jong-un said that he would wait for the U.S. to make a bold decision until the end of the year. Many diplomatic experts predict that North Korea may push for additional dialogue with the U.S. to meet the year-end deadline set by Kim. The National Intelligence Service in Seoul is echoing this view.

Now, attention turns to whether Pyongyang and Washington may provide momentum to resume working-level talks during a nuclear nonproliferation conference that is being held in Moscow from Thursday to Saturday. For the so-called Track 1.5 semi-official forum, North Korea has sent Jo Chol-su, director-general of the North American department at Pyongyang’s Foreign Ministry. Meanwhile, U.S. Special Envoy for North Korea Mark Lambert is also attending the event.

As the successor to Kwon Jong-gun(권정근), the former head of the North Korean Foreign Ministry’s North American department, Jo plays an important role in nuclear negotiations with the U.S.  There is a chance that this North Korean official could make contact or hold discussions with Lambert on the sidelines of the nuclear nonproliferation conference in Moscow. To make that happen, however, the two sides first have to share the need to resume working-level denuclearization talks. But for now, there are no particular reports about their working-level contact. It is unclear whether Jo and Lambert will meet, and even if they do, it is also uncertain how far their dialogue will proceed.

Along with First Vice Foreign Minister Choe Son-hui, Jo is considered a key figure in North Korea’s foreign affairs ministry. Lambert participated in the preliminary discussions with his North Korean counterpart Kwon Jong-gun in Stockholm in early October. If Jo and Lambert meet in Moscow this week, it will be the first gathering of North Korean and U.S. officials involved in nuclear negotiations since the breakdown of the Stockholm talks. The meeting, if realized, may provide a clue as to how denuclearization talks will unfold in the future.

But there is also a possibility that North Korea may refuse to come to the dialogue table and will resort to even stronger provocations.

North Korea has launched four new short-range weapons systems over the last six months. On May 4th, the North tested a tactical guided weapon that is known as the North Korean version of the Russian-made Iskander missile. In May and August, it tested a large-caliber multiple-launch guided rocket system. On August 10th and 16th, it fired tactical surface-to-surface missiles. Most recently, on October 31st, the North fired two super-large multiple rocket launchers. In addition to these tactical guided weapons, Pyongyang also test-fired a submarine-launched ballistic missile on October 2nd.

Amid a stalemate in nuclear negotiations, the series of missile launches may put great pressure on the U.S.  Pyongyang may carry out further provocations in a bid to elicit more concessions from Washington.

North Korea has fired projectiles on 12 different occasions this year alone. The provocations are largely interpreted as Pyongyang’s strategy to urge Washington to change its attitude before the year’s end. With the deadline approaching, there are concerns over additional provocations from Pyongyang. Kim Jong-un also seems to be considering visiting China in a move designed to place more pressure on the U.S.

It is very important and urgent for North Korea to get sanctions relief by all means. To this end, it is crucial to win support from China. North Korea is greatly interested in developing the Kalma area and Mt. Geumgang as international tourist destinations. For North Korea, attracting Chinese tourists is one of the few ways to earn foreign currency without being subject to U.N. sanctions. For various reasons, Pyongyang needs to closely cooperate with Beijing.  As a result, we cannot rule out the possibility that Kim Jong-un may visit China within this year. North Korea may choose to delay the nuclear negotiations with the U.S. and take action aimed at adding greater pressure to Washington. In the meantime, closer relations between North Korea and China will negatively affect North Korea-U.S. ties.

After considering the factors behind Kim Jong-un’s initial visits to China, which took place before he met Trump for the first and second summits, the National Intelligence Service said on Monday that the North Korean leader may visit China again before the end of the year.

Since the North is pressuring the U.S. in various ways, it is still hard to predict whether a third Trump-Kim summit will be held before the year ends.

For a third North Korea-U.S. summit to materialize, the two sides should first finalize discussion topics and reach some sort of agreement through working-level contact. With only less than two months left before the year’s end, it is a pretty challenging task.

Trump is in a very tricky political situation domestically, so he is unlikely to rush to resolve the North Korean nuclear issue within the year. North Korea, for its part, may strengthen its relations with China to dilute the international sanctions in place and make various diplomatic efforts to draw concessions from the U.S. while stalling for time.  Although the North Korean leader set the year-end deadline, it will be difficult for the North to get what it wants within the year. I think there is little likelihood of another Trump-Kim summit occurring in 2019.

Since the collapse of their working-level talks in Stockholm, both the North and the U.S. have urged each other to offer an acceptable proposal. Amid the intense tug-of-war between the two sides, we’ll have to wait and see if the U.S. will come up with a new proposal and hold talks with the North before the year’s end.