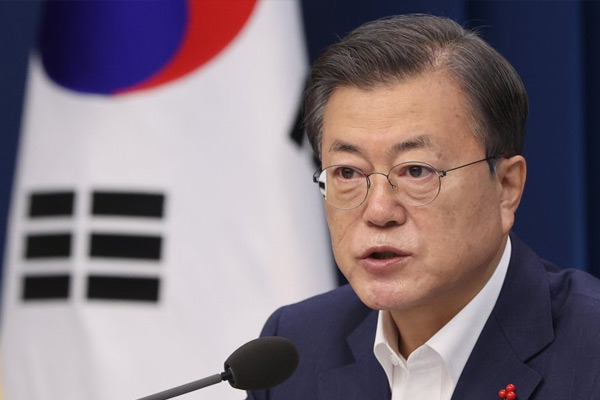 South Korean President Moon Jae-in has entered his fifth and effectively last year in office. In 2021, he is facing daunting tasks ahead, including solving the COVID-19 situation and defusing the confrontation between the presidential office and the prosecution. Promoting the peace process on the Korean Peninsula is another challenging mission amid the rapidly changing global politics.

South Korean Unification Minister Lee In-young said on Monday that a major breakthrough could be made in inter-Korean relations this year. Here is political commentator Lee Jong-hoon to explain what this means.

Unification Minister Lee said that in a superhero film Thor, an event known as the Convergence occurs when all nine realms are placed into alignment to cause the strong spirit of the universe to focus on Thor. Citing the movie, he said that he believes a great transition like this or a major breakthrough focused on peace on the Korean Peninsula is ready to begin. I guess he expressed his hopes for a dramatic improvement in inter-Korean relations this year.

The South Korean government will likely to continue with its policy of appeasement with North Korea this year. The Unification Minister said that North Korea was expecting the South to send a more positive message of dialogue and cooperation. He added that if the two Koreas manage to take a first step toward bilateral cooperation properly in the first half of the year, the Korean Peninsula peace process will be on track in the second half. Judging from his remarks, I imagine the government will work to produce some positive result in inter-Korean ties this year.

A report said on Monday that North Korea filed an application to get COVID-19 vaccines from an international organization. In fact, the South Korean government has offered to provide COVID-19 vaccines and treatments to North Korea several times, pinning hopes on inter-Korean cooperation in the field of medical and healthcare areas. However, North Korea has remained silent about the offer.

North Korea still claims to have zero confirmed cases of COVID-19. Yet, the country has reportedly sent an application to receive vaccines from an international vaccine alliance, while it has made no response to South Korean Unification Minister Lee In-young’s comments on Seoul’s possible vaccine aid for the North.

This means that North Korea has no intention of getting vaccines from South Korea, even if it may ask for a vaccine supply. I think North Korea wants something more than just vaccines, like the resumption of the suspended inter-Korean economic programs at least. North Korea’s lukewarm attitude toward South Korea’s vaccine proposal can be understood in this context.

North Korea has been faced with a triple whammy of international sanctions, damage from natural disasters last year and a prolonged border closure due to the pandemic. In this situation, North Korea is more likely to attempt to conduct economic exchanges with South Korea rather than get vaccine aid.

During the party congress that kicked off on Tuesday, North Korean leader Kim Jong-un admitted the failure to meet his country’s economic development goals. It has been confirmed that the economic situation in the North has worsened further, and some analysts say that the North may turn its eyes to economic assistance from its southern neighbor this year. In this vein, they speculate that North Korea may approach South Korea first rather than the U.S., which is busy preparing for a new government. But commentator Lee has a different opinion.

The North Korean leader’s remarks during this week’s party congress have drawn much attention. He acknowledged the economic failure of his country, saying that almost all areas fell a long way short of the goals of the five-year economic development plan.

He said that the key to breaking through the ongoing difficulties with utmost certainty and pace is strengthening the nation’s own power in all areas. I guess North Korea will struggle to survive on its own and it is therefore difficult for the North to improve its relations with the U.S. for the time being. In the same context, Pyongyang will likely maintain its current stance toward Seoul. North Korea seems to believe that it can mend ties with South Korea and get much more from the South only after an improvement in North Korea-U.S. relations.

So, when will Seoul and Pyongyang restore their relations this year? Early last month, the Korea Institute for National Unification predicted that around the Tokyo Olympics in July, or the period between May and September will be a golden time for restoring inter-Korean ties and reactivating the Korean Peninsula peace process. If North Korea does not launch a provocation around the South Korea-U.S. combined military exercises in March and April, and if the North becomes confident in quarantine after getting vaccine aid from China and Russia, the efforts to restore inter-Korean relations may gain traction.

It is doubtful that the Tokyo Olympics will be held as planned. Due to the abrupt spread of COVID-19 in the country, Japan has declared a state of emergency in some regions. So, we’ll have to wait and see how the situation may evolve. Even if the Olympics may take place, I’m skeptical that the sports event will play a decisive role in improving inter-Korean ties. Rather, I think it is more appropriate to consider the Biden government when predicting the time for an improvement in South-North relations. The Biden administration will probably go into full gear in summer after confirmation hearings. So, inter-Korean relations may see a change after that, that is, September or October.

There are no specifics about the Biden government’s policy toward North Korea, other than the prediction that it will prefer a bottom-up approach involving working-level negotiations.

It is still uncertain if Biden will take over the results of the North Korea-U.S. summits of the Trump years or if he will return to the Obama-era policy of “strategic patience.”

The Biden administration will be inaugurated this month but it will take time before it is in full operation. It will have to form working-level teams, figure out the situations and set the direction of its North Korea policy.

The new U.S. government is likely to inherit Obama’s North Korea policy, and it will be hard to expect any dramatic, surprise result that we saw during the years of the Trump administration. I guess North Korea and the U.S. will go through a lengthy negotiation process.

The Seoul government is thinking hard about how to handle the issue of an end-of-war declaration and inter-Korean healthcare cooperation.

South Korea should remember that it should not cross the line. President Moon called for the international community to support an official end to the Korean War during his U.N. speech. But if Seoul blindly sticks to the proposal, it will be difficult to seek understanding from the Biden administration. Trump might have made a surprise decision to agree on the proposal, but that’s not the case with Biden.

Also, the Biden government will find it hard to accept South Korea’s abrupt resumption of the inter-Korean joint programs such as the Mt. Geumgang tour project and the Gaeseong Industrial Park business. Rather, I think South Korea needs to find common ground with the Biden government little by little through partial economic cooperation or trade with North Korea.

Inter-Korean relations remained deadlocked throughout last year. In the year 2021, we hope the government will formulate a proper North Korea policy in consideration of ever-changing international affairs and find a major breakthrough in regional diplomacy that has been at a standstill since the North Korea- U.S. summit in Hanoi.