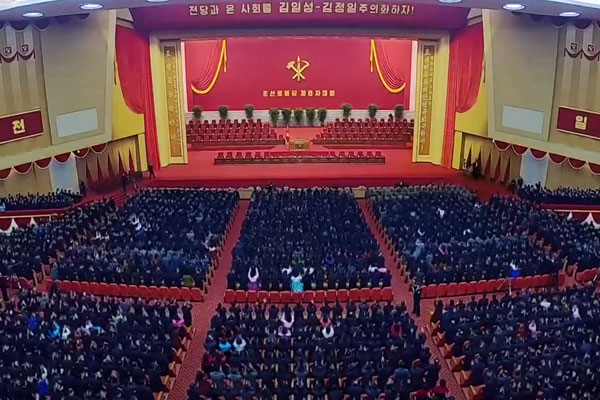 North Korea kicked off the eighth congress of the Workers’ Party on January 5, starting with leader Kim Jong-un’s admission of the failure of the nation’s economic policies overall. It was the first time for any top leader in North Korea to admit the failure of a state strategy that he had drafted himself at the nation’s biggest political event. During the congress, North Korea elected Kim as general secretary of the Workers’ Party in a move to further strengthen his grip on power. Here is Dr. Oh Gyeong-seob from the Korea Institute for National Unification to explain North Korea’s recent party congress in more detail.

One of the key topics of the party congress was how to tackle economic difficulties. Basically, North Korea seeks to keep its economy afloat through self-reliance, and it didn’t announce any drastic policy change.

In the military area, the country placed much emphasis on the need to develop the defense industry and boost its nuclear war deterrent.

Through the revision of party rules, North Korea restored the secretariat system and revived the title of general secretary of the Workers’ Party. What grabs our attention in a personnel reshuffle during the congress is the emergence of Jo Yong-won, who is now one of the members of the politburo presidium, as the key figure in the country’s power structure. Another surprising development is the exclusion of the leader’s powerful sister Kim Yo-jong from the list of alternate members of the party’s political bureau.

On the third day of the congress on January 7, it was reported that leader Kim Jong-un reviewed inter-Korean relations and announced the policy direction for foreign affairs. No details were released, though.

During the congress, Kim said that cross-border relations returned to the times before the Panmunjom Declaration of 2018, shifting the responsibility on to South Korea. He accused the South of bringing in advanced weapons and staging combined military exercises with the U.S. Still, he did leave room for better inter-Korean relations, saying that an improvement in bilateral ties depends entirely on South Korea’s attitude.

South Korea previously expressed hope to mend inter-Korean ties through quarantine cooperation, humanitarian aid and South Koreans’ individual tours to the North. But the North Korean leader said that it would be impossible to improve the relations through these inessential issues. As for more essential matters, he demanded that South Korea stop introducing high-tech military equipment and conducting the combined military exercises with the U.S. He also demanded that South Korea faithfully implement inter-Korean agreements. Otherwise, he said it would be difficult for inter-Korean relations to return to that spring of three years ago.

The remarks indicate that North Korea is very unlikely to work to improve relations with its southern neighbor. It is appropriate for the North to create a peaceful dialogue environment itself to improve inter-Korean ties. But Pyongyang is only putting the blame on Seoul.

During the party congress, Kim Jong-un sent a message to the U.S. as well, the first such message since Joe Biden won the presidential election in the U.S. in November last year. Kim said that the true nature of the U.S. and its North Korea policy would never change, whoever comes to power. In an apparent message toward Biden, Kim made it clear that the U.S. must drop its hostile policy toward North Korea first. It seems the North Korean leader was asking both the U.S. and South Korea to show some sincerity before engaging in any negotiations with the North.

Kim said that his country would approach the U.S. on the principle of “hard-line for hard-line, goodwill for goodwill.” He added that the North would focus its foreign policy on containing and subduing the U.S., its foremost principal enemy and the fundamental obstacle to the development of its revolution. What North Korea meant was that there would be little change in North Korea-U.S. relations unless the U.S. recognizes the North as a nuclear weapons state and lifts sanctions on the North. That is, Pyongyang will never yield to Washington’s demand for nuclear disarmament but will only boost its nuclear deterrent to directly confront the U.S. Kim’s remarks show that the prospects for North Korea-U.S. relations are not very bright.

Still, North Korea is unlikely to take a hard-line stance toward the incoming Biden administration first. Its message toward the U.S. during the congress is not considered offensive. It does not show any signs of future provocations, either. Analysts say that North Korea will refrain from high-intensity military action, such as an intercontinental ballistic missile or ICBM test, until the Biden government’s North Korea policy takes concrete shape.

But North Korea did stress that it would further strengthen its defense capabilities to deter military threats of the U.S. This means that the North will not wait for dialogue with the U.S. forever. North Korea seems to be warning that it could pose a military threat to the U.S. if it does not see a clear solution down the road.

Kim said that his country would improve the ability of ICBMs and develop hypersonic weapons. By developing ICBMs that would neutralize the missile defense system, North Korea seeks to equip itself with nuclear strike capabilities. He also mentioned the plan to develop a nuclear-powered submarine. North Korea seeks to confront the U.S.’s threats and ensure its survival through stronger defense and nuclear capabilities. The future of North Korea-U.S. relations may depend on how the new U.S. government will respond to North Korea’s attitude like this.

The personnel shakeup in the North Korean leadership during the party congress shows that the role of officials in charge of relations with the U.S. and with South Korea has been reduced. While North Korea revived the secretariat system, it removed the position of secretary of inter-Korean affairs—the post that had been maintained during the years of former leaders.

The political status of elite officials who played a key role in negotiating with the U.S. and South Korea has been weakened, probably because North Korea-U.S. dialogue has been stalled since their no-deal summit in Hanoi. Also, I guess negotiations with South Korea and the U.S. have become less important, as the North has officially vowed to bolster nuclear capabilities. Pyongyang seems to be sending this message to Seoul and Washington.

Meanwhile, in a New Year’s speech on Monday, South Korean President Moon Jae-in said that the South was willing to talk with the North anytime, anywhere, even in the non-face-to-face format.

However, he did not make a direct response to the North Korean leader’s recent demand that South Korea stop introducing high-tech weapons and carrying out joint military exercises with the U.S.

It is difficult to respond to Pyongyang’s request right now. The South Korean government may deal with those issues differently, depending on how the North Korean nuclear issue will unfold. South Korea also needs to discuss the matters with the U.S. The Seoul government is likely to continue making efforts to improve relations with North Korea, stressing its commitment to cross-border dialogue. At the same time, it needs to consider how to discourage North Korea from strengthening its nuclear capabilities and how to create a favorable environment for the North to enter nuclear negotiations with the U.S.

North Korea’s party congress ended without setting specific policy lines for domestic and foreign affairs. It only pledged to take an “eye for an eye” approach in dealing with the U.S. and South Korea and repeated its commitment to stronger defense capabilities. It remains to be seen what change North Korea may attempt, amid the deadlocked negotiations with the U.S. and the prolonged economic difficulties.