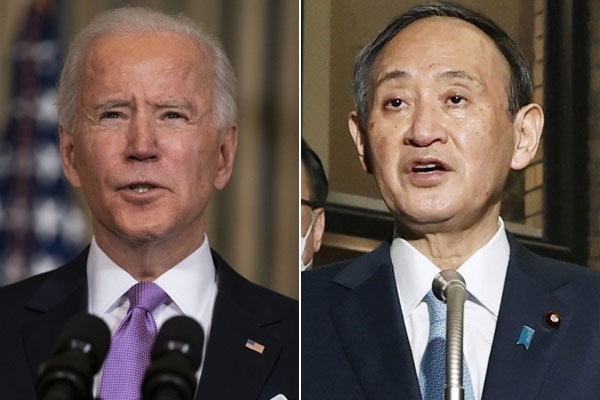 U.S. President Joe Biden talked with Japanese Prime Minister Yoshihide Suga over the phone on January 28. The American president’s first phone call with the Japanese leader since his inauguration shows that the Biden administration seeks to restore cooperation with allies to resolve the North Korean nuclear issue. Here is Dr. Oh Gyeong-seob from the Korea Institute for National Unification to explain what Biden and Suga talked about during their phone conversation.

The two leaders promised to strengthen cooperation within an informal security consultative group, known as Quad, which is the four-country alliance among the U.S., Japan, Australia and India. Apparently, the move is aimed to pressure China. Notably, Biden expressed the United States’ commitment to the defense of Japan under Article 5 of their security treaty. The two sides reconfirmed that the security treaty applied to the Senkaku Islands, a group of Japan-controlled islets that China claims. For Japan, this is a significant diplomatic achievement.

The two leaders also discussed regional security issues, including those related to China and North Korea. They affirmed the necessity of complete denuclearization of the Korean Peninsula and the early resolution of the issue of Japanese nationals abducted by North Korea.

Apart from bilateral concerns between the U.S. and Japan as well as the North Korean nuclear issue, Biden and Suga also touched on conflict between South Korea and Japan. It is speculated that the Japanese prime minister explained the dispute between Seoul and Tokyo over Japan’s wartime sexual slavery and forced labor. In the process, Suga may have delivered Japan’s unilateral view on these sensitive issues to Biden.

For South Korea, another disturbing part is that the leaders of South Korea and the U.S. held their first phone conversation after the Biden-Suga phone call. There are concerns that South Korea has been put on the back burner in Washington’s diplomacy. But the presidential office in Seoul says that the phone calls take place in an order decided by the White House in accordance with diplomatic traditions and therefore there is no need to attach particular significance to that order. Many analysts echo the view, since phone calls between the leaders of the U.S. and Japan have typically occurred before those between the U.S. and South Korea.

In the Northeast Asian and Indo-Pacific region, Japan is the most important strategic partner of the U.S.  It is true that the U.S. values the Japan-U.S. alliance in the course of implementing its policy of keeping China in check. The recent phone call between Biden and Suga reflects this. Of course, the U.S. thinks that the South Korea-U.S. alliance goes in tandem with the Japan-U.S. alliance, and it regards South Korea as another partner when formulating its foreign affairs and security policy. The order of phone calls shows the difference between Japan and South Korea in their diplomatic status. But for South Korea, what matters is making its own efforts to deal with security issues properly through any dialogue channel with the U.S., whether it is summit diplomacy or foreign ministers’ talks.

In fact, South Korean President Moon Jae-in and Chinese President Xi Jinping spoke on the phone on January 26 at the request of China. Some analysts say that the Moon-Xi phone call, which came before the Moon-Biden call, may send a wrong signal to the U.S. The Biden government has signaled its intention to put pressure on China and requests its allies, including South Korea, to join the drive. The U.S. may think that South Korea is in sync with China’s strategy to counter the U.S. drive.

But a key official at the presidential office in South Korea has dismissed the speculation and explained that the phone call between Moon and Xi had been discussed since last year even before the inauguration of the Biden government and that it was meant simply to exchange New Year’s greetings.

The Biden-Suga phone call came two days after the Moon-Xi call. Diplomatic circles in the U.S. may interpret this as a South Korea-China versus Japan-U.S. face-off. That’s because the phone call between the leaders of South Korea and China came at a time when the U.S. seeks to strengthen defense ties with its allies to counter China’s growing influence.

Japanese media, in particular, underlined this part, saying that Xi Jinping seems to be resisting the U.S. move to encircle China by tightening up its alliance. With the Biden government showing a hard-line stance against China and stressing cooperation among South Korea, Japan and the U.S., the Moon-Xi phone call may cause unnecessary, unintentional misunderstanding.

While the U.S. and Japan demonstrate their close cooperation from the early stage of the Biden government, some analysts point out that South Korea is making a different voice alone. U.S. Secretary of State Tony Blinken has said that the U.S. will review its entire approach and policy toward North Korea. The White House has also mentioned a “new strategy” on the communist regime. But South Korea still focuses more on a better relationship with North Korea than denuclearization.

President Moon, in particular, has mentioned the need to resume North Korea-U.S. negotiations promptly and to carry on the Singapore Declaration signed between North Korean leader Kim Jong-un and former U.S. President Donald Trump in their first summit in 2018. Moon has also named a new foreign minister in an apparent move to reactivate the Korean Peninsula peace process. Analysts say that it is urgent for South Korea to communicate and cooperate with the Biden government.

The Biden government stresses the alliance. Cooperation among the allies of the U.S. means that South Korea and Japan need to mend their ties.

That’s why experts are calling for the Moon Jae-in government to focus more on improving the Seoul-Tokyo relations, which have been extremely strained amid a series of disputes over historical issues.

The Biden government highly values three-way cooperation among South Korea, Japan and the U.S. when holding China in check and resolving the North Korean nuclear issue. The U.S. will likely strengthen this position even further. In the process, South Korea and Japan will be under heavy pressure to patch up their relations. Both sides need to engage in sincere dialogue to resolve their long-running diplomatic issues.

It is necessary for the Seoul government to boost cooperation among South Korea, Japan and the U.S. and also among South Korea, China and Japan, in order to respond to North Korea’s nuclear threats and pursue practical diplomacy. To this end, South Korea should improve its relations with Japan quickly. Amid the rapidly changing international politics, South Korea will have to find out ways to resolve the regional security issue.