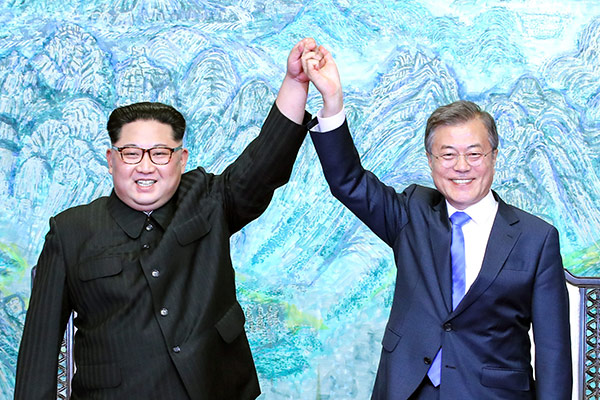 Dear people in South and North Korea and ethnic Koreans abroad, Chairman Kim Jong-un and I held a historic meeting and reached a valuable agreement. We solemnly declared before the 80 million Korean people and the whole world that there will be no more war on the Korean Peninsula and thus a new era of peace has begun.

With all eyes on the historic inter-Korean summit in the truce village of Panmunjom, the two Koreas declared that they would bring an end to longstanding division and confrontation and usher in an era of reconciliation and peace through the complete denuclearization of the Korean Peninsula.  Today, we’ll discuss what has happened to cross-border relations and diplomacy over the past year with Jung Dae-jin, a professor at the Ajou Institute of Unification.

North Korea’s missile and nuclear provocations continued until the end of November in 2017, when Pyongyang claimed to have successfully tested an intercontinental ballistic missile. As expected, relations between North Korea and the U.S. went from bad to worse, with the leaders of the two countries exchanging harsh rhetoric. Despite escalating tensions, the South Korean government proposed dialogue and its efforts bore fruit in the form of the April 27 inter-Korean summit in Panmunjom in 2018.

In the Panmunjom Declaration, the South and the North agreed to improve and develop bilateral ties in a comprehensive way, promote exchanges and cooperation in various areas and reconnect and modernize cross-border railways and roads. The two sides also promised to make joint efforts to ease military tension and eliminate the danger of war on their divided peninsula. In line with that, they held general-level military talks in May last year and signed a military agreement in September to implement the Panmunjom Declaration.

The military accord was a milestone in the process of halting hostile acts against each other in every domain, including land, air and sea. Seoul and Pyongyang also agreed to actively cooperate to establish a permanent and solid peace regime on the Korean Peninsula.

The successful South-North summit laid the groundwork for a summit between North Korea and the U.S later in the year.

On March 5, 2018, South Korean special envoys of President Moon visited Pyongyang and they announced that the two Koreas had agreed to hold a summit in late April. The summit materialized, and the joint declaration adopted at the summit addressed some crucial issues such as permanent peace on the Korean Peninsula, a declaration of an end to the Korean War, and denuclearization.

Following the significant declaration, the U.S. considered the possibility of finding a breakthrough in the North Korean nuclear issue through a bilateral summit, and the first-ever North Korea-U.S. summit took place in June. The Panmunjom Declaration is historically significant and played an important role in facilitating the unprecedented summit between North Korea and the U.S.

U.S. President Donald Trump and North Korean leader Kim Jong-un held their first summit in Singapore on June 12, 2018, and signed a joint statement calling for peace on the Korean Peninsula. It was the first meeting ever held between a sitting U.S. president and a North Korean leader. In July, North Korea returned the remains of 55 U.S. soldiers who died during the Korean War, fulfilling part of a promise Kim made to Trump at their Singapore summit.

Relations between South and North Korea also progressed rapidly. Bilateral cooperation and exchanges resumed, with the two sides opening a joint liaison office in the North Korean border town of Gaeseong and holding cross-border family reunions for the first time in three years.

About a year has passed since the Panmunjom Declaration was signed. Unfortunately, however, North Korea has made little headway towards denuclearization.

The second North Korea-U.S. summit ended without an agreement in Hanoi on February 28 this year, as the U.S. believed that no deal would be better than a bad deal. Since then, denuclearization talks have been at a standstill.

After Trump suddenly called off the June summit last year, the two Korean leaders met on May 26 to break the deadlock, and shortly after Washington said the Trump-Kim summit was back on. Citing this, some analysts say that now is time for another inter-Korean summit. It’s likely Trump and Moon discussed this and other steps during their summit in Washington earlier this month. I think Kim Jong-un needs to listen to the two leaders so that stalled denuclearization talks can move forward.

North Korea and the U.S. have expressed widely differing interpretations of denuclearization since the collapse of their second summit. And despite three summits between Seoul and Pyongyang last year, their relations seem stuck at the moment. As part of efforts to break the impasse, President Moon proposed a fourth summit with Kim last week. But North Korea has remained silent about the offer.

For now, North Korea is rather lukewarm about Moon’s dialogue proposal. I imagine North Korea needs some time to organize its own position. For the U.S., North Korea’s denuclearization is one of many diplomatic issues it is dealing with. For North Korea, however, it is a matter of survival. It won’t be easy for the North to make a decision on such a crucial matter or respond quickly to Seoul’s proposal. Some analysts speculate that North Korea is channeling its diplomatic resources away from South Korea and towards Russia. But I think the North is simply engaging in normal diplomatic activities with traditional allies.

Experts speculate that the summit between Kim Jong-un and Russian President Vladimir Putin on Thursday will have little influence on nuclear negotiations.

But the summit may make it more difficult for South Korea to mediate dialogue between North Korea and the U.S. Indeed, the South Korean president has been active as a mediator to keep denuclearization talks going, but it seems he faces difficulty in playing that role.

South Korea’s position is clear. It seeks to mediate between North Korea and the U.S. and persuade them to reach a compromise—a compromise between “step-by-step denuclearization” demanded by the North and the “one-shot deal” that the U.S. wants. South Korea suggests that Pyongyang and Washington make a comprehensive agreement on the complete denuclearization of North Korea, draw up a roadmap and implement it in a phased manner.

With both the North and the U.S. refusing to step back from their respective positions, however, South Korea has a difficult task ahead to find a compromise. For the U.S., complete denuclearization means North Korea surrender all nuclear capabilities and infrastructure, which, of course, is unthinkable for the North. In the course of mediating between the two, South Korea may appeal to those in the international community it believes have leverage in Pyongyang. But this may weaken Seoul’s relative diplomatic standing. Despite these challenges, I think South Korea should be patient and focus on its role.

South Korea looks to keep momentum alive for denuclearization talks through a fourth meeting between Moon and Kim. Despite the challenges ahead, Seoul has proven itself adroit in this space, as it helped orchestrate a reduction of inter-Korean tensions and the first-ever official meeting between Pyongyang and Washington. Hopefully, South Korea will continue to be successful in working towards peace on the Korean Peninsula.