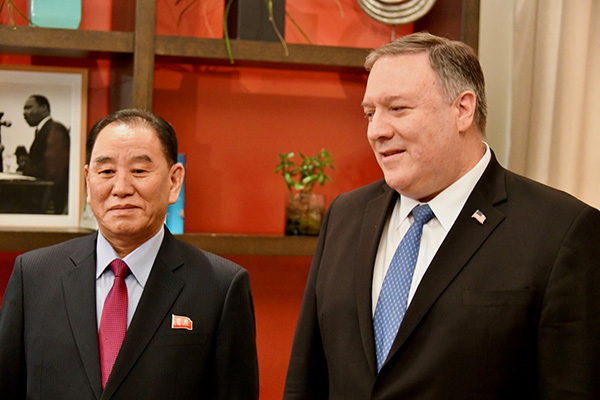 North Korea has replaced its top nuclear negotiator Kim Yong-chol, who led denuclearization talks with the United States up until the February summit between the two countries. He was absent from a list of senior North Korean officials accompanying leader Kim Jong-un on a trip to Russia for a summit with Russian President Vladimir Putin on April 25.

Two key officials were missing from North Korean leader Kim Jong-un’s entourage when he visited Russia last week. Kim Yong-chol, the vice chairman of the North’s Workers’ Party’s Central Committee was nowhere to be seen, and the leader’s younger sister Kim Yo-jong was not listed, either. The two had played an important role in the North’s denuclearization negotiations with the U.S.

Kim Yong-chol, in particular, accompanied the leader in all his summits with South Korea and the U.S. over the past year. The replacement of Kim Yong-chol, the director of the United Front Department under the Workers’ Party, is interpreted as Pyongyang’s intention to shift the focus of denuclearization talks to its foreign ministry and let the department deal with inter-Korean issues instead.

North Korea revealed a notable personnel change through the Pyongyang-Moscow summit, which marked leader Kim Jong-un’s first diplomatic summit after the breakdown of his second summit with U.S. President Donald Trump in Hanoi in February. The North replaced a hard-line military commander with a diplomat as the top official involved in negotiations with the U.S. A change is also being perceived in Pyongyang’s strategy for nuclear talks with Washington.

It seems North Korea wants denuclearization talks to start anew. In addition to the removal of Kim Yong-chol, the North also called for the replacement of Secretary of State Mike Pompeo, Kim’s U.S. counterpart. That is, North Korea no longer wants to run the negotiation channel between Kim and Pompeo, who were two key men in charge of previous denuclearization negotiations. Apparently, the North wants to draw up a new negotiation format.

During his policy speech last month, Kim Jong-un said that his nation was not thirsty for sanctions exemptions. Although it is urgent for North Korea to secure sanctions relief, the North has touched on another tricky issue of security guarantees, which might be a more difficult problem for the U.S. to handle, in a strategic move to gain what it wants from Washington.

Following their latest summit with Russia, it is speculated that North Korea has shifted its focus from sanctions relief to a guarantee of regime security in its strategy for denuclearization talks. In other words, the North has sent a signal to the U.S. that they need to start fresh negotiations.

North Korea refrained from harsh rhetoric against the U.S. after the collapse of the Hanoi summit, but it has recently stepped up criticism, calling for Washington to change its attitude. However, the U.S. remains firm in its previous position.

Even after the failed Hanoi summit, the U.S. has remained unchanged in its position on a one-shot deal with North Korea. The Trump administration consistently says that it can hold a third summit with North Korea only if and when it confirms that the North has accepted Washington’s request for a one-off deal to some extent. The U.S. is also maintaining its principle of keeping the sanctions in place until the North’s complete denuclearization.

U.S. Secretary of State Mike Pompeo has said that the process towards denuclearization remains bumpy and challenging. He also stressed the importance of cooperation from China and Russia on sanctions against the North, noting that economic pressure on Pyongyang will prompt the nation to implement denuclearization.

Kim Jong-un, meanwhile, has expanded his diplomacy to China and Russia in a bid to increase his diplomatic leverage and weaken international sanctions and strengthen his nation’s bargaining power with the U.S. Essentially, North Korea wants to create a new negotiation frame for nuclear talks with the U.S., on the back of China and Russia, both of which are trying to actively intervene in Korean Peninsula issues. However, for now, there is a slim possibility that China and Russia will lift sanctions on the North.

During its summit with North Korea, Russia remained rather circumspect about easing or lifting sanctions on the North, as they were apparently aware of Trump’s great interest in the Vladivostok summit. Before the North Korea-Russia summit, U.S. Special Representative for North Korea Stephen Beigun visited Russia, where he was widely speculated to deliver Washington’s view on the need to sustain sanctions against Pyongyang. China, for its part, has engaged in intense trade negotiations with the U.S. since last year. Both Russia and China still maintain sanctions on North Korea, since worsening relations with the U.S. will not be in their national interests.

The U.S. is taking a firm stance against the six-party nuclear talks. Russian President Vladimir Putin recently proposed resuming the multilateral nuclear negotiations to settle the North Korean nuclear issue. But White House National Security Advisor John Bolton has expressed skepticism about Putin’s proposal and “a phased approach to denuclearization” advocated by Pyongyang. But Bolton added that President Trump is still ready to have a third summit with the North when the time is right. The U.S. seems to think that the stalemate in nuclear talks with the North will be further protracted.

I think time is on the U.S.’s side. Comprehensive sanctions against North Korea have caused the country to struggle with economic difficulties and a shortage of foreign currency. North Korea’s brinkmanship tactic, if used, will only result in additional sanctions from Washington and prompt China and Russia to stop supporting the North. North Korea is facing difficulties in many ways.

The U.S., on the other hand, has secured some room to maneuver. Following the release of special counsel Robert Mueller’s report, Trump is believed to have eliminated a major hurdle in domestic politics, although controversy is still rampant. But there are growing concerns within the U.S. that North Korea is still developing nuclear warheads and materials as well as missiles. I think both North Korea and the U.S. feel the need to find a breakthrough through during a third summit.

Pyongyang and Washington share the view on the need for a third summit. Yet, North Korea is rearranging its personnel and strategy for denuclearization talks, while Washington has reaffirmed its stance of advocating pressure on Pyongyang. Against this backdrop, the two sides’ fierce tug-of-war, which has continued since the “no deal” in Hanoi, is likely to be more drawn out.