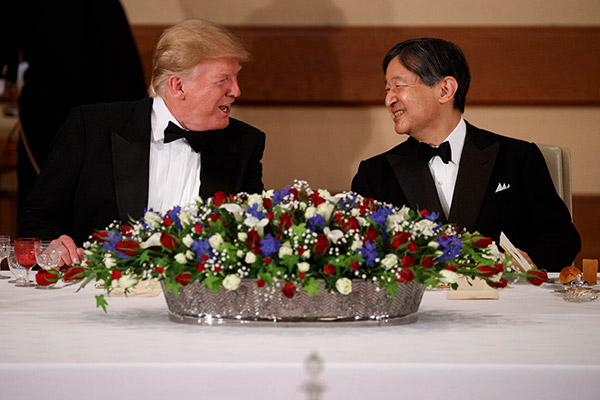 U.S. President Donald Trump paid a visit to Japan as the first state guest in the new Reiwa era. While Trump’s visit was focused on his strong ties with Japanese Prime Minister Shinzo Abe, the two leaders displayed contrasting views on North Korea’s recent projectile launches. Today, we’ll discuss the Trump’s visit to Japan and Tokyo’s diplomatic calculation regarding denuclearization talks between North Korea and the U.S. with Lee Myon-woo, vice president of the Sejong Institute.

As indicated by Japanese Chief Cabinet Secretary Yoshihide Suga, despite the slightly differing opinions between Japan and the U.S. on North Korea’s recent missile launches, Trump and Abe still implied that that they share the same view on how to approach North Korea.

Trump said that he visited Japan to congratulate the nation’s new emperor on his ascension to the throne and the opening of a new era. In this vein, at least, Trump’s trip is considered successful overall as he demonstrated a close relationship with Abe.

Trump was the first foreign leader to make a state visit to Japan since Emperor Naruhito ascended to the throne early this month. During his four-day visit, which started on May 25, Trump played golf with Abe and had breakfast, lunch and dinner with him to reaffirm the robust alliance between the U.S. and Japan. During a joint press conference after the Trump-Abe summit on May 27th, the Japanese prime minister also stressed that the two countries reached a complete agreement on their North Korea policies.

However, the two leaders evaluated the North’s recent missile launches differently. Abe said that the launches were a breach of U.N. Security Council resolutions, while Trump disagreed.

It was widely expected that Trump and Abe would bring up the North Korean issue at their summit, as Pyongyang’s nuclear and missile development is a grave security risk they have to address.

Trump has continued to say North Korean leader Kim Jong-un is well aware of the situation and that there is still room for talks. Abe, on the other hand, has been skeptical about North Korea’s abandonment of its nuclear weapons development.

While Tokyo and Washington share the same view on how to deal with North Korea overall, they could be in discord with each other on some specifics. This time, I think they revealed different opinions on Pyongyang’s missile launches.

During the joint press conference, Trump reiterated his position that there was nothing to worry in regards to North Korea’s two launches early this month, saying that he disagrees with his own advisors, who assessed that the tests violate U.N. resolutions. Trump downplayed U.S. National Security Adviser John Bolton’s claim that the projectiles the North fired were ballistic missiles. So, why does Trump continue to send a conciliatory message to the North?

Political reasons can explain Trump’s attitude. Some officials even inside the Trump administration are critical of his way of approaching North Korea, although they agree on the need to resolve the North Korean nuclear issue. Trump took a hard-line stance towards North Korea in the beginning, but he chose to solve the problem through dialogue. Now, he wants to keep dialogue with the North alive. Considering various factors, including next year’s presidential election, he may find it difficult to backtrack from his current stance.

It seems Trump’s conciliatory message has multiple purposes. By dismissing Bolton’s remarks, the president tries to appease North Korea and convince its leader Kim Jong-un of his commitment to their top-down approach to nuclear negotiations. In other words, Trump seeks to prevent the situation from worsening, keeping the North from making additional provocations and to resume negotiations in a political way to make his North Korea policy successful ahead of the 2020 presidential election.

Japan, in the meantime, showed a change in its attitude during its recent summit with the U.S.

Kim Jong-un has recently urged South Korea to stop acting as an officious mediator in the peace-making process. North Korea basically believes that it should negotiate directly with the U.S. to solve the sanctions issue. But it cannot exclude Japan in the course of getting sanctions relief. The North could receive economic benefits as a result of the normalization of relations with Japan. In this respect, Japan could play a significant role in addressing diplomatic matters in the region.

Japan is keenly aware of this situation and feels the need to approach North Korea more actively. While still expressing doubt about North Korea’s commitment to denuclearization, Abe has also demonstrated his willingness to meet with North Korean leader Kim Jong-un without attaching any conditions. This is a major shift from Japan’s previous stance.

With South Korea losing ground as a mediator between North Korea and the U.S., Japan is apparently posing as a new mediator in regional diplomacy. During Trump’s visit to Japan, Tokyo clearly disclosed its intention to intervene in Korean Peninsula issues, unlike in the past when it stressed the need for maximum pressure on the North.

In 2002, Japan admitted that its colonial rule of Korea in the early 20th century caused damage to the Korean people. Tokyo also signed the Pyongyang Declaration calling for Japan’s provision of economic aid after the normalization of its ties with North Korea. If and when bilateral relations are normalized, the North will likely receive more than 10 trillion won in economic assistance in line with the Pyongyang Declaration. This may turn the situation around for the North, which is currently unable to carry out economic projects with the South due to international sanctions.

If North Korea accepts Japan’s proposal, Abe will be able to dispel criticism that his country has been sidelined on the diplomatic stage when discussions of a nuclear-free Korean Peninsula are underway. Perhaps with this scenario in mind, Abe has emphasized his determination to push for a summit with Kim Jong-un. What matters now is North Korea’s attitude.

The key is whether North Korea will clearly show its commitment to denuclearization. The U.S. and Japan believe that strong international sanctions have prodded North Korea onto the negotiating table, while Pyongyang thinks that its powerful nuclear programs have enabled it to directly hold dialogue with the U.S. For now, it seems to be difficult to narrow those differences. I think the involved countries will engage in a war of nerves for some time to expand their influence in the region, and it may take a while for North Korea and Japan to improve their relations.

South Korea, North Korea, the U.S. and Japan have their shared goal of a nuclear-free Korean Peninsula. But when it comes to the resumption of nuclear negotiations, their calculations are different. And it is not easy to fine-tune their differences.

The South Korean government has unveiled a plan to promptly resume North Korea-U.S. dialogue through inter-Korean summit talks, but the North seems to be focused only on the resumption of talks with the U.S. Meanwhile, Washington is demanding that Pyongyang’s denuclearization come first before any sanctions exemption, while Japan is seeking to use the stalled negotiations between the North and the U.S. to broaden its own influence. With the countries each having different purposes, we’ll have to wait and see whether they will be able to find a solution to the North Korean nuclear issue.