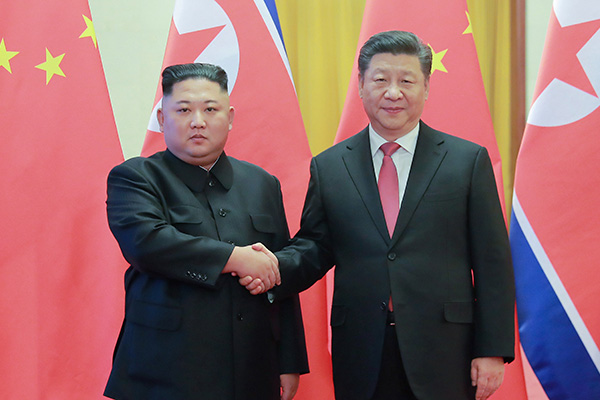 Starting with Chinese President Xi Jinping’s surprise visit to North Korea, there will be a flurry of summit diplomacy over North Korea’s denuclearization. A summit between the U.S. and China as well as a summit between South Korea and China will be held on the sidelines of the G20 summit scheduled for June 28th and 29th in Osaka, Japan. Right after the G20 meeting, a South Korea-U.S. summit will likely take place as well. Here’s Professor Chung Dae-jin from the Institute of Unification at Ajou University on the fast-evolving regional diplomacy.

It seems the Chinese president felt an urgent need to visit North Korea, as the announcement of his trip to Pyongyang came out of the blue. Although North Korean leader Kim Jong-un visited China four times over the past year, Xi had been delaying making a reciprocal visit to North Korea in consideration of various factors including North Korea-U.S. dialogue. Apparently, Xi made an abrupt decision to visit the North ahead of the G20 Summit, in a bid to secure one more negotiation card and bring it to the summit.

Both North Korea and China announced on Monday that Xi would visit North Korea on Thursday and Friday. It marks the Chinese president’s first North Korea visit since he came to power in 2013. When North Korean leader Kim Jong-un visited China in January this year, the two leaders agreed that Xi would visit the North in the near future. China had since remained lukewarm about a potential trip, but Xi is now in Pyongyang, indicating that Beijing hopes to expand its presence and influence in denuclearization negotiations.

China’s Foreign Ministry has said that Xi’s North Korea visit has the purpose of making progress in the political settlement of Korean Peninsula issues. We need to note that China used the word, “political,” not “economic” or “pragmatic.” On the surface, “political” settlement here means that China hopes to resolve the denuclearization issue through dialogue peacefully. At heart, it wants to lead the process of discussing a security guarantee for North Korea. Before its planned summit with the U.S. on the sidelines of the G20 later this month and a subsequent summit between South Korea and the U.S., China finds it necessary to remind the involved countries of its role in addressing political issues and settling peace in Northeast Asia.

Before the G20 Summit, Xi seems to be using his trip to North Korea as leverage in the ongoing trade conflict with the U.S. by demonstrating strategic cooperation between China and North Korea. Pyongyang, for its part, seems to be trying to pressuring the U.S. by boasting its strong solidarity with China and up the ante in future negotiations with the U.S. through its summit with China.

It is said that North Korea rearranged its chief nuclear negotiators after the “no-deal” in Hanoi. It seems the North has finished this process and finalized its official position on denuclearization. Now it is ready to inform China of its position before resuming negotiations with the U.S. When Kim and Xi met last year, North Korea said that the leaders, as members of the same military staff, would closely cooperate. It means the two communist allies have formed a united front to deal with the U.S.

North Korea seeks to gain more benefits through stronger ties with China rather than through three-way dialogue involving the two Koreas and the U.S. And through bilateral negotiations, the North wants to get a security guarantee and sanctions exemptions from the U.S. eventually. With this broader vision in mind, North Korea is attempting to form a big, multilateral diplomatic frame encompassing China and Russia. For North Korea, I think this is the main purpose of holding a summit with China.

It appears that North Korea is using China in a strategic move to resume denuclearization talks that have remained at a standstill since its failed summit with the U.S. in Hanoi. Previously, Kim Jong-un visited China to meet the Chinese president ahead of important events like a North Korea-U.S. summit. Xi’s visit to Pyongyang is expected to have a major impact on nuclear negotiations between North Korea and the U.S.

Around the G20 meeting, a series of bilateral summits will be held. South Korean President Moon Jae-in will meet Xi Jinping to be briefed on the result of his meeting with Kim Jong-un and figure out what North Korea’s situation is really like and what Kim’s true intentions are. It is also important for Moon to discuss with Xi how to deal with North Korea, especially in the run-up to his summit with U.S. President Donald Trump. As Xi is expected to hold a bilateral summit with Trump and Moon in Osaka next week after his meeting with Kim in Pyongyang, the Chinese president may deliver the North Korean leader’s message to both Trump and Moon. Therefore, the cards are in Xi’s hands, at least until the end of June.

Trump held a telephone conversation with Xi on Tuesday and confirmed that he would meet the Chinese president during the G20 Summit. In the meantime, the South Korean government says that it will not miss this opportunity to revive momentum for dialogue. South Korea and China have agreed in principle to hold a summit on the sidelines of the G20 and are now coordinating a specific schedule. The prospective South Korea-China summit is likely to focus on the denuclearization issue. At the following South Korea-U.S. summit in Seoul, Moon and Trump are expected to share their countries’ assessment on the result of the North Korea-China summit and discuss the prospects of future nuclear talks between Pyongyang and Washington.

There are promising signs for the resumption of North Korea-U.S. nuclear negotiations. In an unusual move, the involved countries will hold a series of bilateral summits in a short period. The next ten days or so, starting from Xi’s visit to North Korea this week, could be a watershed period for the denuclearization process and regional diplomacy.