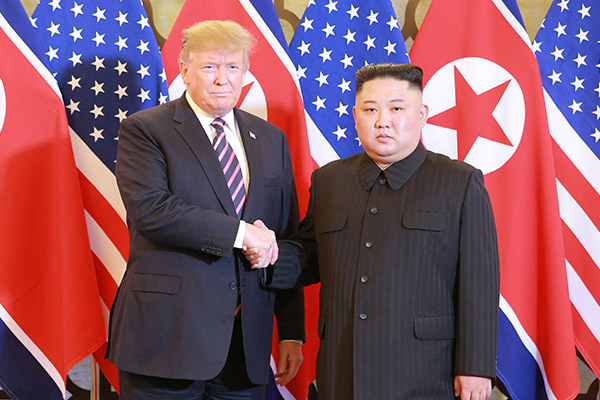 Both the U.S. and North Korea are telling different stories of what happened at the North Korea-U.S. summit last week. Here’s Shin Beom-chul, director of the Center for Security and Unification at the Asan Institute for Policy Studies, to explain the two countries’ reactions to and interpretations of their failed summit.

The U.S. claims that North Korea tried to get total sanctions relief in exchange for dismantling the Yongbyon nuclear complex alone, which the U.S. believes is an excessive demand. North Korea, on the other hand, says the U.S. is exaggerating.

It counters that it wanted only some sanctions lifted, specifically the ones introduced since 2016 as the North argues they are particularly damaging to the livelihoods of the North Korean people.

From Washington’s point of view, however, a partial lifting of sanctions requested by Pyongyang is, in effect, the lifting of all sanctions that are actually effective in pressuring North Korea. U.N. sanctions before 2016 were mostly designed to prevent North Korea from securing weapons of mass destruction. But the North didn’t feel the pinch of those sanctions very much. On the contrary, it continued to develop nuclear weapons and its economy kept growing. Since North Korea’s fourth nuclear test in 2016, international sanctions have been enforced in such a way as to levy pressure on the North Korean economy overall to discourage the development of nuclear weapons.

After the Vietnam summit broke down with no agreement on February 28, the U.S. and North Korea held separate press conferences explaining their interpretation of events. The U.S. said that the North wanted the lifting of all sanctions, while North Korea maintained that it was seeking only a partial lifting of sanctions from the U.S. Obviously, the two sides had different perceptions of sanctions.

[U.S. President Donald Trump also suggested that nuclear facilities other than the Yongbyon complex were a key reason for the collapse of the talks.]

North Korea is suspected of operating at least one or two uranium-enrichment facilities secretly, other than the one in Yongbyon.

South Korean media has reported on a suspected facility in the North’s Boonkang(분강) region, while the New York Times has cited a facility called Kangson(강선). If the suspicions turns out to be true, North Korea could continue to produce nuclear material to make atomic weapons at undeclared facilities even if it dismantles the Yongbyon facilities. That means North Korea may seek to possess nuclear weapons even after nuclear negotiations are over.

Apparently, North Korea had the intention of negotiating over the Yongbyon facilities alone during the summit in Vietnam. Contrary to Pyongyang’s calculations, though, the U.S. demanded more than that. Caught off guard, North Korea refused to discuss this matter, stressing that it was not negotiable.

South Korea’s National Intelligence Service explained on Tuesday that Boonkang is an administrative district where the Yongbyon nuclear complex is located. It seems more nuclear facilities, in addition to the one in Yongbyon, exist in North Korea. If the nation refuses to dismantle those additional facilities, doubts will remain over North Korea’s commitment to denuclearization.

As it appears North Korea put the lifting of virtually all sanctions on the table, it should have discussed the dismantlement of the Yongbyon complex AND other nuclear facilities as well. But the North was apparently unwilling to even discuss the latter, and the two sides failed to narrow their differences over the scope of Pyongyang’s denuclearization and Washington’s sanctions relief.

Perhaps more worrisome is Vice Foreign Minister Choe Son-hui’s comment after the unsuccessful summit. During North Korea’s press conference on March 1, she reiterated the phrase “a new path” which was used by North Korean leader Kim Jong-un in his New Year’s speech early this year.

In his New Year’s message, Kim Jong-un threatened to take a new path if the U.S. continues to pressure North Korea.

A different path here suggests that North Korea may declare itself as a nuclear weapons state, seek self-rehabilitation or adopt an anti-American policy in cooperation with China and Russia.

There are reports that North Korea has restored part of its Dongchang-ri missile launch site. There are concerns that the North may resort to provocations and resume a provocative stance towards the U.S. unless Washington accepts its demands.

Kim Jong-un has expressed a commitment to denuclearization of the Korean Peninsula several times. Given that, the North may have used the phrase “a different path” as a brinkmanship tactic in a bid to gain the upper hand if and when future negotiations resume.

Nevertheless, both sides have left the door open for continued dialogue. U.S. Secretary of State Mike Pompeo said on Monday that he believes the U.S. will send a delegation to North Korea in the coming weeks. Describing the second Kim-Trump summit, the North’s Korean Central News Agency said last week that the two sides agreed to meet again and continue a productive dialogue. But it is difficult to believe that talks will resume in the near future.

I don’t think North Korea-U.S. dialogue will resume anytime soon. A top-down approach could prove effective in moving negotiations forward. But in this case, the two leaders were in disagreement on some issues, and it will take time to narrow the gap between them. North Korea may need to reorganize its negotiation team. If bilateral dialogue is deadlocked for too long, however, denuclearization talks will lose steam.

Both sides are likely to stick to their respective positions and ask the other to make initial concessions for the time being. But eventually, the two sides will seek a compromise to achieve the ultimate goal of denuclearization.

The botched summit revealed the limitations of top-down negotiations and a disagreement between the two countries over denuclearization means.

For the negotiations to resume, therefore, it is necessary to adjust both the scope of Pyongyang’s denuclearization measures and the breadth of Washington’s corresponding action. In the process, South Korean President Moon Jae-in’s role is becoming increasingly important.

Acting as a mediator, South Korea has a challenging task ahead. It must listen to the positions of the U.S. and North Korea and persuade both sides to continue to negotiate, and on what terms.

First of all, North Korea must be willing to make real progress in denuclearization. Offering the Yongbyon complex only, while refusing to discuss other facilities, is a non-starter. If North Korea really wants sanctions lifted, it should present a clearer roadmap for denuclearization that includes what happens next following the dismantlement of nuclear facilities.

After drawing a more specific denuclearization plan from North Korea, Seoul should convince the U.S. of the need to take reciprocal action more actively in return for North Korea’s new and expanded measures.

In this way, the South Korean government needs to find common ground shared by the North and the U.S.

President Moon chaired a meeting of the National Security Council on Monday to discuss ways to facilitate follow-up negotiations between the U.S. and North Korea. With the South Korean president’s mediation diplomacy put to the test, attention is drawn to how he will keep dialogue momentum alive.