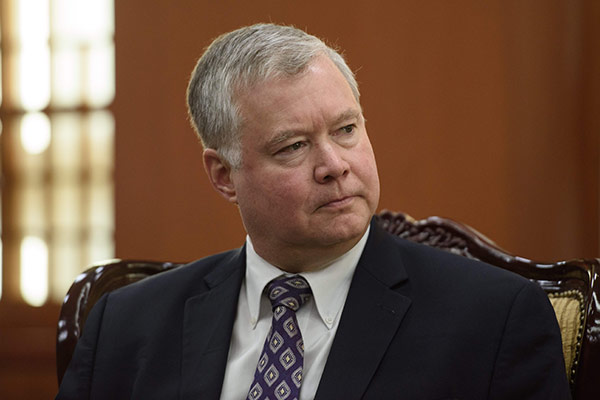 Key U.S. officials have clearly defined the scope of denuclearization they expect. For the U.S., denuclearization means the removal of all weapons of mass destruction in North Korea, including chemical and biological weapons, as well as ballistic missiles and nuclear weapons.

Regarding the method of denuclearization, the U.S. was partly receptive last year to a phased and simultaneous denuclearization advocated by the North. So, before the Hanoi summit, analysts expected the U.S. to maintain this position. But after the breakdown of the summit, the U.S. has decided on a one-off big deal rather than a step-by-step approach. This is the main difference between the two sides.

At the second North Korea-U.S. summit last month, the U.S. rejected a proposal that would have seen the dismantlement of the North’s Yongbyon nuclear complex in exchange for the lifting of all sanctions which Pyongyang says affect the livelihood of North Korean people. The U.S. countered that proposal with a demand that North Korea eliminate ALL weapons of mass destruction, not just nuclear weapons, in return for sanctions relief.

U.S. Secretary of State Mike Pompeo also said on Tuesday that North Korea is a real threat to the U.S. and urged the North to implement denuclearization with action, not just words. Why has the U.S. embraced a hard-line stance?

With North Korea ready to play various negotiation cards, the U.S. seems to have concluded that it will be difficult to achieve North Korea’s complete denuclearization if the whole process proceeds in a phased manner.

For the U.S. administration, there aren’t many measures that reciprocate North Korea’s multiple denuclearization steps. If the U.S. agrees to lift the sanctions suggested by North Korea at the Hanoi summit, in return for the dismantlement of the Yongbyon facilities alone, it will have to take additional corresponding measures in the future to extract further concessions from Pyongyang. But the U.S. has only so much it can offer. For this reason, the U.S. can’t accept a step-by-step approach to North Korea’s denuclearization.

The U.S. disapproved of the lifting of sanctions in return for North Korea’s dismantlement of its Yongbyon nuclear facility – in essence a partial denuclearization. This is due to concerns that the North may simply reactivate the facility later after getting what it wants. This is consistent with past behavior from North Korea.

Furthermore, there are signs that North Korea is restoring its Dongchang-ri missile test site. Against this backdrop, the U.S. seems to be leaning increasingly toward pressure against North Korea.

It appears North Korea’s state media channels have rearticulated that the country remains committed to the denuclearization track. However, recent reports from South Korea and elsewhere have noted activity at the North’s Dongchang-ri missile launch site and increased activity at a missile facility in Sanum-dong(산음동).

These reports have generated speculation that North Korea may give up negotiations with the U.S. altogether and take a different path, as North Korean leader Kim Jong-un hinted at in his New Year’s message.

But state media has made it clear that the North will push for denuclearization. It has also highlighted Pyongyang’s intention to hold follow-up negotiations with the U.S., saying that the two countries agreed to continue to hold productive dialogue to resolve the issues discussed at the Hanoi summit.

It’s the first time North Korea’s state media has mentioned complete denuclearization since the collapse of the second summit between U.S. President Donald Trump and North Korean leader Kim Jong-un. It may be that North Korea has finalized its position on denuclearization internally, or that such reports are geared towards international consumption, a sort of indirect message that the North will refrain from any provocative action that may aggravate the situation.

But the state media reports also indicate that North Korea will not abandon its preferred method for denuclearization easily.

North Korea clings to what it calls “phased and simultaneous” denuclearization. One of the regime’s propaganda outlets called Tongil Sinbo(통일신보) said on Monday that it is important to follow the principle of a step-by-step solution.

North Korea claims that it is impossible to disable its nuclear capabilities all at once in the absence of mutual trust between the North and the U.S. If North Korea declares its nuclear facilities, for example, it might only end up providing the U.S. with a target for an attack if their negotiations fall through. Pyongyang says that it is necessary to build trust first and implement denuclearization in stages.

To this end, North Korea calls for an improvement in relations with the U.S. first, followed by the creation of a peace regime on the Korean Peninsula and a gradual denuclearization process met with synchronized action from the U.S. This is what the two countries agreed upon at their first summit in Singapore last June. North Korea sticks to this format of denuclearization.

Both North Korea and the U.S. stress that they have left the door open for dialogue. Stephen Biegun has said dialogue with Pyongyang is very much alive, while North Korea continues to express a commitment to dialogue with the U.S. The key is how to narrow their differing views on denuclearization. Professor Park now talks about North Korea’s move to restore part of the Sohae Satellite Launching Station.

It is not very likely that North Korea will launch a missile from the Sohae rocket launch site, as such a launch would not only result in a rupture in North Korea-U.S. negotiations but may invite a major catastrophe in the two countries’ relations.

Trump, citing a spoken promise from Kim Jong-un not to conduct nuclear or missile tests, says North Korea does not pose a threat to the U.S. mainland. The American president touts this as his achievement. But even if the North claims that it has launched a rocket for benign purposes, the move will remind Washington of North Korea’s potential threat to the U.S. If that happens, officials within the U.S. will be skeptical about dialogue with North Korea.

North Korea knows this all too well, so it won’t likely launch a missile or take any other provocative action for the time being. But North Korea may believe that a back-and-forth with Washington has begun and may even have their eye on a third Trump-Kim summit. I think the North is using the rocket launch station as a means of increasing its bargaining power at future talks.

North Korea and the U.S. are urging each other to make concessions on different approaches. Their intense tug-of-war is likely to continue for some time.