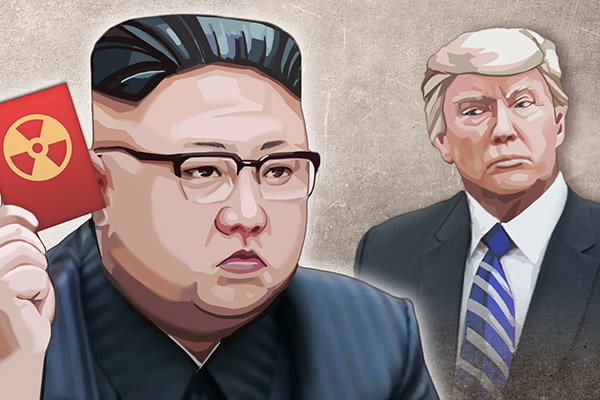 North Korea and the United States have been at odds since the breakdown of their Hanoi summit in February. The U.S. continues to stress that the North should move forward with denuclearization in a verifiable manner before sanctions are eased in any appreciable way. In response, North Korea has threatened that it may cease nuclear negotiations altogether. With more, here is Jung Dae-jin, a research fellow at the Ajou Institute of Unification.

During a press conference in Pyongyang last week, North Korea’s Vice Foreign Minister Choe Son-hui said that her country may consider suspending further nuclear talks with the U.S. She accused the U.S. of making “gangster-like” demands, which apparently refer to Washington’s insistence that Pyongyang’s fully denuclearize, dismantle the Yongbyon nuclear complex and much more. Choe said that the North would not engage in any negotiations of this kind.

It must be noted that Choe used the expression “consider suspending,” not “decide to suspend,” probably to urge the U.S. to ease its demands. She also said that North Korean leader Kim Jong-un and U.S. President Donald Trump maintain a wonderful chemistry, leaving room for dialogue between the two.

Since the collapse of the Kim-Trump summit, North Korea had remained mostly silent until March 15, when it suggested that it may stop nuclear talks with the U.S. and resume nuclear and missile tests. Choe’s press conference shows that North Korea has no intention to yield to U.S. demands. However, the door appears to remain open for top-down negotiations, with Choe saying that relations between Kim and Trump remain positive. Trump, meanwhile, seems to be more circumspect.

When Kim sent a letter to Trump last year, the US president showed it to reporters and described it as a “beautiful letter” from the North Korean leader. But there was no such reaction to the North Korean vice foreign minister’s remarks from the US president. Rather, Trump, perhaps feeling it unnecessary to respond to anyone but Kim Jong-un himself, has had his officials comment on the issue instead. It seems Trump is taking his time in reassessing relations with Pyongyang.

Despite opportunities to comment on North Korea, Trump has yet to speak publically on where things are at between Washington and Pyongyang.

It appears that the U.S. is focused more on keeping dialogue momentum alive, rather than engaging with North Korea’s every word. The U.S. may be concerned that both sides may lose hope if their negotiations are drawn out. Still, the U.S. sticks to its principle of “denuclearization first, rewards later.”

The U.S. seems to believe time is on their side. Now that it has clearly articulated its requests, it awaits North Korea’s preparedness for negotiations.

The reciprocal measures the U.S. can take are nearly all sanctions-related. Though the U.S. has some control over unilateral sanctions, the heavy lifting must be done at the U.N. Security Council. In both cases, the White House will have to convince others of the merits of lifting sanctions, whether it be Congress or the Security Council. Thus, while the two sides reassess, the U.S. invites a detailed roadmap from North Korea over how it will comply with Washington’s demands.

The U.S. remains unmoved by North Korea’s threat to walk away from talks. Speaking to the media on Tuesday, White House National Security Advisor John Bolton said that a new missile or nuclear test by North Korea would have a “real impact” on President Trump. But he added that a bright economic future remains ahead if the North Korean regime abandons its weapons of mass destruction and ballistic missiles. Bolton’s comments may be interpreted as a warning to Pyongyang as well as an emphasis of Washington’s push for a big breakthrough in nuclear talks. Attention now turns to what cards North Korea may play.

The North Korean vice foreign minister said that Kim Jong-un would soon announce the country’s plan on denuclearization. But it’s uncertain whether such an announcement is forthcoming, as the North Korean leader’s words obviously are highly important. Once announced, what the leader said cannot be withdrawn.

Kim may express his view on denuclearization during a full session of the Workers’ Party meeting in April or during the first conference of the newly-elected legislators of the Supreme People’s Assembly. But I think it will be difficult for him to mention anything negative regarding North Korea-US talks.

Choe Son-hui said that leader Kim Jong-un would soon make a final decision on whether or not to keep talking with the U.S. For now, it is hard to predict whether the North Korean leader will resume denuclearization talks or adopt a hard-line stance against the U.S.

If the U.S. is non-committal about additional negotiations, however, North Korea may try and play a more provocative hand.

North Korea may stoke tensions by preparing, or saying it is preparing, to launch missiles. But it is questionable whether the North will actually do so, as such an act – however benign the North may claim it to be – would cross a line set by the international community. Pyongyang has to precisely calculate the possible risk and rewards of doing so.

It is believed that the North Korean vice foreign minister indirectly served as a conduit for Kim Jong-un, who suggests that he and Trump make decisions on their own without lower-level officials. Both North Korea and the U.S. are taking their time and strengthening their negotiating positions for future talks.

In the last few days there have been reports that North Korea’s ambassadors to China, Russia and the U.N. have suddenly returned to Pyongyang. It is speculated that Kim Jong-un may decide on his country’s future course after examining the diplomatic situation in Beijing, Moscow, and New York, respectively.

North Korea and the U.S. have differing views on the denuclearization process. Amid a major setback in their negotiations, the world awaits the next hand each side will play.