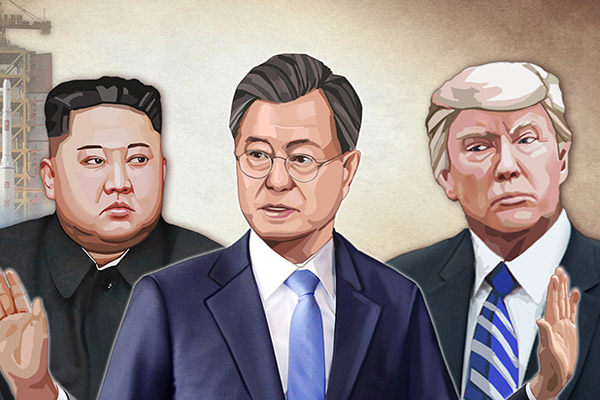 South Korean President Moon Jae-in and his U.S. counterpart Donald Trump will hold a summit in Washington D.C. on April 11. The meeting may have high implications for regional diplomacy after the failure of the second North Korea-U.S. summit in Hanoi in February.

Since then, several top South Korean officials have visited the U.S. to discuss post-Hanoi summit strategies. With more, here’s Oh Gyeong-seop, a researcher at the Korea Institute for National Unification.

South Korean diplomats and officials have flown to the U.S. to help sustain momentum for dialogue between North Korea and the U.S. Kim Hyun-chong(김현종), the second deputy chief of the National Security Office, met with U.S. Deputy National Security Adviser Charles Kupperman in Washington D.C. on April 1, to discuss and fine-tune talking points for next week’s South Korea-U.S. summit. Kim also met other senior officials and members of Congress to discuss North Korea-U.S. negotiations.

As ranking South Korean and U.S. officials have held a series of meetings in Washington, it appears that there is movement towards denuclearization talks ahead of next week’s Moon-Trump summit, which is expected to set the tone and priorities for related negotiations with North Korea.

The upcoming South Korea-U.S. summit is greatly significant as it could provide a breakthrough in resuming North Korea-U.S. negotiations, which have been largely stalled since Hanoi. As a mediator in nuclear negotiations, South Korean president Moon Jae-in must navigate between the grand bargain insisted upon by the U.S. and the sequential approach favored by the North.

It is important for President Moon to come up with a reasonable middle ground and discuss it with Trump, as well as induce North Korea to clarify its commitment to denuclearization. The scope and sincerity of this commitment will be an important factor.

President Moon's summit priority is to narrow the difference between North Korea and the U.S. regarding the scope and timeframe of the North’s denuclearization process. As Mr. Oh explained, the U.S. wants a one-off deal that removes North Korea’s nuclear infrastructure all at once, while the North is seeking a much more gradual scale back of its capabilities.

The U.S. demands that North Korea dismantle its Yongbyon nuclear complex and all other undeclared underground nuclear facilities, hand over all of its nuclear weapons and materials, and remove other weapons of mass destruction like biochemical weapons – all this before sanctions are lifted in any meaningful capacity. On the other hand, North Korea insists on removing sanctions in a way that corresponds to its step-by-step scale back of its nuclear program.

The South Korean government first needs to secure North Korea’s promise for complete denuclearization and a relevant roadmap. If the North agrees on this, Seoul then should persuade the U.S. to consider easing some sanctions against the North. Regarding sanctions relief, South Korea may bring up the issue of carrying out inter-Korean economic cooperation projects.

The goal of the South Korea-U.S. summit is to reaffirm bilateral cooperation on the North Korean nuclear issue, bring Pyongyang back to the negotiating table and attain substantial denuclearization commitments from the North. For these purposes, the South Korean government is likely to highlight its stance on a comprehensive agreement and phased implementation approach for the denuclearization process.

That is, combining the demands from Pyongyang and Washington, Seoul may suggest that the two meet halfway. The presidential office in Seoul has already said that South Korea should prepare a “good enough deal” that is acceptable to both the North and the U.S.

A positive outcome at the South Korea-U.S. summit may bode well for a resumption in North Korea-U.S. dialogue. Indeed, U.S. Secretary of State Mike Pompeo has hinted at the possibility of another meeting between the leaders of the U.S. and North Korea.

Pompeo said on Monday that he hoped President Trump and North Korean leader Kim Jong-un would meet again in the coming months and make significant headway towards ending North Korea’s nuclear program. Pompeo demurred on a possible time and date for such a meeting, but he did say that it’s in America’s best interest to resolve the issue as soon as possible.

His remarks suggest that the U.S. has left open the possibility of dialogue with North Korea and that it is receptive to a third Trump-Kim summit to discuss denuclearization. If North Korea shows a willingness to change its previous stance, there is a good chance that the two sides will make contact.

In addition to comments made by his Secretary of State, President Trump appears to be signaling to the North that he remains open to dialogue. He ordered the cancellation of new sanctions on North Korea late last month, saying that he didn’t think additional sanctions on the regime were necessary at the present time as the North Korean people are suffering greatly.

The reiteration of this view at the South Korea-U.S. summit next week may prove important to re-establishing talks between the U.S and North Korea.

At present, it is reasonable to envision a scenario in which another inter-Korean summit occurs at the truce village of Panmunjom, followed by a third North Korea-U.S. summit. The ball is in North Korea’s court.

The result of the Moon-Trump summit may tell us what shape and form North Korea-U.S. talks will take. To make the summit a success, it is most important for South Korea to make North Korea ensure a full commitment to denuclearization. If so, Seoul will find it easier to persuade Washington.

But if North Korea is unwilling to change its position, it will be difficult for South Korea to present a compromise plan to the U.S. Therefore, South Korea needs to communicate with Pyongyang before its summit with the U.S. and make efforts to secure a denuclearization commitment from Pyongyang.

Amidst continuing disagreement between North Korea and the U.S. after their failed summit in Hanoi, the South Korean government endeavors to mediate between the two. It remains to be seen if Seoul’s efforts will bear fruit.

North Korea will convene the first session of the 14th Supreme People’s Assembly in Pyongyang on April 11, the same day the South Korea-U.S. summit is scheduled. Many speculate the North will use the occasion to lay out its foreign policy priorities.

We’ll have to wait and see how what happens in the coming days, which are shaping up to be a crucial period that may determine the fate of North Korea-U.S. dialogue.