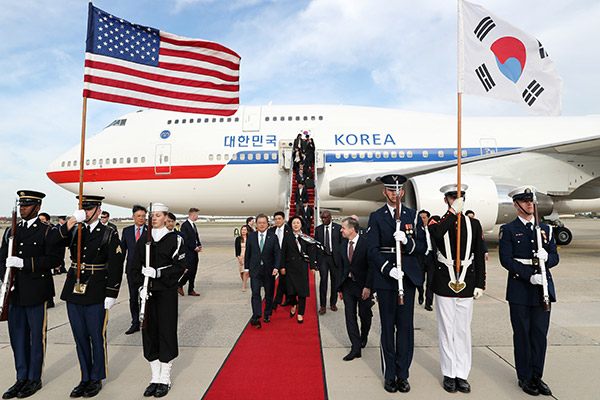 This month, major developments are anticipated in diplomacy surrounding the Korean Peninsula. Amid a stalemate in North Korea-U.S. talks following their unsuccessful summit in Hanoi, South Korean President Moon Jae-in has flown to the U.S. for his summit with U.S. President Donald Trump, while North Korea has convened a plenary meeting of its newly-selected legislature. Next week, the North will also commemorate the birthday of the late leader Kim Il-sung, a highly important occasion for the regime. With more, here’s Shin Beom-chul, director of the Center for Security and Unification at the Asan Institute for Policy Studies.

North Korea held an extended meeting of the Political Bureau of the Central Committee of the Workers’ Party on Tuesday and a plenary session of the committee on Wednesday. Major decisions made during these meetings were ratified by the North’s parliament, namely, the Supreme People’s Assembly on Thursday. The legislature revises laws, including the Constitution, and deals with budgets and a cabinet personnel reshuffle.

North Korea will mark the Day of the Sun on April 15, the birthday anniversary of the nation’s founder Kim Il-sung. There is speculation that North Korean leader Kim Jong-un may visit Russia sooner or later. Some analysts expect that another inter-Korean summit might be held to commemorate the first anniversary of the April 27 summit between South Korean President Moon Jae-in and North Korean leader Kim Jong-un in 2018. Or, a South Korean special envoy could be sent to Pyongyang.

For North Korea, April is a politically important month. The Supreme People’s Assembly holds a plenary session every April. The nation celebrates the Day of the Sun on April 15 and commemorates the founding anniversary of the Korean People’s Revolutionary Army on April 25. Among the domestic events, the Supreme People’s Assembly is the likely forum at which to announce the next step North Korea may take towards denuclearization.

New deputies are elected in nationwide polls for the legislature, although they are not elected by secret ballot, like in countries that value free democracy. The first meeting of the 14th Supreme People’s Assembly took place on Thursday to introduce the deputies who were elected in last month’s election to serve a five-year term. Since the collapse of the Hanoi summit, leader Kim Jong-un has focused more on domestic affairs than foreign policy.

He has recently inspected various local places such as a construction site in Samjiyon(삼지연) County, a coastal tourist area in Wonsan and a department store in Pyongyang, encouraging “self-reliance” and economic development.

But after the Supreme People’s Assembly session, the leader is likely to concentrate on diplomacy again. He may hold another summit with the South Korean president or visit Russia. Through these diplomatic outings, he may want to show to the outside world that his nation can survive without help from the U.S.

Last year, North Korea announced its decision to pursue dialogue with the U.S. during a meeting of the Central Committee of the Workers’ Party, which was held two days before the Supreme People’s Assembly. Some three weeks later, the North convened a plenary session of the committee and declared a new policy strategy focused on the economy, a shift away from the country’s previous policy which prioritized the simultaneous development of nuclear weapons and the economy.

It is widely expected that this week’s Supreme People’s Assembly will make clear North Korea’s post-Hanoi strategy and actions.

This month, North Korea’s main newspaper, the Rodong Sinmun, has consistently highlighted the message of “self-reliance.” It is expected to stress the same message again on the Day of the Sun on April 15.

Speculation is rampant that leader Kim Jong-un may visit Russia soon, as his de facto chief of staff, Kim Chang-son, visited Moscow last month. His trip, apparently aimed at making logistical and protocol preparations, is increasing the likelihood of the leader’s Russia visit.  The North Korean leader may use his Russia trip to show to the U.S. that his nation has options if denuclearization talks break down.

Kim will also signal to China that he won’t depend entirely on Beijing, considering that excessive reliance on the Middle Kingdom may restrict room for Pyongyang’s diplomatic maneuvers. By restoring relations with both China and Russia, North Korea may intend to gain some diplomatic leverage.

Kim Jong-un may soon travel to Russia in what would be his first trip abroad after the failed Hanoi summit. North Korea is apparently trying to take advantage of the 70th anniversary of an economic and cultural agreement signed between the two nations to improve ties with the Kremlin. Kim Chang-son, a key figure in Kim Jong-un’s inner circle, recently returned to Pyongyang following a week-long trip to Russia, further raising speculation Kim himself may visit Russia this spring.

There is also speculation among regional experts that Chinese President Xi Jinping may visit Pyongyang. Coinciding with the Belt and Road Forum scheduled for later this month in Beijing, Kim, Xi and Russian President Vladimir Putin may hold a series of bilateral summit talks and even a three-way meeting in the Chinese capital.

Another possibility is a fourth inter-Korean summit between Moon and Kim this month, given the South Korea-U.S. summit this week and the first anniversary of the Panmunjom Declaration adopted at the first Moon-Kim summit in April last year.

If the South Korea-U.S. summit proceeds well, and if the U.S. supports Seoul’s proposal for a “good enough deal” that is acceptable to both North Korea and the U.S., Moon and Kim may hold another summit around late April. And I hope the summit, if realized, will once again serve as a stepping stone to North Korea-U.S. dialogue. In the process, North Korea should implement some denuclearization measures that will satisfy the U.S. Of course, it will not be easy for the North to make such a decision. Considering its future, however, Pyongyang can’t go its own way forever.

North Korea keeps underlining the message of “self-reliance” internally, making some analysts suspect that the North and the U.S. may not find common ground after all. But reading between the lines, it’s fair to say that both Pyongyang and Washington want to continue engaging in dialogue. North Korea is refraining from provocations like missile or satellite launches, leaving the door open for dialogue. Trump also seems to be intent on finding new momentum for negotiations with the North. South Korea should display diplomatic leadership and steer the situation in a way that makes possible a summit with North Korea sometime this month and induces the North and the U.S. to hold their third summit in May or June.

Amidst a deadlock in nuclear negotiations between North Korea and the U.S., regional diplomacy might see a significant change in the coming weeks, depending on the results of North Korea’s Supreme People’s Assembly and the South Korea-U.S. summit this week.